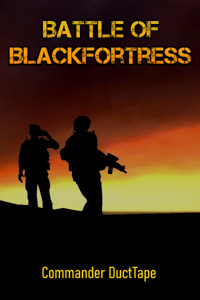 Update/Current status of the series

Long time, no posting, and I wish to apologize for that to every reader. Unfortunately between covid hitting my country hard, and my final school year being rather hectic as a result of it, I did not have nearly as much time for writing as I was hoping for. As such, my plans for the sequel(s) to Battle of Blackfortress have been delayed hard.

I am still very much intent on continuing this series, but as of now, I am awfully uncertain of when the next installments will be published. The plot is figured out at least for both the prequel and sequel novels. However, I will continue to update this particular chapter once a month at least, either with small progress updates or at least notes to let you all know that I did not abandon this project.

Status/Progress of the other novels

- Prequel (still undecided on the title): 3/4ths of the first act are done, and this one will be released first most likely.

The prequel would be about Agent Simmons, Platoon, and the Global Intelligence Service, detailing the events that led up to the New Azuno Federation's takeover of Blackfortress. Unlike BOB, this book would be closer to a spy novel as opposed to a military science fiction one, but there will be plenty of sci-fi elements all the same, as well as some much-needed world-building about the rest of Azuno. Since this will take place around a year before the Battle of Blackfortress, I'm considering releasing it as a separate fiction on RR, to not mess up the chapter order.

- The Sentinel of Malleus (sequel): First few chapters are written and I have the story outlined and ready to write. Just need to find the time to actually get it done.

The Sentinel of Malleus (or SOM) would be a direct continuation of BOB and it'd pick up roughly a month after it. Following the fighting around Blackfortress and the reveal of the NAF's existence, military forces all around Azuno have began a coordinated effort to root out the remaining Federation cells, although it is proving difficult as most of their leaders managed to avoid capture. Agent Simmons and Gunnery Sergeant Nichols are both doing their part in their respective agencies, but they both quickly find out that the NAF's influence runs deeper than either of them thought.

SOM would primarily follow the viewpoints of returning characters. Nichols, Simmons, and Riley McConnel of course will all be continuing their efforts to take out the NAF once and for all, and in Riley's case, to find the DSC Bluehammer. There will also be a 4th POV character, though I'm not revealing who they are just yet. ;) Similarly to the prequel, I am hoping to explore more of Azuno in this novel, with the Gredrurgian Republic, Esmos, and Sapphiria being the primary locations throughout the story.

And that is about it for now. As I wrote above, I will do my best to update this post at least every 30 days, though I cannot guarantee fast progress with all that is happening in the world (and my life) right now. I also wish to thank everyone who read my novel, in spite of its faults. Seeing the number of reads climb up to over 6400 over the past few months was certainly a sight to behold, and every single one of those reads gives me the motivation to continue my work! And as always, please let me know if you have any suggestions, or criticisms of the story so far, or the summaries I wrote here, as these comments help me figure out what needs to be improved in the story and in my writing.

Bio: I'm just an average dude from Hungary who has way too much time on his hands. I started writing a couple years ago as a hobby, partly because I wanted to practice and improve my English, and partly because there's just something amazing about inventing new worlds and people from scratch and then writing about their deeds and adventures.

At this point I honestly can't imagine myself putting down my writing pen ever again, and I would like to wish lots of luck to every other writer out there with their projects!