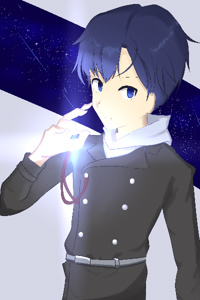 The sea of stars shining brightly. The momentaneous lifeforms that flicker far away. Humanity’s future — a sea brimming with light. Each shimmer in the sea represents one’s future of opportunities in the vast canvas that is humanity.

On a once unremarkable day, a mysterious girl displayed powers beyond the capabilities of humans in front of many onlookers who knew only the ordinary: Powers of Ice creation.

Riki, a normal young man in the midst of the crowd, was astonished to see such a spectacle, but this astonishment quickly transforms into dismay. From the appearance of calm, yet scorching blue flames, he realized the sole reason she was using powers in the first place was to only protect herself from two who have possession of powers akin to hers. And in failing to do so, the last thing Riki saw was the angst look in her eyes before she disappeared from his sight.

That was the only one remaining memory he can recall.

Thrusted into an organization filled with supernatural stargazers, Riki's only goal is to retake everything back: a journey to take back both his past and his future. Through this journey, it will mean to discover the underlying truths of the world.

To those who are doing their best.

To you, the brightest stars, smiling through any weather.

A little headway into the 2nd arc and I think this deserves a review by now. I'm liking this style of writing, and there are few if any grammar flaws at all. The dialogue between characters is fun, and I'm finding the story to be pretty engaging thus far.