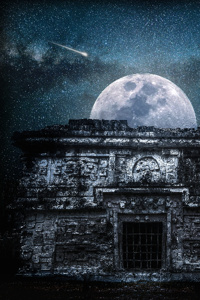 Another Promising Premise Goes Down In Flames

Reviewed at: An Old God

I write reviews with the best of intentions and hope for both the author and potential reader to take something from them. Unlike many reviewers (be they also authors or just readers) on Royal Road, I tend to see stories with 2-3 stars as being able to be enjoyed. This story however really pushed the limits and made me have to give it a below 2-star rating.

I do believe that the premise of this story is fascinating. An occult researcher going to different areas and discovering things would have been wonderful to read. Unfortunately, everything that I could have hoped for crashed and burned before my eyes.

I originally came from Quotev, a quiz, and fiction website infamous for the 2nd pov stories. 2nd pov is the most popular and common story there, and it makes sense since it is the most obvious way of filling in a self-insert and not having to deal with creating characters and dealing with their baggage. I am quite familiar with such stories, and I thought I left that Hades behind me. Seeing and reading this story caused war flashbacks to the great ship wars of Quotev among other controversies and I hope I do not see another 2nd pov any time soon.

Now onto the details of this story while they are fresh in my mind.

I found the grammar serviceable. There were a lot of issues with tenses and common grammar which managed to take me out of the story more than once. However, compared to everything else, it was rather good.

The narrating style is simplistic, to the point they feel little more than an outline or a script from a play or movie. It is insanely hard to follow the progression of the story. There are no descriptions or sense of setting and beings and it feels like the MC/YOU are in a void while everything else happens around them.

The narrator is the character mentioned in the synopsis which is fine enough. There is no information on his past, life, or connections. We know nothing about his job, the responsibilities of his position, who employs him, and countless other details that are completely absent from the story. There is nothing to ground the character and since this is a reader-insert and we are supposed to be him, there is no reason why we would be there or care about him.

My suggestion is to do a complete rewrite to flesh out each event and moment more. It would be best to be a first or third pov and to have his character so we as readers can connect more to the world and the events.

As it is right now, I can not recommend this story. I hope it improves in the future as the premise is interesting.

Reviewed at: An Old God

The section of this story that has been written so far begins and ends with Dr. Caville, someone entangled with "you".

This story may be about "magic", but it really seems to be a means to murder.

This story takes a dystopian view to "solve" problems.

Here is a non-spoiler quote to illustrate my point:

'Nonplussed, you sit back, staring at the lines in the floor. What was the solution? What would the Mayans have done?

Both the "bad" guys and the "good" guys are doing their best to solve their people troubles permanently.

If you enjoy reading about on-screen second person dispatching of people, then maybe this story is for you?

Reviewed at: A New City

Hey, I'm writing reviews with the absolute best stories I have read before, in mind. That said, most of my reviews are below that mark. Stories with 2-3 stars are in my opinion stories that are still perfectly enjoyable.

Tl;dr: The story is below 2 stars however. Other people may enjoy it more, for example if they have more vivid imagination than me, or if they savour the short chapters the story thankfully comes in.

Now to the details, the grammar isn't that bad. I may have overlooked spelling mistakes on my cursory reading. But I did notice some time slips, where the story deviates from present tense to past perfect.

Which leads to style. The story is kept in second-person narrator, which is totally fine in a choose-your-own-adventure story. This is not a CYOA tale, so it definitely feels off (my main reason to rate style so low). Aside from that, the narrating style is simplistic, and almost bare-bone... to the point where it is hard to follow the progression of the story, because only a few words indicate that from one paragraph to the other, the location or the mood of the situation has changed. A flow of the story never comes up - at least not for me as the reader. The author may have had an opulent scenery in front of his eyes... but it is lost in translation.

Which leads me to the character score:  The narrator is the scientist mentioned in the synopsis. It's however an occult-version of Indiana Jones, jetsetting between all mystical locations in the world. How he came to be in his position, who employs him, and who gave him the outrageous tools he routinely handles without having even scientific names for them... no mention. In fact, the synopsis tells more about the whole scenario, than I absorbed from the first chapters themselves. What irks me about the character (again) is the second-person style: I the reader am supposed to be the main character, I am told to have (supposedly) a vast academic background and yet I am not given agency on how the story progresses.

The story itself goes with the premise that we're in the regular world, and there is no magic. Yet, the MC scientist routinely does occult stuff apparently without expecting that to have any effect, just because he is told by the mysterious employer. Yet suddenly he is surrounded by magic(al creatures) everywhere, and is hunted by them, while he still Indiana-Jones-es around.

Checking the chapter progression, I found that there was an almost 2-year hiatus, but the first two new chapters after the break seem to continue exactly like the story was before the hiatus, so there is at least consistency.

My suggestion to improve the story is to flesh everything out more, and show the motivations of the protagonists, the background of the setting. And yes, possibly the best thing to do is dropping the edgy 2nd person narrator.