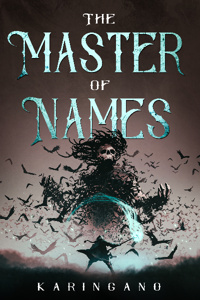 The Master of Names

Remove Ads
Next Chapter
A note from Karingano

Keldon stumbled through the smoldering ruins of an unknown city, the landscape warped by the presence of the Devoid.

The remains of the gleaming white walls floated static in the air, held in place by an invisible force. The fallen spiral watch towers had sunk into the ground like quicksand, leaning into the earth as the stone and soil had melded together, forming an unnatural landscape.

Then, he heard a creak. He barreled to the side, dodging just in the nick of time to avoid being crushed by a dark metal pillar as it toppled over with a thud. His heart pounded against his chest.

"Adding that to the list of near-death experiences, I guess." he thought, brushing the white dust off his messy brown hair.

A rumble scurried up Keldon's feet as Devoid Siegebreakers -which stood over fifty feet tall- trampled through the city in the distance. The beast-like monstrosities were covered from tip to tail with plates of bone armor overlapping the eight trunks of muscles that held up their massive form. Twenty beady eyes grown seemingly at random danced within their sockets as the air itself seemed to bend around the creature, moving in strange ways.

Swarms of Devoidlings --squat insectile creatures the size of a hound-- skittered over the wake of destruction, grinding down the stone with their maws of gnashing fangs.

The strange architecture from his last two dreams surrounded Keldon. Tall isolated white buildings, topped with bright golden crowns. Uprooted from their row by row placement and singed by the flames of catastrophe. Black snow drifted down from the heavens, blanketing the rubble of a ruined city as the sounds of raging battle and pleas for help filled the air.

He shivered, quickly getting out of the open as he watched the Devoidlings scuttle over the wall a ways away. Keep to the dark screamed his instincts. But where to hide? Even in his dreams, he couldn't use magic.

Eventually, he found an isolated wooden shack, spared by sheer luck from the surrounding destruction. However, as he jiggled the doorknob to his safe haven, it was locked. Clicking his tongue in annoyance he got to work, quickly searching the yard.

"Aha! There's no way a place like this wouldn't have a laundress" he said, grabbing a bra that had been hung out to dry alongside a long row of various garments. He quickly dismantled the underwear, pulling out a thin wire from its corpse and tossing it to the side. Returning to the shack as quietly as he could, Keldon fiddled with the lock and was rewarded with a small click as he crept inside.

"Still got it," he thought with a smirk.

Entering the shack, Keldon noticed a shattered porcelain teacup on the oak floor. Careful not to step on the remains, he scanned the room. Shears, brooms, and watering cans laid scattered on the ground, fallen from their hooks. Keldon tiptoed around the room, quietly shutting the door and pressing his back underneath the ledge of the cracked window that faced the streets. Around him, broken mirror shards littered the ground. He picked up a piece and angled it outside.

"Now, who's out there…” thought Keldon, tilting the piece of the mirror around.

He'd learned from his last dream - the hard way- that Devoidlings were sensitive to their environment, quickly swarming and rushing down anything that stood in their path if detected.

His patience was rewarded as waves of clicking chitin against stone approached him. The rhythmic tapping of knife-like legs against the stone street cut through the air as Keldon glanced at the writhing mass of death.

His eyes widened, seeing the tsunami of mandibles and razor-sharp legs, bristling with maws that dripped with hunger. Every hair on his body stood upright as his chest tightened, watching and listening to the horde of horrors that crept closer to his location. Their movement was eerily silent for such a horde, hearing only the rhythmic tapping of life-ending sharpness against the stone street echo from outside the shed. He'd caught a brief glimpse of the Devoidlings in a previous dream, but never this many and especially not this close.

“For a supposed dream, these creepy little bastards really make my blood run cold.” Keldon thought, furrowing his brow. However, despite his best efforts, he couldn’t shake the feeling, terror gripped his hands.

“I need to figure out what’s going on this time.”

But at that moment, his hand moistened with sweat, accidentally let slip the shard of glass.

Without thinking he lashed out, grabbing it by instinct. But as his hand instinctively wrapped around the piece of glass, a sharp hot pain shot from his hand. He let go. The shard plummeted to the floor, as Keldon recoiled from the pain and jerked backward, knocking his shoulders against the wall with a thud.

The shard fell as a soft crack echoed through the air.

Keldon's mind raced, adrenaline pumping as he looked down at the broken mirror shard.

“Should I run? No. That wouldn’t do anything, they'd catch me instantly and I don’t even know where i-“ he thought, but was interrupted by the return of clicking chitin against stone, this time, rushing him rather than scurrying past.

“Damn... welp, here goes this dream." thought Keldon, resigning himself to his fate.

The Devoidlings moved in unison towards the shack, tearing through the streets and the rose bushes. As the creatures nearly reached him, Keldon heard a booming voice echo in the distance.

“Foul monstrosities, return to the hole from whence you came!!” the voice howled.

Keldon blinked, opening his eyes and peeking through the doorway. He could barely make it out but there, in the middle of the sky, floated a man in a billowing grey robe. He had ashen white hair and despite the distance, Keldon could feel his eyes as old as time. He exuded a regal presence, commanding respect with his aura alone as he closed his eyes and extended his hand as if he were grasping the earth itself. His steely gaze gave the Devoidlings pause as his lips parted and he spoke.

And the earth began to rise. The walls that hid Keldon were ripped out from the floorboards as Keldon watched in sheer amazement. All around him, thousands of tons of rubble and flailing Devoidlings alike floated into the air above, melding into an enormous sphere of earth and eldritch, clumping together in the middle of the air.

And then the man spoke again.

Keldon felt the earth tremble as he looked down towards his hands. Around him, the shattered pieces of the mirror bounced and clattered as the ground shook.

Beneath the floating sphere of earth suddenly erupted a gargantuan beast, deep blue in color with jagged white spikes that streamed down the sides of its towering cylindrical body. The creature’s jaws were as wide as the sphere was large and in one snap of its enormous jagged toothy maw, swallowed the sphere whole, returning to the earth as quickly as it had appeared.

A moment of silence passed as Keldon sat stunned in silence, his knees quaking in awed fear.

Then, the man spoke once more, this time too quiet for Keldon to hear. He sat up, straining his ears trying to hear anything that he could, to try to figure out the identity of the man. However, by then it was too late. The man had already turned around and flew away, leaving the area for another sector of the city.

“Dammit!... Maybe if I hurry up, I can catch up to h-" thought Keldon, getting up to chase after the floating man.

However, white-hot pain flashed through him as he looked down to his chest, only to be greeted with the tip of a sharp black point coated in crimson blood. Slowly, he craned his neck only to come face to carapace with a pair of soulless beady yellow eyes.

As his vision faded to black.

Note: If any newcomers are confused by the comments, I've rewritten the first chapter a few times to fix wordiness since when i first posted it. I've kept the content the same for continuity purposes but cleaned it up for easier reading. Thanks for checking it out!

Bio: Hi there! Just a writer for fun who's trying to improve his skills and tell his stories!

First. Found a typo: [ in the earthshimmered ] you forgot a space. Anyways, it's a well-written and interesting first chapter!

Fixed! thank you very much!

BTW Eyeing his environment, he seeked a place of refuge

The past tense of seek is sought not seeked. 😄

good catch! thanks for reading!

I like the way you start with action, but it would be easier for meto get involved if I knew if this was the good guy or the bad guy or someone who didn't remember.

How does he know the creature are called the Devoid?

I love this intro, but I found the placement of the description of the character to be abit jarring, I don't think it's necessary to be told how the character looks like in this chapter unless if he was looking at his reflection

I reread it over and i agree! Thanks for letting me know!

"Black jagged plates jut out and floated around the creature..." 'jut' should be 'jutted' to match tense.

"Devoidlings: -squat insectile creatures the size of a hound- skitt..." the ':' should be removed, and usually the '-' is doubled as '--' (or use the longer character version).

I liked it, though I wished the dream went on for slightly longer. Perhaps add more emphasis on why this dream is similar to previous dreams or different. I know you are probably trying not to reveal too much in the first chapter, so it may be difficult.

A few comments below:

"A rumble scurried up Keldon's feet..." why just up his feet? why doesn't it shake the whole building and rises up through his feet?

"“Dammit!... Maybe if I hurry up, I can catch up to h-“Keldon thought, getting up to chase after the floating man. However, white-hot pain flashed him as he looked down to his chest, only to be greeted with the tip of a sharp black point covered in his own blood. He slowly turned around, coming face to face with a pair of soulless beady yellow eyes."

How does he turn around with the tip coming through his back?

Interesting start and I am planing to read more. As per your post, if you would read my chapter and provide feedback, I would appreciate it.

Good catches! I edited the chapter to make it more clear!

I'll add your chapter to the queue!