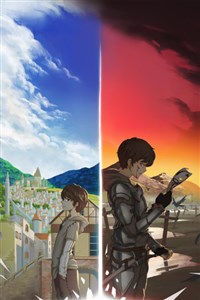 I still can’t believe with all the places we’ve traveled to, we’re back where we started. It’s funny how it always seems to come full circle for everything. I have a feeling this has something to do with my true purpose. It’s connected with my father’s will. I know it.

What he said echoes in my mind, “Stop dwelling in the past and prepare your strength for a bright day.”

Gibberish without context, but with the riddles that we’ve solved and secrets we’ve uncovered, it makes sense. It must mean that he’s figured them out too. Has he known everything from the beginning? It annoys me that we might’ve been dancing to his tune this entire time. But that’s fine because the truth is what it is. I’ll discern for myself whether the truth is fact or fiction.

With that in mind, his actions don’t add up. There has to be more, much more. If our theory is correct, there will be a load of information at our destination. We’ve been there before and saw nothing. There’s already only a few who know of that place. It must mean that someone managed to stash a large amount of knowledge there. That’s what I want to believe. Otherwise, we’ve traveled to over a hundred different villages for nothing. It might be everything that the Humans hid, but who knows.

I arrive at ‘The Simple Forge’. Popular as usual; the place is completely deserted. He should thank me for staying a loyal customer, but he’s earned that much. I’ve always received fast, quality service from him. A part of that might be due to having few customers which is convenient for me. I owe him for setting me on the right path in the past too, so I want to support him whenever possible.

He stands up from a chair and says, “Oh, it’s my favorite customer, Kai. It’s been a while. What brings you to Byzia?”

“Well, you can fill me in another time. What can I do for you?”

“Maintenance on my weapons. Hold on,” I say and set down the sack of fish on the ground.

He walks over and takes a look. “What the hell are you lugging around a sack of fish for? That can’t be all for your adventurer group. That’s too much.”

“Oh, yeah. This is mostly for our…companion. He eats once every few days. Anyway, here are my weapons,” I say while unclipping my swords. I set them on the table.

“Companion? Don’t think I want to know,” he says and stares at the blades on the table. He knits his eyebrows. “All of these are your weapons?”

“Two more than last time…” he mutters and briefly unsheathes them one at a time. “All Mithril nonetheless.”

He laughs and then asks, “You don’t possibly use all four of these at once, do you? The two new ones are lighter and shorter in length. It’s a different fighting style isn’t it?”

He widens his eyes and stares at me for several seconds. His eyes point down and then up. He answers, “Nah, I think I’m good. I don’t want to know that either.”

I laugh. I want to know what thoughts ran through his mind. How does he think I hold all four at once? One blade inserted between my toes for each foot? Or clenching a sword with my teeth and the other between my legs? I’ll let it go.

He asks, “How soon do you need this done?”

“A day’s probably fine. Plenty of time. We’ll be here for a few days. I recommended your shop to a friend of mine too. He’ll stop by after a few drinks.”

“Oh, one of your team members? So, is he the dirt-loving midget, backstabber, moss skin, or the—“

“I’m gonna stop you right there. We changed our team name recently, so forget our old one,” I inform. I don’t need him to remind me of our awful team name. The only change was the addition of another name, but he doesn’t know that. I’m cursed with bad team names forever. Is an ordinary name too much to ask for? I don’t want the name to spread any more than necessary. “It’s another long one. I don’t remember it. By the way, have you heard any rumors about Cascabel lately?”

“Not much about them these days.”

I figured. They haven’t been very active. Not since he’s made a public appearance. We don’t know whether or not he stepped down from Cascabel either. He’s bound to make another showing soon. That’ll be our cue.

“That reminds me. You could probably give the Phantom Swordsman a run for his money, considering you use four swords at once.”

I chuckle. “You’re right. I could. I met him, that’s how I know I could take him out easily.”

“Pretty much. I know him really well. Wanna know more?” I ask. He stays silent. Sometimes, ignorance is bliss. He knows that. I’m teasing him too much. I’ll ask him something else that matters. “What do you think of the Queen?”

“Hmm… At first, I thought she was too pure, innocent, and inexperienced to do the job well, but she has an eye for people. It reminds me of her father in his early days. With the help from Osmir and her advisor, I’m sure she’ll do well for the foreseeable future.”

“I see.” That’s good to hear. I’m sure she’s doing a good job, but having the people’s approval is important too. It’s one opinion of many that make up a whole. I pick up the sack of fish. “Well, I’ll be back later to pick up my weapons.”

I walk out the door. So, it was her that was following me. A familiar face is hiding around the corner. She always manages to slip the guards and find me on the same day. I sigh. She never learns her lesson.

I think to the day we met. Now that I think about it, everything started on that day. He was responsible for putting me on that path too; beginning with the assassination of General Dae. A chain of events transpired that led to discovering my purpose. Did he play a role in every one or was it just a coincidence…? Or was it fate?

I would never have imagined that I would put revenge in the backburner back then. But, there are more important things to worry about. The world is at stake. All life could end as we know it.

I shouldn’t keep Rocky waiting too long. At the same time, I can’t ignore her now that I’ve seen her alone. I’ll have to bring her with me for her safety and educate her on how to hide from someone properly. I walk over to her and say, “Hey…”