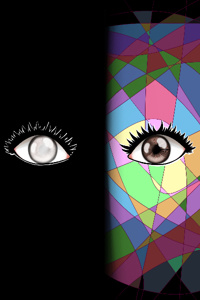 Feels a bit like a Nat Geo documentary, this one. One that has some magic and stuff...

Vast swathes of green and golden and brown blanketed the low hills and knolls for at least a few miles before Bloom’s eyes. A soft breeze kissed the tips of the grasses. It spread like a gentle wave across an ocean surface as it brought the scent of flowers, greenery, and wet earth to her. A visual music. A breath of comfort for her newborn eyes, as well as her other senses after all the loud, explosive spectacles of battle.

She took a deep breath, washing away all the stress clogging her nerves these days. Refreshing! If she was out to enjoy herself here, she’d definitely take a nap on that soft bed of grasses.

But she had a goal.

On the other side of this prairie, where the height of the landmass started a gradual shift, the layer of greenery gave way to barren grey and brown of sand and rocks. From there, tall structures of reddish stone spread as far as her eyes reached, like the spine bones of a sleeping giant.

Bloom sighed. She enjoyed taking a walk with her newborn legs. But that’s a lotta ground to cover.

Leaning back on the trunk of the tree she sat on, she let her eyes drift over the grassland. Thoringar had described the Field of Valerie as a place she could grow stronger, and she could see why.

She had obstacles to overcome.

Two-headed Dicrocerus. As their names suggested, each of those fifty animals, which her visual memory identified as deers, had two heads extending from their shoulders. With a set of thick twisted antlers on each, one head buried itself in the grass, the other alert, keeping watch over everything around them.

And that’s just level 30. The weakest.

Grazing right next to them were the Thermal Skullbisons. Over twenty huge, elephant-sized creatures with a pair of twisted black horns curved around the skull like helmets covering their heads. They were about level 35 average.

What was more, each of those herds had one beast that surpassed the others. A level 40 Three-headed Dicrocerus, and a level 45 four-horned Thermal Skullbison.

Must be what they call a boss. Bloom smiled inside. Sounds kinda like a… corporate job.

But these were still herbivores. Who knew what kind of other things lurked among those tall, dense grasses.

She tilted her head, gaze shifting to the longer grasses beside the grazing spot of the herd. Did she imagine it?

“Oh!” She gripped the branch extra hard and leaned forward as far as she could. There was something. A little hard to see, but the grass around the animals had some slight signs of movement.

Bloom shook her head. Though it kinda looked like that, her instincts warned her, things weren’t that simple.

She kept her eyes peeled, watching those movements slowly slither toward the two herds. Soon one of them passed through a shallower patch of grass, giving her a glimpse of its true nature. A beast draped in a long, green coat that blended perfectly with the surrounding vegetation. The sturdy, muscular, physique reached at least half the size of the bison. Its tail twisted, Four sharp, angular ears standing straight as it crouched below the surface of the grass and slowly inched towards the grazers.

Valerian Grasslions, or lioness to be exact. The first predators of the grasslands.

Including this one, there were a total of five spots moving in the grasses. They advanced noiselessly, so well hidden that the herbivores standing a mere stone's throw away hadn’t caught wind of them.

The ever-vigilant middle head of the leader of the deer herd, the Three-headed Dicrocerus, turned its nose up and sniffed at the air. Its head snapped towards the lions, and as if by prior agreement, all other deers second heads followed.

Their sudden, unified scream rammed into Bloom’s brain like a twenty-ton punch. Almost made her slip from her seat. Her hands thrust out, tightly hugging the branch for her dear life. She hung there for a second, breathing hard and fast as her eyes shifted towards the forest floor below almost against her will. She ground her teeth.

For a good vantage point, she’d been sitting on one of the highest branches of one of the tallest trees around the grassland. And from up here, the ground was far.

I wanna pulverize those deers.

Calming her racing heart, she once again sat back up. Though this time she clutched on to a nearby offshoot of the branch. She turned her eyes back to the field, but the game had already begun.

The ground rumbled. Nearly a hundred hooves trampled swathes of verdant grass, flattening them as the herds gave it their all to outrun the lions. But those big cats kept pace easily. They stuck to the herd's flanks like chewing gum, keeping a tight rein on the direction they ran to. A few times they tried to divide the beasts, but those Skullbisons weren’t making it easy for them.

With 4 times the number, and bodies nearly twice their size, those beasts presented the lions with a challenge that more than made up for their lack of levels. They kept themselves between those predators and the deers, whose sharp senses had saved them time and again.

A younger bison stumbled, falling behind the group. One of the lionesses lunged forward. Its paws landed on the rump of the beast, sharp, hooklike claws sinking into its flesh. The bison brayed, dragging the lion forward as it tried to get back to its herd, but its speed and strength were clearly falling. Two other lions came to help their mate tackle the half caught prey.

Fascinated, Bloom kept her eyes fixed on the show. Other than fantasy, books on hunting and other wilderness related stories were among her favourites. But the chance to observe a live hunting scene, she could never have that outside.

Since they caught the first prey...

Suddenly the leader of the bison spun its head around. A deep moo escaped its throat, resonating through the air as its four horns glowed a bright red. A spark of crimson fire rose in front of its head, spinning as it grew to the size of a soccer ball in a flash. It hit the lioness attacking the younger bison on its side, blasting it into one of the other two lions. The flaming ball erupted, engulfing both of them.

Without so much as a pause, the rest once again continued their deadly game of run and chase. The two injured lions also shrugged off the fire like it was a minor nuisance. They joined the others, nevertheless, some effects of their injuries still remained. With the four-horned Skullbison taking the initiative, actively hurling balls of fire at them at every opportunity, the predators were in for a hard time now.

Why isn’t the grass burning? Bloom released a sigh. The hunt wasn’t going how she wanted it. This way, the lions might give up before anything actually—

“KREEEEEET!” The blaring call of the Three-headed Dicrocerus jolted her out of her thought. The beast, running at the forefront of the rest of the herd, turned sharply, making an abrupt change to the course the herd had taken until now.

Due to their smaller, more nimble bodies, the deers adapted to the change faster, but the bison weren’t so lucky.

Knowing danger was ahead, they also gave their best to follow their allies, but the size of their bodies betrayed them, not to mention the size of their herd. Including the Four-horned bison, only about a dozen bison at the forefront could follow the deers. The rest couldn't follow up. with the lions still chasing them, they had to keep heading in the same direction despite whatever danger may come.

But this sparked Bloom’s interest back up. “What could it be?”

A strong gust of wind blew past the grasslands, heading towards the forest, towards Bloom, bringing the answer to her. Her nose wrinkled. After travelling the distance to her, only a slight hint of it remained, but that musty, pungent smell... she’d smelt it before. It was the same kind of stench the Sleeping Tiger had. The Copper Bear too.

The stench of a predator!

Ahead of the nine bison separated from the herd, a patch of dark-green grass swayed. It rose from the ground like a miniature hill, and the bison skidded to a halt. They mooed and shifted back, trying to turn away, but the lions behind had already caught up. As they encircled those horned beasts, Bloom got a good look at that shadow towering before the bison. The patch of green grass, or rather, the fur on its body... only the Sleeping tiger had had a size comparable to the creature that stood up.

Ah! Bloom nodded. Of course, the lions have a boss too.

The Grasslion King’s grassy mane swayed in the wind, four rounded ears peeking out of them, with a thick layer of fur hanging from its body like a coat of green vines. The level 50 creature raised a palpable sense of dread into the herbivores as it stared them down with its emerald eyes.

Huddling together, they tried keeping away from the threat on both sides of them. Four faced the giant lion, the other five kept off before the approaching lionesses. They pointed those dangerously sharp horns at the predators and shook their heads, blowing plumes of crimson flame from their nostrils.

The giant Grasslion stood still as a statue, showing no intention to join the hunt actively, but the other five lionesses never let up. They stepped forward and backed out, the movement carrying a strange rhythm, like some sort of ritualistic dance, putting a lot of pressure on the bison. It wore them down both mentally and physically.

It should be over soon. Bloom turned her head towards the other, bigger part of the herd running towards the Dragonspire canyon.

Well, at least they got away.

A sharp, shrill screech. Like red hot nails scratching the inside of her skull, it left Bloom paralyzed for a moment. She grimaced, clamping her hands against her ears, and scowled at the sky above the canyon. Tiny shadows shot up from the depth of those rocky spires, too far to make out their shapes, as they hovered above the horizon for a brief second.

They zoomed forward like missiles, and for the first time, Bloom caught sight of her real goal.

Well, that was a fun chapter. So many new things for her to fight...

Too bad, she'll be fighting them offscreen... :(

I'll just show the end boss fight, cause others don't serve any purposes to advance the story, but that's why I drew the pictures...

Wanted to draw the lion too, but didn't have the time. So this part is the images of the prey, and for the next part, it'll be the predators...

Well, as usual, leave a comment, will you? I absolutely love 'em...

Visit my discord Ruins too, if you like peace and quiet. Since it's always so peaceful there due to the lack of members...