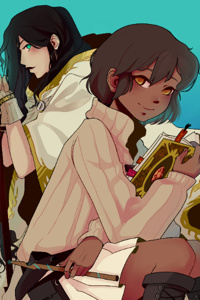 After years of beatings and neglect from her parents, 13-year old Frances was summoned with her entire class to the fantastical world of Durannon to fight the monsters invading the human kingdoms and defeat the "Demon King." If she succeeds, she might have the home she never had. But if she can't overcome the trauma and self-loathing inflicted on her by her abusive parents, Frances will die, and be summoned back to the home she escaped, on the day that she left.

However, with the help of her mentor, Edana, and some friends she makes along the way, Frances may be able to fight the Demon King and win, and maybe, just maybe, heal from her trauma.

worth 9 hours of your life

here is a little 5 star review

I really love this story, it made me feel the same way I felt when I was nine or ten, reading harry potter for the first time (and then subsequently getting the audiobooks to listen to on repeat at an extremely low volume in secret after having been put to bed.) this is a new nostalgia that I didn't expect to get in my twenties.

I only decided to read this because of all the other great reviews, and I'm glad that I did.

as someone who wants to one day try and write my own stories, this is something to aspire to. it's wonderful and heartbreaking, with amazing characters, thrilling battles, and a hint of something like romance on the horizon.

the grammar is close to flawless, my flow was never broken.

the style reminds me a little of some of the stories I read growing up that are maybe targeted towards girls a little more than boys. the emotional journey is just as important as the literal one, and both journeys serve to enhance the other rather than outshine.

I'm gonna go cringe in a corner at my review now

Review having read up to chapter 14

Overall the story and writing are good.  The beginning chapters were well done and easily caught and held my interest.

Style:  The perspective was consistent and clear.  If anything I would say that I felt like much more time had passed that what the actual story tells us is the case.

Grammar:  I didn't notice any flaws in the grammar, punctuation or word usage.  Overall the story was clearly written and read smoothly.

Story: As I mentioned above, the story starts out well.  However instead of exploring this exciting new world full of wonder and danger, it goes from conflict- the Frances choosing to take the more unpleasant path to avoid her schoolyard nemesis to an ongoing politically correct therapy session.  That Edona and all but one of her fellow teachers had no concept of child abuse or really abuse period increasingly breaks immersion as the story progresses.  That break in immersion makes it more noticeable that there is something off in the relationship between the mentor and mentee.  If the world is so simple that the head of an order and teacher can seemingly devote her time and energy on one troubled young student, did they really need to summon over a hundred kids to save their world?  There is no sense of threat or urgency.

The conflict becomes simply Frances learning to trust Edona and that's not what I felt like I was promised in the first chapter.  I hope this changes in the rewrite mentioned where Frances has more interactions with her classmates.

Characters:  Frances is a very likeable and relatable young woman.  I want to cheer her on as she deals with her issues while facing difficult challenges (and building her self confidence through her achievements)

Edona...  She's a lovely woman.  I just hope to never meet her.  She has no concept of abuse but knows that she should give Frances time respect her 'quirks' and that she should be the one to extend trust first.  She quickly gave me an lsd flashback to Councilor Troi whom I now wonder how I ever enjoyed as a character (had to have been the body suit).  Just my opinion but she needs to be distracted from the subtle hints, too busy to follow up when she notices, and maybe a flaw or three.

Wow, this was quite the journey to catch up on. It starts as the standard teleported to another world (as this is isekai) but instead of an individual, it's a large group of teenagers.

And from that premise... wow, I want to say this is not something that's for the faint of heart; it pulls no punches and there were a lot of points in the first arcs where I thought I was so emotionally moved because it struck a chord with me—having suffered from depression and low esteem early in my teenage years, but nothing like abuse MC suffers—which tug hard at my heart every chapter for the first few arcs.

But this isn't just a story of trauma—it's also healing. The healing is good. You could say the trauma MC suffers is a little exaggerated, but I think it has a good payoff.

Unlike a lot of isekai that you might read or watched, the teleported cast is well aware if they fail in their tasks, they are immediately sent home leaving behind the people they failed to protect, and that gives the characters(like MC) a reason to do their best, etc because they have a crappy life to return to.

So, moving on; I think the prose and such were solid. The grammar in the first ~4-5 arcs is good, sometimes it might be confusing figuring out who was talking since there was no "he said, she said, etc" but nothing too major. However, as I inched deeper to the 5th arc they started to pop up more but I'll admit I never been much to care about them as a reader—these can be easy oversights and the author will most likely rectify them when he self-publishes.

Moving on to characters: I like them, I feel like it's the strong part of the story. This is third person omnipotent, but it also gets limited sometimes. There's a considerable amount of characters with their own motives and their own history. Although a few act a bit caricature but they get more... humane later.

Overall, solid work. Can't wait for the wrapup of book 1, and the adventure in book 2.

A tear jerker as a broken, beaten and abused  girl finds what family and friends really mean in a fantasy world. This work of art is beautifully written unlike many stories of the same vgemre. You will watch the protagonist grow in a fast, and fluid pace while building a great character. The world is complex and full of life, and very well flushed out. This is a must read!

Reviewed at: Arc 1 Chapter 5: The Teacher Starts to Get Suspicious

This is only  my second review left on Royal Road, to be frank I don't really know what other people look for in these, so I'll just give my best impressions...

And they're damn good.  I've checked out a few Royal Road fictions and... not a lot stand out.  This one does, the characterization of Frances has her jumping to life, everything about her is consistently within the character laid out, right down to how she relates to new people, and vice versa.  I genuinely want to see how this character grows to come out of her shell and who she becomes later on.

Storywise... the tiniest criticism I might offer is that the characters seem to adapt surprisingly quickly to being dragged into another world... but frankly this is probably necessary just to get on with the story, so that was probably the right call to make.

The visualizations and metaphors are excellent... if I were to label ONE critique... well honestly some moments could be painted a bit more, but honestly that is more like my personal taste than anything negative.

I'm not very far into this story just yet, however, I have been very impressed so far, and I am not easily impressed by anything.  Definitely the best thing I've read on Royal Road so far.

Kudos to you author, write on!

Everything Alright My Student? Yes Master.

Title is what you get.  It's slice of life about a traumatized girl recovering in a fantasy world.  She has super magic and so does her mentor.  Short chapters.  It's an amateur version of Mercedes Lackey's Valdemar without the companions (or they haven't shown up yet).  The mentor makes a big deal mentally about her student's previously living situation.   Would have had higher suspense if the MC switched back and forth between the fantasy and real worlds.  Would have been more interesting if the author didn't tell us the thoughts of characters and tried harder to show.

It's a fluffy slice of life YA story and I couldn't get into it.  It is obvious that nothing further bad will happen to the MC.  If you want to a heart-warming 'healing' story, and don't care about an overshared omniscient viewpoint, go ahead and enjoy.