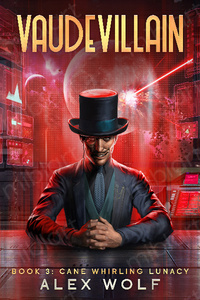 The beginning wasn't very good imo but the premise has enough potential for being amusing that I decided to reach 10 chapters. Which is barely enough for it to become more entertaining. (the beginning lacks amusement, I think the authors sense of Humor might just not fit mine well) now it isn't great but it is a decent read.

Edit:now that we are further I think the author doesn't want to write a zany story but a normal story with an Mc who likes playing a zany character. (Which the current character drama chapter seems to confirm. ) That doesn't work very well for me, though based on the rating it does for others. Of course there are many comedy series that mix comedy and serious subplots but as subplots go I don't find the main serious subplot, interpersonal trouble among mmo players, particularly interesting. It just detracts from the entertaining arcs for me. Anyway dropped my rating from 4 to 3.5

It's an elaborate dnd session

Reviewed at: 34 - Hanging Out, Making Plans

by tyes77 Monday, July 27, 2020 9:24:16 AM
If you are looking for a video game novel, this isn't it. If you are looking for a DnD session set in a hero setting then this is for you. Unfortunately I'm not one of those people.
The novels style is cringey with old humour and how the old timey villian is so cool. Somehow he ends up 'winning' due to others incompetence instead of his own competence. He doesn't care about score or anything, just having a fun time in the world. A video game world that I don't see how it isnt burnt to the ground with such basic NPCs.
DnD is what I compare this to because it cobbled together and things happen only because one of the players thought it would look cool. Plot or characters don't matter at all in this. Everything is done for the fun of it with no substance whatsoever and that is why I can't honestly give this a solid score.
Sorry but a story is something more than just a 'fart joke' or what alludes to old timey villian antics.
I don't mind others enjoying it mind you, I just don't figure there is anything like a story at all. Character development is obviously a foreign term.
Report

The definition of a Romp.

Reviewed at: 34 - Hanging Out, Making Plans

Overall, read it. This is a fun comedy with fun characters and low stakes.

Style: Vaudevillian has style. It's a story entirely about doing things in a certain way, and it succeeds. Dr. Zlo, great name by the way, sets out to be a cartoon villain, and by God, so far, he's succeeded.

Grammar: Mostly great, definitely readable. The main issue I've had is getting put into the action without knowing the context of what's going on.

Story: The story is extremely fun, and has made me laugh more than once. My issue is this, if you don't get a plot going, even a very basic one, you'll run into major problems down the road. A good rule of thumb is that a plot isn't what the characters want, it's what they need. Right now, everything is purely based on what Dr. Zlo, or Dylan, wants.

The reason this is so important is that without a plot, your characters will not grow. Without character growth, the entire story will stagnate into bland mediocrity. A story's value comes not from what its characters accomplished from page one to 'the end', but how they changed, the people they became. A heroic character becomes the best version of themselves, and a villainous character becomes the worst version.

Character: So far, everyone is working well together.

Final Analysis for a potential reader: Read this story, you won't regret it.

Final Words for the author: I always wanted to read this story, and I didn't know it till I saw it. I'm trying to think of the most encouraging, positive thing possible I can say to encourage you and help you succeed. Obviously, I've failed to put it succinctly, so I'll just leave you with the knowledge that I tried, and that's how I feel.

A Super Villain You Would Love To Be

Here to take over the world in style, Dr Zlo aka Dylan comes in living out a wild fantasy I would love to have in reality. With a fairly standard VR SciFi-Fantasy (I don't know which one) albeit with a slight twist the story has a very interesting setting that it builds on. But here's the thing.

No Elves or Dragons or Dwarves you suckas! (There might be later on, its possible) Dont run away just yet though, instead what this story has is a world of supers. Here you can model your powers and live out your wildest super power dreams. Now in comes Dr Zlo a super villain Mad Scientist full with his wacky minions team and a mission to take over the world.

You get to watch him as he starts off in the world wondering how this Role playing fan will pull off being a cool and collected super villain that has both grace and style.

With impossible ideas that we accepted in cartoons brought to reality, it is a wild ride and a thorough joy to read. Here you'll find giant teddy bears minions and other cool things that make you wanna dive into this world and live it yourself.

Ladies and gentlemen what we have here is a Doofenshmirtz done right and in a realistic setting [from Phineas and Ferb for those who didn't realize it and if you still dont know what I mean :) ] and he's no doof either. So you get to read through his exploits and world domination plans in action. Like seriously what else do you need!?

This like my Childhood fantasy that I didn't have come true. I didn't realize how much I needed this till I read it.

Points to read the Story.

A slightly slow start but it goes straight up from there. Give it at least a few chapters and you'll be HOOKED before you know it. I know I was.

The characters are flat, the conflicts and plot extremely 1-dimensional. And given that this is all taking place in a videogame, I don't feel like that is going to change anytime soon. So what's left to enjoy is Dr. Zlo's schemes, which are pretty much what you expect.

There is essentially no reason to care about what is going to happen, and the plot has already become repititive, alternating between tedious fetch-quests and tropey hero encounters. Overall it is fine? The writing is serviceable, sometimes clunky but clear, but I read about half of what there is so far and I'm not at all invested in the story to keep reading.

IT was good, but is starting to drag.

I enjoyed the first arc. It made a few strawmans against video game players, but nothing too agreggious. Some characters were paper thin, but most were at least cardboard.

but this latest arc is just boring me. I read a bit into the chapter and then just start skimming. there's nothing to keep me interested. since the annoucement the first book would be published, the quality has dropped.

so while you can, read the first book, up to the creation of menagerie. that's a pretty good place to stop. Once that's removed for publishing, make your own desicion from there.

It sure is a thing!

This late in the game, this story doesn't really need a review from me, but I thought I'd throw my 2 cents in anyway.

I'm not sure why I started reading this story when it first started popping up, but I'm glad I did.

The grammar is fine. I don't typically notice any overt grammar mistakes, and the prose and word choice has never struck me as out of place or cringey, in context.

Style is such an individual thing, but I enjoy the author's voice in the writing very much. I'm not super enthused about multi-POV stuff, but the characters are good enough that I don't mind it.

I love every single character. The overall characterization is probably the best thing about this fiction. Each one reads and feels like a well thought out invididual and it adds a lot of depth.

The story is just plain fun. The goal of the characters for the majority so far isn't even to "win" anything, it's to have fun, and it reflects in the overall writing.

If you're an on the fence type of reader, I say give it a shot. The worst that could happen is you move on. Otherwise you're in for a great time.

A fun novel to read

A MMORPG novel with a funny villain MC that doesn't really make you hate him even if you like hero MC's. The way the author portrait the MC makes it quite easy to relate too with character that doesn't have a 2 dimension personality

It's good, got nice characters, believable villains, and a game company that for once is not the best at absolutely everything. What more can I ask for?

Oh, and it's got super powers too I guess.

"Putting awesome quotes in your bio doesn't make you cool. Except when it does."

-Khalaenas, when speaking of Vaudevillians author.

This some top tier stuff