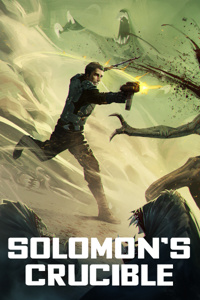 Book one is now available on Amazon!

On the day the System came to Earth, Solomon Gragg had to cut off his own hand. Then things got rough.

The arrival of the System disabled all modern technology in an instant. It exposed humanity to alien life forms for the first time. Society will never be the same after we discovered just how little we knew about the true inner workings of the universe.

Solomon just wants to kill all the invaders trying to take what’s his.

Reviewed at: 48. A Founding

Our protagonist loses an arm, which is compensated by big advantages in the game system thing.

Except he is somehow never inconvenienced by not having an arm. He starts out with a boar spear (2H weapon), and uses it together with a shield. Then does it while climbing a tree, and throwing bombs in-between swings. It's never indicated, but the only way I would be able to make sense of the fights is if he has a prehensile dick.

This story puts out chapters every day to try to purposefully game the RR system. Which isn't inherently bad by itself. If one can write that much, by all means, release daily. But you can tell in the writing that quality is being tossed out the window in exchange.

The chapters are very short, while also somehow simultaneously managing to be bloated with unnecessary detail. If you take every 5 chapters, remove the purposeless clutter and combine them, you might get ONE decent chapter. If you pick the right chapters.

This story would benefit immensely from focusing on basic good writing methods instead of worrying about pumping out a bland and pointless chapter every day.

Reviewed at: 50. The Party Forms

A masterclass in doing nothing. 50k words of story for 'book' one and we have seen a dungeon with a handful of fights and had a grand total of one day and one hour pass - 47 chapters in.

I'm sorry, but when you can look at an entire 20 chapter span of this and see a couple of fights and mostly filler I think you may have a problem. Props on keeping me reading without thinking about it for a couple weeks, but I'm thoroughly disappointed in myself for thinking something would change.

OK if you can suspend your disbelief

Reviewed at: 43. A Conclusion

Another addition to the system based genre, this time featuring a grid/point/skill tree levelling scheme. Nothing particularly remarkable about the writing style, either positively or negatively.

Plot wise, we get the sense that the protagonist is a steely, decisive figure, bent on surviving as he decided to chop off his hand in Ch 4. Although we see the loss of his hand addressed during the subsequent shop encounter, and through the healing mechanics of the system, the author appears to forget totally about the loss of the hand, especially during combat (even though he obtains a one-handed weapons skill).

Overall, a good semi-mindless read if you enjoy the endorphin rush of levelling up and fights, that gets better about 30 chapters in. If you find yourself having difficulty with suspension of disbelief during the combat, drop it and move on because that aspect fails to improve. For me, the latter is a damning weakness; 2/5.

No sense mixed with extreme let-down

The protagonist stars the story by losing his hand, which you'd think would inconvenience him sometimes, or that he'd complain, or.. something.. But none of that happens. He can still fight in melee range despite being at a very large disadvantage, even though he wasn't a fighter before the system. He started with a large lead, and is now wasting it, going door to door inviting people to join him in the forest, like a one-armed mormon. Every chapter is short, and the author could easily release 1 chapter per week, with them being longer and actually having some substance to them, but chooses to upload frequently, which, normally, would be awesome, but the chapters end before they begin, and fall flat, as nothing happens for real life days in a row, ending in disappointment nearly every time you see a new chapter. The grammar is well done, the characters could use a lot of work (they're passable as middle school work, but have no actual character, just a list of things that are already on display), and the pacing/chapter/page structure is horrific. It has some interesting ideas, but the protagonist went with the boring abilities, and we've not seen them put to use yet. I'll read it again in the future, but need to wait for at least 100 more chapters to come out, as that might last me a couple of hours.

Reviewed at: 38. A Confrontation

The story has an interesting premise and setting. It is the kind of story that is nice to binge on. Unfortunately there isn't much behind the characters or the world that keeps you coming back to the story with every chapter. That might be subjective or not ~~!

Why did i dropped. Good grammar

The idea is good  and the grammar is good. There are no other characters developed rigth now and everything evolves around the main MC.

It is just ridiculous.  Dropped.

Solomon’s Crucible walks a litRPG road less traveled by instituting the leveling system in our world, rather than having one or few character(s) transported into a world with a, or suddenly gained access to a videogame-like leveling system. This promising introduction gets some limelight in the first volume, but only deeper explored in the second volume, where Solomon travels to his hometown and sees how other people deal with the sudden imposition of and disruption by The System on their daily lives.

Speaking of, the system is a mix of prescritive and descriptive in that you gain experience and level by showing and proving proficiency (descriptive) in the relevant field, and thereby earning points that can be assigned to gain gradually more supernatural abilities (prescriptive). In other words, unless you get better at a task, you don’t actually level up that task and gain points from it. So no easy grinding by repeating repetitive and dull tasks ad nauseam until you hit the level cap.

Where Solomon’s Crucible falls short is engagement. While the situation is early on always dire, Solomon is alone in the wilderness and therefore without anyone to interact with. This isn’t necessarily bad, there are a great many man-vs-nature stories, but a lot of the reader’s time is spent in Solomon’s head, the couches there are made of wood, if you get my meaning. Later on Solomon does gain a comrade-in-arms and—possibly—friend, but too little time is spent on that part, in my opinion. The two interact by necessity and choice, but not by desire. A chapter or two where they don’t have to fight the next monster or similar and instead only interact with each other would have done wonders, in my opinion, in colouring the motivations of either/both for later events in the second volume.

Regarding grammar, spelling, and such there is no complaint. It’s not outstandingly pretty or such, but it does fit with my impression of Solomon’s blue-collar worker soul.

Hm… not to disparage blue-collar workers, this was only meant to point out how Solomon appears …uninspired and lacking in zest, though obviously not in his will to survive, what anyone who’s read the prologue (the tutorial to The System) can attest to.

theres hardly any story at all. its just about a guy that gains skills and gets upgrades. very boring. if your new to litrpg you might like it. but its more of the same. very average

You're not the first guy to wipe your ass

Reviewed at: 5. A Brief Journey

The system apocalypse has arrived and Earth is on a few hours of gracetimer. Now unlike most MCs in such a position our protagonist isn't getting an immediate advantage. He's not the first to kill a monster, he doesn't get a training time chamber in a dungeon, he doesn't even get a bonus for having to cripple himself to get out of a trap.

Meanwhile the grid based system seems to be a bit of a ripoff. The grace timer is incredibly short, and the protagonist needs to spend grid points to finish the tutorial and unlock basic system functions.

The story hasn't progressed much so far, but I'm pretty excited for this one. How will a hardass protagonist do who isn't immediately OP? How much of a hellscape will Earth actually become? What's the rest of humanity going to do?