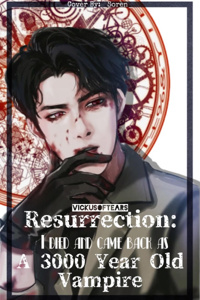 Resurrection: I died and came back as a 3000 year old vampire!

A young business man dies, and in the process of crossing over, his soul accidentally drifts where it doesn't belong. The new body he's acquired? A 3,000 year old vampire, charmingly named Vampir.
At least he's handsome. And rich.
What will he find in this new world as he seeks a cure for his vampirism? It's mostly one nightmare after another really, but political intrigue, beautiful princesses and delightful demon dogs might just help him find the freedom he is looking for.

A well written OP-MC vampire story. The style and humour make for an easy read that should be enjoyable for most kinds of readers. Flawless english and interesting characters keep you going and before you know it, it's suddenly 3am in the morning and you have no more chapters left. Definitely recommend

Style: The author's style seems to be well honed in a way that fits the story. It stays very consistant throughout, so I'm never distracted by a sudden style shift.

Grammar: Pretty much no glaring gramatical errors at all thorught the chapters I've read. Good Job!

Story: Fairly basic premise, but not boring. It's only the beginning so all I've got to read is a setup for the plot. There are no glaring issues like continutiy or anything that can plague the genre you write in so all great in this area.

Character: This is so far the weakest point for me. This is more of a personal reaction to the character. I dont connect with the MC specfifcally but with more character developement I'm sure that will change.

Overall great novel that will become even better as you write!

i love its soft humor

A Tale of Transmigration

Lord Vampir is a powerful vampire who kills mercilessly at will and sometimes for the sheer pleasure of it. However, by a stroke of luck or by some cosmic design, an average human being comes to inhabit this powerful being and all its deadly magicks. These include the ability to vaporise other beings instantly or accidentally, the ability to influence and at times, control other beings, and of course, the ability to transform into other forms.

Ron is Vampir's faithful sidekick and provides a wonderful dose of comic relief throughout the story. Ron's character is juxtaposed nicely against the deadly Lord Vampir and the interaction between the two is hilarious at times.

Enter a world of Dark Elves, Vampires, Fairies, Trolls and all manner of fantastical magical creature. I am at chapter 8 now and am interested to see the budding romance between Leyara and Vampir (hope they hit it off). The pace and plot is fast and the story involves Lord Vampir as the main character as he traverses this unpredictable fantasy world. The story is told in first person and the style is whimsical but intelligent. This story has lots of potential and definitely one to recommend to the readers!