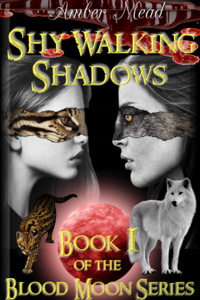 Kierra isn't your typical 'thin, fit, beautiful, and gentle' heroine. She's a big girl with a bitchy, brash attitude, and doesn't care what anyone else thinks. She isn't perfect and has no wish to be.

Faline is small, the softer side of the sibling coin, but no less tenacious. A carefree spirit who on many an occasion has to corral her sister before things get out of hand, she has a sharp mind colored in whimsy. A woman with a taste for life and becomes drunk with its possibilities.

A fated meeting with a mysterious yet handsome friend becomes Faline's personal hell when Vampire fangs are bared.
A chance encounter leaves Kierra fighting for her life when she's taken down by an insane Werewolf and left for dead.

The search for a lost sister has never been more perilous. A strange new supernatural world awaits them both as they meet fascinating new allies, make terrible enemies, and uncover hidden and buried secrets.
A Blood Moon is just over the horizon, and shy walking shadows won't stay shrouded forever.

Love the story and how dark it is.

But can't really read Falina POV. Not fun reading about constant sexual abuse and whatnot.

Well written story about feline vampires, and shifters, and weres. Very mature themes, and haunting characters, but the mature are taken seriously and not as some pornographic fetish. Even though terrible things are happening, the characters are strong women, full of hope and not succumbing to their lives being ripped apart. Enjoyed reading very much. Looking forward to more.

Reviewed at: Chapter 158 - Change Is Coming, Let's Cause Some Trouble

Aight, once in a blue moon review time. This review is mostly aimed at the author, but of course also to potential readers.

Shy Walking Shadows is a chunky 1.4k pages (I'll be talking about this at the end >;) ) book where you follow a pair of sisters that through tragic events get turned into a werewolf, and a vampire. And when I say tragic its with a big T. This book does NOT hold any punches. While the story is great and I highly recommend it to any and all fans of the Urban Fantasy genre I also feel I must give a cautionary warning as there are a lot of heavy themes present. Amongst them being gore and sexual assault. That out of the way, let's get into the nitty and the gritty.

Just gonna go ahead and apologize ahead of time, not gonna be a particularly organized review. ;)

The grammar and prose is fine for the most part. There are some messed up sentences and out of place words here and there, but not often enough to pull you out of your read. The prose is not particularly flowery, but instead pretty direct and in my mind it works well with this story.

The characters are well-rounded and are far from cop-outs for the most part, with some exceptions. The main casts main- & sidecharacters belong to the first group. One of the characters that were present quite a bit in the story and felt like a bit one-dimensional would have been Madaline (was that her name?) - the jelous vampiress, anyway. Felt like she was basically just there to be an asshole and take shit. Basically comedic relief and plot-device? I do however imagine that we might get to know more about her in the second book, and even if we don't I don't think it matters too much.

That said, everyone laughs- like A LOT. Is this meant to lift up the mood of the story due to have dark it is?

Now for the story itself. Let me tell you about the story! Oh yeah- if you care about spoilers you're gonna want to skipperoni this part and move to the moon for a bit.

I'll start from the beginning. Basically one of the two sisters, Faline the Feline, has been role-playing Vampires in an online game with some dude. What Faline doesn't know is that said dude is an actual psychotic stalker & yandere Vampire criminal that is being hunted by his own kind.

Nicolaus the Piece of Work Vampire and his pal- & lover extraordinaire Anthon-something approach the two sisters on their way back from a shopping trip to the mall. Kierra gets mauled but busts pal-& lover extraordinaires head in while Faline get kidnapped. At this point the story gets split in two.

First we follow Kierra who after having crawled home and passed out from blood-loos gets kidnapped by a pedo and rapist from her childhood that's been scouting them out for months now. As she later wakes up she basically kill em both and leave their house in cinders. She also meets a kid they kept in a cage there - Bastion. Kid's been through some shit.

How do I remove spoiler tags? xd

This introduces us to the heavy themes to come, though I must admit it feels a bit inadequate shorty, but I must also admit that I'm unsure what would measure up.

Next we follow Faline and the stuff that happens there... let's just leave it at that I've never felt as uncomfortable and/or queasy while reading before. A buncha stuff happens from there and we get to witness a heavy case of Stockholm Syndrome. That said it feels a bit unnatural given all the shit Faline has to go through and know of. I really want to know if Nicolaus working his fuzzy-memory Vampire mojo had something to do with it? If he didn't, you might want to take a look at that.

Now there's one thing that irks me with this story, and in my mind its a big part of whats holding this great story back from becoming amazing. It's also what makes it so that this story is a mastadontic one thousand and four hundred pages. Its two of those things that a lot of the stories on this site struggle with, but this one in particular. Those somethings are, frankly, repetition of information and unecessary scenes. I brought this up with the author once in the comments of Intermission 1 or 2.

You will very often repeat information that the readers already know. I understand wanting to show how other characters react to being given these pieces of information, as well as wanting to do justice by the horrible experiences the characters have gone through. But I trust you are already looking into this from our earlier conversation, because as a reader this had me skipping large swathes of text simply due to not wanting to re-read things that I already know, and reactions I can already predict. Also adds a lot of pages.

Next issue is that you are also deep-diving way too deep into certain scenes that don't end up adding much. I will illustrate what I mean with an example. In a certain scene Faline is interacting with the slaves at the brothel. A bunch of silly stuff happens and it shows them building their relationships up - and Patricia (I think that was it?) walks in. This isn't problematic in and of itself, what makes this problematic is that you take a whole chapter to show this. This could be shortened down to a few paragraphs where you don't go as far into detail about the event.  Besides that you have a lot of scenes where she's bonding with the slaves, the sheer amount of them gives enough justification for the bond she forms with them. You don't need entire chapters dedicated to it. While its wholesome, it doesn't actually move the plot forward. There are only two things in that chapter that moves the plot forward. 1. She's in the kitchen. 2. Patricia Ms. Vampire walks in.

This is not a one-off thing either. The end of the book suffer heavily from both of these issues and made me zone out as I was reading.

OVERALL
Basically you can sum it up to this; you need to go through your book and really look at what to cut out with a very critical eye. The story got a tight, great and compact plot with charming characters - but its hidden underneath a large and untrimmed hedge. If you end up having a hard time being your own gardener, I recommend hiring one. Get an editor. This work, in my eyes, have potential to get published if trimmed.

I'll give this an overall score of 5/5 because I believe in your work. Good luck.

Cheerios~ looking forward to you completing the second book. ;)

Reviewed at: Chapter 9 - Reborn Through Revenge

Um, wow. This story is dark. It's a more modern urban fantasy rather than mediaeval, but I could possibly put this under grimdark in its own way. There's abuse, and horrible people, and death- and it's all written very well and convincingly from the point of view of these characters.

They each have their own unique voice and it comes through in the first person narration.

Grammar is good, sometimes not 100% correct, but that's done on purpose to go with the story and how the characters are. The flow is good, the desciptions are great and sometimes terrible (in a good way).