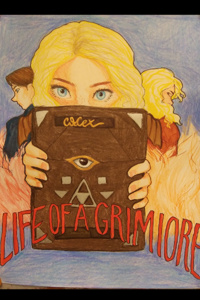 Short chapter today, sorry. I'll try to do another longer one very soon.

I'm not entirely sure what's going on.

I was quite certain that I lacked the ability to sleep. Yes, I had that vision of the Compendium and that was very worrying, but I thought it to be a mere exception, a chance occurrence that didn't affect how I actually operated. If nothing else, it simply doesn't make sense for a near-inanimate object to require rest. I don't move, I don't breathe, and I certainly don't talk (unfortunately). All I really do is manipulate mana, and it's almost never my own.

All of which to say, I'm extremely confused. One moment we were at the Bourgeious mansion, getting dinner and preparing to go to bed, and the next moment we're at Weatherton on the front gates. I can recall the previous day's events quite clearly still - I'm excited regarding the prospects of Athena's abilities in relation to telepathic communication, and somewhat disappointed about the absence of obedience in Lola's pet cavyrn.

As Lola enters the building, I'm surprised to notice Isaac following just behind. What's going on? Athena and Lola's familiar walk alongside us, seeming familiar with the school. Perhaps it's because they were summoned here?

Several minutes of walking later, we walk into the same room from approximately two days ago. All of Lola's classmates are waiting inside, in various stages of boredom, at least until Isaac enters. At the sight of him, they come to attention, eyes widening in surprise or shock. Well, most of them. The elf is still acting as though she's above everything else, although without any preliminary information regarding her species, she well could be and I would be none the wiser.

Wait, I missed out on some of the conversation! I really need to get my train of thought under control...

Carl is talking with an animated expression on his face, the frequent constant of unfiltered, unwavering arrogance hiding under admiration. His lion-creature is cleaning itself next to him, not sharing his enthusiasm. "Mister Bourgeious! My father speaks highly of you."

Isaac smiles at him, promptly lowering Carl further on my I-dislike-you list. Isaac never smiles at me. "Ah yes, young Carl. I recall you quite clearly, although I'm surprised you remember me."

The young duke has the decency to look sheepish. "I don't really remember you. Father has a picture of you and him from his college days on his desk. I know your face better than the art above my bed."

Carolin steps forward, the antler-headed boy I can't remember the name of hiding behind her and her six-winged snake coiled around her neck. "You're that really famous businessman, right? I heard that there's no one in all of Careolis who's better at dealing with curses than you."

Isaac nods agreeably. "Indeed. Not to pat myself on the back, but I daresay I know every curse there is, or at least I know how to find out about them. My library is immense. So what can you learn from that?"

The boy - Forrest, that was it! - squeaks from behind Carolin. "Knowledge is power?"

Hmmm... I may have to reconsider my opinion on this shy child. To understand the sheer breadth and depth of knowledge in its infinite variety is no small task, and to prioritize it over the dull bashing of fists and steel is not an easy one in a world of combat.

Isaac nods. "Indeed. It's critical to remember that the more you know about your opponents - in my case, a bad curse - the easier and better you can be at defeating it. This holds true for a school test, an important tournament, or even when fighting against monsters in a crawl. That last part will be quite relevant today, I assure you."

Really? I've been quite curious over how effectively Lola's magic and my spells operate in a genuine life-or-death scenario! This might be just what I've been waiting for!

...Of course, being adults and teachers, I doubt that we'll be doing much of the actual work. Given the wealth and power of the families these children are likely related to, it's a fair case that the teachers will minimize any chances of a real threat to the childrens' lives, which is of course ridiculous. If they're going to be in a situation where they might die and they don't have previous experience, it's probable that they will... expire, to put it lightly. Not that anyone is listening, of course.

Fighting my initial urge to verbally bash the universe over the proverbial head, I consider his words. If there was a chance Lola would be about to die, would I feel so protective as to remove that valuable growing experience from her life?

While tempting, the value of knowing your ability in a genuine battle is simply priceless. This might well determine whether Lola can become the Magelord, or if she'll have to inherit Isaac's business, or at least teach at Weatherton in her later age. If nothing else, she could teach others how to escalate their pools to the size of her own.

Oh, good grief, I keep running off on rabbit trails. I didn't even notice Barkley come in.

"That's right, students. We'll be taking a trip to the crawl underneath Weatherton, where you'll gain experience in both meanings of the word. You won't have to gear up too much, however. It's not a very difficult crawl, but it'll give you a feel for what it's like to really fight for your life. Rest assured that you will be completely safe during the exercise - Mr. Bourgeois here will personally assist you in the endeavor."

I feel like Isaac had something to do with setting this whole thing up, but I can't imagine what reason he would have for doing so. Perhaps as a more effective method of determining his daughter's true potential? He seems a little too protective to come up with that idea, but I've been wrong before. Rarely.

His voice cuts off abruptly, and I narrow my eye. What was he about to say? It's not often I hear his voice in anything approaching a panic, but he sounded very worried.

What do we have to be worried about? It's not a rhetorical question in my mind. I have no doubt that Isaac is more than competent, based on the reactions of the children upon hearing he would be guarding them. What concerns me is that the universe, who has absolute knowledge of all the workings of the world, is worried. The only existence that I can definitively identify as a threat is the Compendium, but that's far underground and shouldn't appear for some time, with any luck.

Did he say the crawl was under the school?