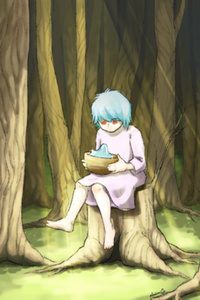 A young girl of 16 years dies by drowning, and is reincarnated as a living Puddle of Water.
Through many fantastical fun filled and wacky adventures our Protagonist will lead a better life than her last.
Thank you for your time.

Something I want to add, is that this story is written in first person, and I plan to carry on with it for a LONG time.-(Maybe thousands of chapters in size, until the story literally runs out of any potential to keep going.) So yes, there's still a lot of mystery and build up I have planned for future adventures. Wet World Wonderland is a story primarily concerned with the depth and complexity of its world and characters. So forgive me if something seems off, or isn't made immediately clear. I would love to talk, but try and consider that I might have something planned.
(Not that you can't still criticize, of course. If you've got an opinion on something, I'd love to hear it.)

If you plan on rating WWW, please read until chapter 20. WWW isn't the kind of story you can start judging from the first five chapters. Although, I admit I'm not so sure if 20 chapters in is good enough to judge it either, but I would still advise reading to at least that point. Also, if you have a problem with something in the story, please PM me, and I would love to talk about it.

As of 1/19/2021 I have just added WWW's (Wet World Wonderland's) New Cover-Art. I know it's a bit weird, and probably sudden. And with all things considered, it may never make sense. But canonically with lore and ino that has, or will be revealed in coming chapters, you might be able to put something together. Anyways, I hope you like it. Also, new symbol, at the top left of the image, hope you all like that too. (I know it's not perfect, but I really hope you all like it. Thanks for reading.)

Reviewed at: Chapter 22: “But enough of that, let’s get started.”

I'm basically the only one commenting at this point so maybe a review can give the story a little boost? I obviously recommend. The writing is sometimes messy but the characters are pretty fun and the story is cool. I especially like the wide variety of secondary characters.

Don't hesitate to try it and eventually make comments so I ain't alone anymore!

First problem: Where are the "Grimdark" and "Tragedy" tags (EDIT: "Grimdark" is there now)? Not nice of the author to hide this. Murder and tragedy appear after the first few chapters.

Second problem: The MC acts against their self-interest of survival. She (if a gender can be applied to a magic puddle) does it in a way that I find completely unrealistic given her circumstances at the time, it totally broke immersion for me. For no reason at all, under no pressure at all, and after a traumatizing incident threatening her life and freedom (so with certain experiences) she goes ahead and acts in a way that shows zero learning and gullibility.

Not even in a raltively safe modern Earth country would you, as a weak helpless thing that has no pressure and reason to do so and after just having had experienced something really bad, would you do something like that. Okaqy, it's har dto relate to an earth example because here, as a human, youc annot be alone without shelter and food for too long. The MC however at the time of making the decision I'm refering to had no such pressures, she was in her element, no threats, no shortage of easy to obtain food. No reason to take a huge risk, especially after just having had a really bad experience.

After barely escaping a murderer (and actual murder) - as a puddle of water mana monster creature, using all the author's plot device miracle powers - the first thing she does is contact the next random people out in the middle of nowhere she finds and lets them catch her and take her away. She was safe n her element, a river, and was ab le to move undetected and to easily feed on fish (thatalso could not detect her, being "magic water" hidden in normal water),

The writing is okay and I did not proceed from there. I also had issues with the, let's call it "split personality", although that by itself would not have been a deal braker for me.

Writing style is simple sentences. Example - quoting a paragraph (first sentence of the previous one included, it's strange):

We arrived at what seems to be a Kingdom. (How do you see something is a "kingdom"?)
...

As we walk around, I notice that there are a lot of Red Banners being set up, no Symbols on them, just Red Banners. The People setting them up are decked in red colored Armor. The only coordination really is the red colorings. Even the Older Children are gearing up in shades of bright red. Everyone seems excited.

The whole scenario and style is a little too rose colored (naive?) for my taste.

Just wanna be the first to rate!

Reviewed at: Here we are again, alone.

Yeah, not too much written so far, so there's not much I can rate it on. It is readable however, and I enjoy it, which is more than some can say.