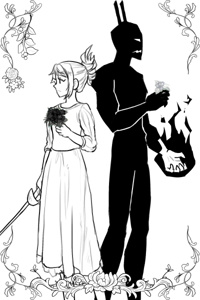 The old guard is now threatened by older evils.

Without their legendary king to guide them, an ancient way of life and honor is put to the test.

What starts with a string of unexplained murders in the fairy lands, steadily develops into the greatest crisis Western Civilization has ever encountered.

Not the dragons and their ilk, not The Trenchlings that gnash in their holes, not even the great empire of Ulteria that holds the power of gunpowder and electricity.

This is the oldest, most consolidated structure of evil the omniverse has ever known. Hiding between silent nightmares and the deepest crevices of the human psyche, necromancers, vampires, demons, and all manners of undead hold covenent with this one, ultimate predator upon humanity's hope: The Night God.

The West is strong, held up by the remaining bastion of their immaculately-powerful witch knights, but when their sworn nemisis and a beloved traitor are the ones that uncover the great masquerade, will they trust them, or will they doom the planet by holding fast to what they know?

Magical power beyond all comprehension is what they're up against, that is of no doubt.

The question of the hour is this: can old knights of a dead kingdom stand up once more to put the dark back in its place?

The Courts Divided is a massive fantasy project containing humor, horror, and some of the strangest forms of magic known to man or arcanite alike.