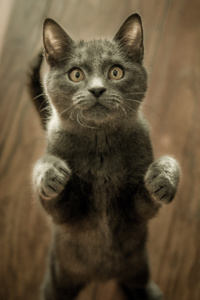 Chapter 0 Self proclaimed friend of Mine

''Hi there, my name is Bob, and living with a talking cat in America.'' Said Bob.

''Hey who told you to say that, I'm the narrator here cat.'' Said Bob.

''Who chose you to be the narrator you stick.'' Said Bob(Cat).

''Get out of my head you turf.'' Said Bob kicking the cat away as the cat fight's back.

[''IN New York city the new cities building's created by constructor workers for 20 years, living in the new buildings on the 26 floor of the apartment, and the views of the city drive though, just a normal daily life of a harmless weirdo.'']

''Hey if you're still here check out his boxers.'' Said Bob(Cat) holding a camera.

''This is my view, my useless master eating chips, and drink sodas.'' Said Bob(Cat).

Bio: I write for free and do this to express myself.
If your thinking this is for money, then your wrong.
I'm Just your average newb.