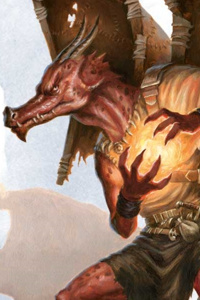 Though I had the scroll open, it took me a minute before I actually started to try and read it. My heart was racing and I could feel the adrenaline surging through my body from that whole ordeal. Once I calmed down enough, I paid attention to the scroll. As expected, I couldn’t read it. It’s probably written in the language I use in my chants.

When I looked at the scroll again, I could see the letters changing, but not to anything readable. I felt dizzy and those letters weren’t helping. I put down the scroll and went to the next chamber to get some water. When I sat down again, I felt extremely tired. Maybe the night was just a bit too much. A day’s rest would do me good.

After some sleep, I woke up to the sounds of rocks falling. It was our alarm system. Everyone had heard it and had woken up. We grabbed our weapons and stood at the ready. It was dead silent for what seemed like ages. I could hear my own heartbeat. The sound of it making the situation worse than it already was. Then, we heard a scream. It sounded like it was from a man with a deep voice. It came from the tunnel that led to a shrub close to the tavern.

Sklarsklaricin inched his way to that tunnel and went through it. Once he was halfway through it, he saw the Dwarf’s face, covered by wasps. Our trap had worked. He had destroyed their nest by accident and was now struggling to get out as they attacked him with the fury of a thousand suns.

He eventually made it out, probably with some help from his friends. But, by that time we had already gathered what we could and left through one of the other tunnels. We took our comrade with us as well. That’s when I saw his condition had gotten worse. It was terrible to look at, but also surprising he was still alive. Whoever he was, he must be as tough as steel.

We hid in the forest, near the edge separating it from the grasslands the village was on.

“Those scrolls you guys risked your lives for. Will they help him?”, Sklarsklaricin asked.

“Not just their lives, but our hideout and nearly our lives as well!”, Turalisjtilsin added.

“Oh, by the Kurtulmak, you have to be joking!”, Turalisjtilsin protested.

“Surely you would’ve known you weren’t going to be able to read it? So why did you even get it?”, Sklarsklaricin said annoyed.

“So much for that big brain of yours!”, Turalisjtilsin added.

“Suuuure. Can’t wait to hear this”, Turalisjtilsin said as he sat down in front of a tree.

“As I was trying to say”, I started, “I can’t read it, but I have a spell that should allow me to read it”.

“Great! You risked everything in the hopes that your spell would work!”, Turalisjtilsin complained.

“Your childish complaining won’t get us anywhere either, Turalis”, Vyth retorted.

“It’s because I only learned it when that wizard used it on him”, I said while pointing to our comrade.

“What did it do?”, Sklarskalricin asked.

“It allowed her to speak our language, so I’m thinking that it also allows the user to understand and even read that language”.

“Alright then, use it!”, Turalisjtilsin piped up.

I grabbed one of the scrolls, fully concentrated on my magic, as I chanted the incantation. I could feel my magic being called on by it, and then faltering. The dizziness returned. I felt weak and tired. I nearly fell down, but Vyth grabbed me just in time and sat me down.

“Are you okay?”, Rekiwr asked worriedly.

“That happened last time as well, didn’t it?”, Vyth asked.

“Yeah. I thought it was because I was tired, but now it’s clear it’s the spell”.

“You learned it from the wizard, right? What if you didn’t learn it correctly?”, Sklarsklaricin proposed.

“Then my magic shouldn’t even be effected, right?”.

“I think it’s best that you rest for a bit”, Vyth said, “We should also bring back our comrade to the chief. You’ve learned more magic, so I think we can return now”.

We went back to the nest. Upon our return all eyes were on us. And on our comrade we were carrying. As we walked to the chief’s office, we heard a female voice yell: “Sgos!”.

A woman ran up to us and took a hold of our comrade. She cried as she held him.

“What happened to him?”, she asked.

Vyth looked away and my eyes were locked to the ground. It was hard to say anything. Vyth eventually gathered the strength to speak.

“We… found him. He was held captive by those humans with weapons… and tortured…”, he explained.

Her eyes widened to an expression of horror. Then, the tears began streaming out like a waterfall.

“He’s still alive”, I added, hoping to improve the situation. but I’m not even sure if she heard me over her own crying.

The chief had joined us now. He looked at our comrade and grabbed my shoulder.

“I want you to explain everything to me”, he said sternly.

He looked at the scene before him for a bit longer, his grip on me weakening, before he went back to his office. I followed him.