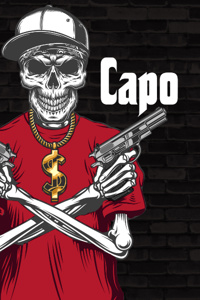 So I've finished writing the final chapter of book 1 of Capo. (It's chapter 59, not this one!)

The book will be going to an editor sometime in July, and I expect to start writing book 2 in the next few days after I get the outline solidified. I think you'll like how the arc ends and the hook for book 2.

"Whoa, Bro, you sure?" Manny said, not bothering to lower his voice. Smokey had been opening his mouth, but paused when Manny addressed me.

I wasn't, not entirely. The place was a gaudy palace that had been turned into a sty. Who knew how long it'd been like this? But the opulence of the top floor and the secure door sold me.

"That depends on Smokey. I'm willing to come in as your house mate, but I need some answers first."

"The guy that was living here, why do you say he's not coming back? Is he dead?" I asked.

Looking at the ransacked belongings, I expected he very much hoped that was true. If his former house mate came back, it might go badly for Smokey.

"And what about you, Smokey?" I asked. "If I come in with you, how can I be sure you're going to hold up your share of everything? Not just money, but keeping up with chores and just being a good house mate? That kitchen is nasty."

"Hey, I'm sorry about that. It's been a busy weekend, you know how that goes. I didn't have time to clean anything."

That one smelled like a lie to me. That wasn't one weekend's worth of filth down there.

He smiled broadly, exposing perfectly straight, heavily-yellowed teeth. "That you don't have to worry about! My parents are rich and my trust fund can cover everything. I just don't want to leave this top floor empty, it seems like a waste of a nice space!"

I turned to Manny, but he just shrugged. It seemed he didn't know Smokey that well, after all. If he really was a rich kid slumming it, then him covering his share didn't seem like much of a worry.

"What about parties? Is this place going to be full of people every weekend?"

"Definitely not! When I invite people over, I am going for an intimate gathering. Gloria and some of her friends, perhaps. Never more than ten people. You'd be more than welcome to join, some of Gloria's friends are quite attractive. They're mostly around your age too."

I left that one alone. If this dude was partying with high school girls, that was on him. It wasn't my job to be the morality police. Worst case, I'd have a locked steel door between myself and the chaos. Best case, maybe Smokey actually threw good parties. As long as he didn't throw them all the time, I'd be fine.

Smokey waved his left hand like the difference was inconsequential. "As you say. You in, Mack?"

"That's fantastic! I'll need the money before you move in, though," he said, looking a bit nervous as he said it.

I didn't have it, but he didn't need to know that. "I haven't got that much cash on me. I'll give you half now, and the rest tomorrow."

He hummed and hawed, but when I pulled my roll out and started to peel off bills he couldn't take his eyes off the cash in my hands. I stopped when I had $450 in hand and held it up to him.

"Sure, that works," he said, and took the money from my hand. He pulled it close to his chest and held it there, and I got the impression he was suddenly eager to leave.

"I'll need the house keys and the key to that door, there," I said, pointing at the steel door at the top of the stairs.

"House keys are no problem, but I don't have a key to the door. You'll need a locksmith to re-key it," he said.

"Okay," I said, accepting that.

"I'll get you your keys, back in a moment," Smokey said and dashed downstairs.

"It's better than the Highway Star. I think it'll be really nice with a little work."

"Still, Smokey's a fucking pig, Bro. You want that guy living with you?"

"I'm sure it'll be fine. He seems like a pretty flexible guy," I said.

I really meant that Smokey seemed like a weak guy, and if it came down to it I could probably make him do what I wanted.

Smokey came back up the stairs and handed me a couple of keys on a ring.

"There ya go. I'll let you get settled in. Good to see you, Manny," Smokey said, and left us again.

We returned to the Crown Vic and unloaded my bike. I thought about bringing it into the house, but I didn't want to bitch about how dirty the place was and then make it worse my first day. Instead I made my way into the backyard—dead like the front—and locked it to the metal railing on the back stairs.

Manny insisted on taking me to a nearby hardware store, where I bought a thick padlock and a door wedge. Until I could re-key that lock I wouldn't trust it.

It was starting to get late, so we said our farewells and I stood on the sidewalk and watched Manny drive off in the Crown Vic. It had been a long day, and I was feeling it.

I re-entered the house and locked the door behind me. The living room was empty, the lights still on and that faint smell of vinegar still hanging in the air. With how nasty the house was, I really wondered what he'd been using vinegar for.

I wandered into the kitchen, stepping carefully. My shoes alternately stuck to the floor and slipped, depending on what spill I trod in. One section of the kitchen island was covered in paper—opened envelopes and junk mail. I idly looked through it.

At the top of the stack was a power bill, with 'PAST DUE' written in red letters written across the top. I started to dig through the rest of the stack when I heard a quiet sound and looked up.

"Hi," Gloria said, leaning against the wall nearest the stairwell.

She moved silently across the kitchen, stopping just within arm's reach. She looked up at me, and her eyes were—for lack of a better description—fuzzy. Like she was drunk, or high, perhaps.

Gloria reached out with her left hand and stroked my arm lightly with a fingertip. The hair all over my body stood up at attention, as did at least one other bit. She could see her effect on me and smiled wider, stepping toward me. My right arm went around her waist all by itself and pulled her to me, the soft curves of her body felt wonderful squished against me.

"Smokey is passed out," she whispered.

She tilted her face upward and I kissed her deeply. At the same time she grabbed my dick with her right hand and squeezed gently. I moaned in appreciation.

She pulled back from the kiss, but kept stroking my dick through my jeans. Her beautiful, blue eyes looked up into mine, entrancing me.

There was a thunderous mental crash as my porno-train derailed. I pulled back, pushing her hand off my dick and then her away from me.

"Twenty bucks then. A special discount for you, handsome. I'll suck that dick real good," she said.

"Sorry, no," I said, backing away further.

She frowned. "What, are you gay? You want my ass instead? Maybe we can work something out, sweetie."

This was really going places I hadn't expected. What had I been expecting on my first night in my new shared living situation? It sure wasn't price negotiation with my house mate's girlfriend.

"Fuck you! Fucking Smokey passes out before he fucks me and I can't get any even from a guy my own age. What a shit night," she said, and I saw tears start in her eyes.

A part of me was just about to volunteer that I would be happy to fuck her, I just wouldn't pay her for it. Despite the lack of blood in my brain, I resisted and instead rapidly retreated upstairs. Fucking my new house mate's girlfriend on the first night I was there probably wouldn't have been the best start to our new relationship.

I closed the steel door behind me and wedged it shut. The bed took a few minutes to put back in order. The bedding, while smelling musty, was otherwise clean. With that sorted I took a long, luxurious shower in gloriously hot water and collapsed into my enormous bed for a dream-filled night of sleep.