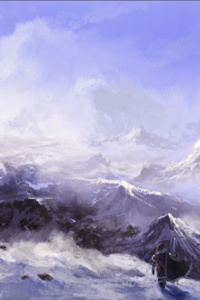 Sorcerer of the City

As a child, Rania was taught to live by the basic laws of our kind: to respect Nature as our own, to protect the life within Nature, and to control one’s emotional passions. A passionate elf was considered a liability and one who had not meditated, reflected, or allowed Nature to truly engulf one’s self. An elf was to set themselves apart from all other species and should appear as a lake – calm, unmoving, and flexible.

Rania’s mother told her that she had fire within her, strong and fierce and nearly impossible to tame. She recognized the exasperation within the statement and even as a young girl, she was aware of how less adept she was in reigning in her emotions. When other students provoked her, teasing her into a reaction, she often found herself dashing into the forest as a child, sobbing against the trees as if they were her true kin. Compared to the other elven children in the mountains, she spent far more time clinging to the trees than she did he true parents, who seemed more distant than the unmoving bark of a birch or oak tree.

Her father, the head of the council in the village, often reminded Rania of a large rockface – stiff and unmoving. He was, by her definition, the very opposite of the flexible, pliable water that one often aspired to be in their training. Her mother, in contrast, reminded her of the leaves upon the trees. Soft, light, and willing to go where the wind took her. As a result, she often followed what the council and her husband dictated. Even so, she was far more available to comfort Rania than anyone else. When several hours would pass in the midst of a particularly emotional day, Rania’s mother would find her curled in the roots of a tree, her head resting on the moss growing upon its bark after she had spent herself crying.

“These trees have been standing here for thousands of years,” Rania’s mother told her once, reaching up to rest a hand on the aging trunk of the tree. As Rania had turned from her hunched position against the tree, I looked at her to see sun spilling out from the leaves above in a graceful arc, making her mother’s face look bright and even more beautiful. “They have heard the woes and joys of our people, protecting the village, and embracing us with their loving touch. These trees are our livelihood and our family. The comfort you feel from them is quite real, Rania. There is something powerful within the roots of these trees.” She lowered her hand and smiled at her daughter. “Never forget that or else you may lose sight of your path.”

Her mother was full of these insightful comments and while they helped to ease Rania’s heart and the subsequent guilt from expressing some strong emotions, they left her feeling a bit empty at the end of the day. Rather than being in control of her emotions, she found that when she tried to apply the principles her father and people trained by, she scooped all emotions out so that she was as hollow as a cavern, an echoing emptiness that seemed to resonate far loudly than any self-control.

When she became older, it was easier to mask the emotions. She never became gifted at controlling her reactions of emotions as her parents or many of her people did, but as long as it appeared as so, she was able to continue in her daily life without being scolded by either her father or instructors. It had seemed easy at first, though when the pressure became too overwhelming and they threatened to explode, she would often smile and step out into the forest to rage and sob, collapsing against the mossy floor, praying to the gods that eventually she would learn to meditate, to release control upon herself, and to be one with Nature as her people had taught.

Even at those times, her mother seemed to sense her unfurling emotions and while she no longer gave advice or interesting one-line advice pieces, she would stand silently next to her as she lied in the moss, her dress bunched around her, her ear pressed to the forest floor.

“Am I deficient in some manner?” Rania whispered to her once, watching as an insect fluttered past, glittering in the sunlight briefly and then disappearing from sight. For a long moment, her mother said nothing. She smiled slightly, not expecting an answer, and then sat up from her slumped position over a tree root, lowering her eyes to the long, white blonde hair that fell over her shoulder. Brows furrowing, she reaching up and smoother her hair out absent-mindedly. “As an elf, we are expected to master meditation, to become one and be dominant over our base instincts. It is how our people live and how we become proficient in our skills. I always seem to fail at it and neither you, nor father ever help me or tell me how to fix it.”

“You are not that different,” her mother said after a moment of silence. The statement surprised her, but when Rania looked to her mother, she did not meet her gaze, staring ahead of her as if lost in thought. “Your father struggles with this, as well.” She turned  then to look at her and knelt down, tucking her hair behind her pointed ears. “He keeps his distance as he does not want to ruin your progress with his own troubles. He understands it well, my daughter, and he is pleased with how well you are doing. He was never able to get as far as you. Meditation and emptying one of their thoughts and initial instincts...it is not easy, but it is how we live.”

It was the most Rania had ever heard about her father and when she was home that night, she found herself contemplating him in a new light. She had always yearned for her father’s approval to know that he was in some way proud of her lifted the weight that life seemed to have placed upon her.

Shortly after this conversation, however, was when disaster struck Rania’s village.

She was stirred from sleep by her father shaking her awake, calling out to her. Jolting awake, she found his amber eyes in the dark that were wide with what she recognized as fear. Upon seeing her awake, he shoved her bow, quiver, and gauntlet in her arms, surprising her. “Get dressed, get armed, and hurry and take cover in the forest.”

“Do as I say!” he snapped, interrupting her baffled question. In the background, she heard shouts and they both froze, their ears straining to hear what the voices were saying. His face setting into a resolute expression, he continued briskly, “Your mother and I have to stay here to help the village. We will meet up with you in the forest. You must get to safe. We will find you.”

Uneasy by the sounds of chaos from outside, Rania dressed hastily in her tunic and breeches, gathered her long hair up with a leather thong, and listened to her father’s fast, retreating footsteps through the home. Hearing a sudden roar of something that was neither elven nor forest creature that she had heard, she stilled, her heart beat quickening with sudden dread. What is that? There are no creature dens near our village...

The ground trembled beneath her and she scrambled to gain her footing as she vibrations shook her knees in their sockets. She shoved her feet in her leather boots and then strapped her gauntlets on, snatching her bow and quiver where they lied on the bed and dashing from the room. As another tremor ran through the earth, she caught herself against a table, listening to the sound of rock crumbling and glass somewhere nearby.

Once the vibrations had subsided again, she hurried out of the home and sucked in a quick, horrified breath upon seeing the destruction that was being wrought upon the village. Traditionally, elven village homes were built within the wide trees and many had been smashed into, trees uprooted and turned into splinters. The quakes, she had gathered, were from the hulking, obscene trolls that were pulling out the trees and trudging through the village.

A sudden constriction around her heart caused Rania to grip at her chest as she looked at the ancient, crippled trees lying broken and dead on the ground. She felt nauseated, as though feeling Nature crying out in pain from being so violently massacred.

She heard a roar from one of the trolls as a fair of elves conjured fire and blasted it at it. The ground shook as his great fist came crashing to the ground, sending the elves flying into the air and hitting the ground some feet away from his landing mark.

To the side, she saw younger elves fleeing into the forest, likely commanded by their elders as Rania had been. She made to follow them and then paused, hearing another roar from the troll. Hesitating at the entrance to the forest, Rania looked back. She could just make out her parents fighting together, their faces gleaming in the fire and the light of the magic being cast towards the trolls. She closed her eyes briefly, emotions warring with common sense. She sent a prayer to the gods, hoping for their safety, and fled into the forest. She was not fully trained for combat and would only get in the way. She could only trust her father’s words and that they would find her in the forest.

She waited for several days, far longer than any of the other young elves, but not one of the elders had returned from the village. Some of the elves dispersed to other villages while others continued on to the higher cities in the mountains further north, not feeling safe in the villages.

Rania did not follow the other elves. When her parents never returned, she unfurled herself from the roots of a tree, bade it goodbye, and moved south – out of the elven domain.

Bio: Open to review swaps, chapter-for-chapter, just let me know in a PM or your review :)

Strong opening! Lots of promise. I'm a newer writer so i will tell you how it makes me feel.
The mc is the most ogranic feeling character. However the villagers i fealt were kinda used as plot movers not characters.

That's a good point! I will make them feel less like NPCs and more natural in the rewrite - thank you!