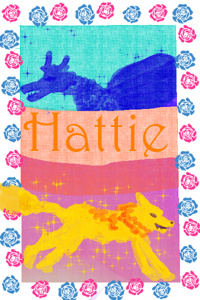 After scrubbing the Duke of Derrington's floors for fifty odd years, old maid Hattie decides to nose her way into an adventure or two to make up for her lost youth.

You're never too old to start something new!

Updates Wednesdays and Sundays, chapters are a minimum of 1000 words.

SomethingNew is a very good storyteller and writer. This story is NOT about you stereotypical "Old Maid". Hattie is a character that has very good depth to her, the support characters are very good, also. Especially Monte Hattie's gold wolf companion. The style is very good, it is a good, slow, even build-up. Some grammar and misspellings but not totally jarring or annoying.

a joy to read

I read this while going through an especially busy and pressuring week. Reading this story worked like a balm to that. It transported me to a lighter and happier place, and was a great comfort to read.

It follows a creatively written main character. Story has an interesting premise, and continues with unexpected turns. Style that is written is lovely, with moments of inspiring descriptions and relatively fast paced. Grammar was great, I didn't see anything problematic except for one small typo once.

The author’s style really evokes the feeling of dealing with a little old lady. It starts off slow and gets distracted occasionally, but eventually gets somewhere. It’s a very relaxing read, and easy to forget how little progress is actually occurring in the story as you get caught up in the beautiful slice of life. There is a lot of dialogue, though most of it feels mundane and some of it is stilted, which might be intentional to create the grandmotherly atmosphere.

There were a few typos, but nothing that interferes with understanding what’s going on.

The story has flowed nicely from one scene to the next. However, it feels very whimsical. I am unable to get an idea of where the story is headed, though there are a few interesting bits of worldbuilding and character development that I’d like to know more about. There’s definitely multiple avenues to explore, but I have no clue what the end of the story could be.

The part of the novel that makes me the most uncomfortable is that the (presumed) main character, Hattie, is keeping secrets from the readers. I can’t get inside her head because I’m missing critical information, or at least what I assume to be critical information. I don’t know whether the author will be pulling macguffins from the bundle of question marks that follows her around.

On the other hand, Hattie is also an older character, so it makes sense if they have a lot of history that will take time to reveal. I also might be biased towards characters that I know everything about though, so I’m willing to give the author the benefit of the doubt.

On the positive side, there are a plethora of characters to meet and they are all believable residents of the world that is being presented, even if most are one-dimensional for now. I am very interested in learning more about the second major character that was introduced, possibly more than I am interested in Hattie.

I’m happy to come along for the ride with Hattie, but I have no clue where we’re going or whether I should be excited, scared, or ready to laugh out loud.

A story that is different from the rest

Hattie tells the story of well Hattie, an old maid who realizes that she spent her entire time working instead of living. So she goes out into the big world so she can use her remaining time to live a life she had denied herself. And of course, that involves becoming an adventurer.  There is some charm about the entire situation and the idea of having missed out on life for whatever reasons does hit home. It is not difficult to sympathize with Hattie's plight. Though just like Hattie cannot breeze from place to place, the pacing so far is slow.

Hattie herself is well-developed with many quirks and depths. She has shown herself to be quite crafty and can keep up with the youth in her own way. The rest of the cast though isn't nearly as developed.

While for the most part, the grammar is fine, there is a tendency for fragmented sentences to crop up from time to time, and those can disrupt the flow of the story quite a bit.

The style of Hattie is truly unique and resembles a picture-esque children's fairy tale. There is a sense of otherworldliness for a lack of a better word going on. Though there's a problem that all too often one is told what people feel and that events often are summarized instead of being played out.

Hattie is different from most other stories here. Anyone who wants to read something unique should give this story a try.