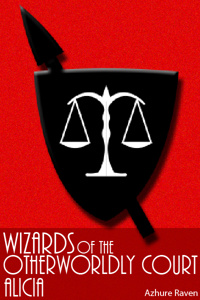 Wizards of the Otherworldly Court: Alicia

"Why are my hands getting warmer?"

As far as Alicia was concerned, she was the daughter of a rich businessman attending high school.

Then, she feels off and at the same time, she's not.

One week later, her best friend brought her to another world(s).

This is Alicia Bell's tale.

1st book written in the Wizards of the Otherworldly series.

Wizards of the Otherworldly Court is a fantasy story about the Otherworldly Court, an inter-dimensional (or world-hopping, you get the idea) organization made up of people of all ages, gender, and race from many parallel or different worlds. They are granted elemental-like magic powers and called themselves 'Court Wizards'.

They are tasked to watch over the many worlds they come across and step into these worlds on 'missions' to preserve the balance, life, order, anything to make said worlds better places in the shadows but may reveal themselves if necessary.

However, these missions may partially or even fully oppose their nature, personal interests, and ideals. Yet, most of the Court Wizards are aware and willing to complete even the worst missions that would shatter their true selves that they will never cast aside regardless, either growing or regressing because of it.

Basically, it's isekai to multiple worlds but each book after Wizards of the Otherworldly Court: Alicia focuses primarily on one world while also discussing its lore in detail. Book Alicia is the introduction containing the essential worldbuilding of the Otherworldly Court universe you need to know while shoving in as many characters and worlds as I can. Also, each book will have a different main character, sometimes more than one in a single book, like Jojo.