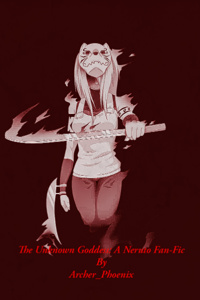 The Unknown Goddess: A Naruto Fan-Fic

Life is unexpected after all. Unexpected and mysterious. You never know what could happen. Even so people have certain expectations. Things in the line of reality. Things that could actually happen. Simple things. Like being a doctor when you grow up. Or winning the lottery. Becoming the president. These are all things that are within the line of reality. What isn't in that line is waking up in a forest in the middle of nowhere with short term memory loss. Even more impossible is finding out that you went from 15 years old to 5 years old. The impossibilities keep on going. Not only did she wake up in a forest, find out she was five and suffered from short term memory loss,she somehow stumbled upon the gate to the leaf village.

The line of reality had completely shatte red

Soooo, I have this story posted on webnovel by the same name and image, feel free to check it out over there if you wish. I also have the same user name and profile pic.

First let me start off by stating that you can tell that the writer has invested considerable effort into writing this, and they should be proud of that fact. But, their skills as an author need development and refinement because this story is very bad.

Even taking the OP protagonist insert to the extreme this story somehow has no stake in its own characters, namely that none of the characters exist except as foils for whatever development the author wants to push into. Railroading them into being useless without the protagonist or until the author needs them to act as a foil again for plot reasons.

Style:
The author's style is edgy, like someone revisiting a passes argument in the show so that they can gratify themselves in how they would emerge victorious if only who they were now could go back in time!

Meaning that the setting develops in chunks where events come about only to be resolved exactly as the author needs to show how, "Fantastically! Amazing!" the protagonist. Which stunts character growth, and the story itself becomes difficult since it will always need actions directly influencing the MC to advance.

Grammar:
The story is completely acceptable grammatically, though the author needs to work on their structure so that the story transitions better and to make the dialogue more fluid.

Story:
The story is wooden, in that there is little to no flow from one chapter to the next. This reduces many of the emotional or evocative moments in the story to monotone descriptions of how events play out instead of drawing the reader in, mostly because the author tells the reader what is going on rather than showing them.

Tsunade shouldn't have to be told Athena has a sleep disorder, she should be able to determine that through observation because she is a legendary medical genius.

When Hinata is opening up to Athena and is letting down her guard you should show it to the reader through her actions, like her stuttering less or by including descriptors like, "They sat in companionable silence eating cinnamon buns, sharing the moment-"

There are plenty more examples of the author telling the reader: actions, feelings, and emotions when they should be shown through their writing implicitly or explicitly.

Moving on from the mechanics of the author's story writing, as I mentioned earlier they also have the unfortunate habit of deus ex protagonist-ing everything and it gets tiresome fast.

In the first chapter the MC somehow manages to swing a meeting with the Hokage by ordering two chunin guarding the gate to take her to meet them, which-somehow-these gate guards not only don't question... But also have the status to not only set up a meeting without consulting the Hokage, and don't even need to vet the child who commanded them to take her to the Hokage to begin with. These are the same gate guards who were asleep on duty, breaking story immersion solely to move the plot along.

The MC then resolves all the paperwork the Hokage is doing through the implementation of her filing system, which is somehow superior to that of life long bureaucrats and turns out can only be done by her since it reverts to the Hokage being ineffectual once she isn't there to sort the paperwork. This is completely out of character for a five-year-old child, even if that child has memories of a fifteen-year-old. But more surprisingly the Hokage permitted a five-year-old access to his paperwork, especially since said child had literally just been introduced to him.

She can even demand that the Hokage call an emergency meeting of the top Konoha leadership claiming that there is a conspiracy with no evidence, cuss-out said leadership in an edgelord-nihilism speech about how they are the reason she hates humans, and get away scot-free! Her deus ex protagonist even kicks in and the villains admit their wrongdoings in front of the Hokage and their peers, which is pretty impressive since it is literally a nation-run conspiracy carried out under the order of the intelligence organization Root (the guys so paranoid they curse their members so that they cannot disobey orders or spill the beans). All because, and I'll say it again, they were confronted by an unknown five-year-old without any evidence. This scenario is then repeated to varying degrees as the story progresses.

All of this might seem minor, but it leads to a deeper underlying problem with the MC.

Character:
Namely that the MC is the best at everything, and has everything like a super-munchkin. She has every chakra affinity, she is a genius with everything she sets her mind to, and is the most galaxy brained of all geniuses.

All of which can be forgiven of handwaved if written properly, if you play into the trope of the OP MC, but this MC is such a depressing mary due. She somehow repeatedly emotionally runs away from ninjas into a forest while possessed and overwhelmed by her mysterious trauma-filled past, and is also the center of attention for every character almost as if they were used as foils without though towards their greater contextual meaning and position in the setting.

All this I can accept, but the author's biggest sin... The whole reason I wrote this review... Is because they complain that Masashi Kishimoto the author of Naruto can't write female characters (something I happen to agree with), and then this author goes on to write not only that same female character poorly but all the female characters poorly! Come on! Don't just make OP characters that are the best at everything, show weakness and their journey to overcome it. Don't just make them so powerful that nothing can challenge them if they are trying, just look at the shogi match:

The MC lost a shogi match, pretty unsurprising considering that the author notes the MC has never played before (somehow they know all the rules though), the problem with this how the author frames the entire event. Instead of this loss being impactful in any way, such as showing the MC is fallible and not omnipotent, her loss is swept under the rug so that the author can force the characters to wax philosophical about a juvenile bout of existential nihilism and show how edgy and dark the MC is.

Some readers might contest this, arguing that it is used to illustrate the MC's mental and emotional struggle with depression. A clear development not only for her character, but a clear rebuttal for my point on the MC being an OP mary sue. And they would be right, except that in the next paragraph it is deus ex protagonist-ed into a macguffin so that the MC can be edgy until the author decides it can be resolved.

Tbh i don't realy read fanfics all that much, but this one does put a smile on my face.

Love the Mc and her brutal honesty and i am very very curious about her past aswell that made her so Jaded (can't think of the right word this seems close enough).

I realy love the interactions with the other members of the cast, especialy with naruto. lots of feel goods here.

Read 20 chapters so far and can say that i will absolutly be checking daily for updates.

I would def reccomend that everyone reads it, lots of feel good moments aswell between Mc and the rest of the cast. 10/10

Love its my fav novel/fainfic ive read. i cant wait for more updates. 10/10 would suggest you read.

I've read quite a few fics, including naruto ones. Most don't really bring anything new to the table, just wish fulfillment. This one has an OP character as well, but battle and by extention the Opness isn't the focus. Athena, the MC, has solid problems, and organically works them out over time. It's not super focused on, and often happens during the time skips, but it also reflects the MCs desire to not talk about things. Something often skipped over in most stories, much less fan fics. I soldly thing Archer, the author, could write a stand alone novel and it be well recieved.

Style: organic, and skips over things that would drag on the story. I've always rather likes training to be a montoge instead of most of the stoy with a fight at the end.

Grammar: Sometimes there's mispellings, or a he instead of her, or missing knows. Not enough to hurt my brain, but it is what it is.

Story: I'm diggin the differences. They show how the author really put thought into how things would change beacuse of the MC. And good god is it refreshing that the author allows the Mc to change what she would logically and emotionally change what she wants/needs to, while keeping some things under wraps. It's also nice that the things changed are shown when the MC learns of them, and not shown when she doesn't know. Keeping a consistant PoV, and only showing minor scenes of other characters. Like what most of early, non-filler Naruto was like.

character: Solid Mc, I'm interested in knowing about with a colorful personality. The changes she cause in other characters are also consistant, and interesting.

I've read lot of Naruto fanfics recently and this one so far takes the cake. The character development is amazing and I can feel emotion from the text. I love how things are done. I feel it was extremely well-done and the pace isn't too rapid!

I can't wait for more chapters and look forward to her progression (Naruto's too!) in her path of ninja. :)

entertaining and recomended for anyone in to emotional Drama.