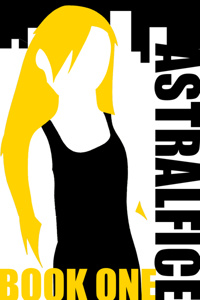 Astrid knits her fingers, awaiting Pell's judgment. A moment later, she feels Pell's iron fingers close on her shoulder, and the small woman pulls her into a hug from behind.

The two of them are standing in her cramped kitchen, the walls of which have been stained so many times that it is impossible to tell what color they may have been originally. A pot of stew bubbles on the stove, and one of the counters is piled high with chopped roots and vegetables.

“Thanks, Pell,” Astrid says, awkwardly squeezing her friend's arms. She bites her lip. “It was scary,” she whispers a moment later.

Pell gives her a squeeze. “I know. You did it, though.” She releases Astrid and returns to chopping up the mountain of roots on the counter. “How's the pay?”

Astrid struggles with the question for a moment. Until a few months ago, money had never been something that she has had to think about. She still struggles with figuring out how much things cost. Still, she knows enough to be aware of how little she will be receiving. “Lousy,” she admits. “They've offered to let me live with them though. They said that the whole team usually lives together.”

“That's wonderful!” Pell says with a grin. “Are you going to move in?”

“I mean, I guess. I wasn't really expecting it when Sylva asked me, so I told her I would? Things just sort of happened? I only just moved here and I haven't really unpacked, but it wouldn't be too hard to move. What's it going to be like, though? Am I going to have to share a bathroom? What if I snore and keep people from sleeping? What if everyone—”

“Astrid.” Pell looks at her and nods her head. “You are going to be ok.”

“Ok. Ok. Right.” Astrid takes a shuddering breath and nods to herself. She's going to be fine. She walks over and begins stirring the pot of stew, more to occupy her hands than anything else. “Have you heard of Sentineling?”

Pell laughs. “Of course! It's only the most popular sport in lower Inapithe! I can't get enough of it.”

“I wouldn't have told you pushed you to take the job if I didn't think so.”

Astrid does her best not to smile too widely. She and Pell pass the next few minutes bantering back and forth as they make dinner.

“As much as I'd like to keep talking,” Pell eventually says, “I'm going to have to kick you out for the evening. I'm going to be having company.”

Astrid blinks a few times, opens her mouth, closes it, and opens it again. “You're having company? You never have company. You hate everyone.”

Pell begins chopping the roots slightly fast her, and looks oddly evasive. “As it turns out, I may have met someone of the male persuasion recently. Said person may be dropping by for dinner.”

Astrid looks Pell up and down and takes in her unusually clean tank-top and the way her prosthetic and numerous piercings shimmer under the electric lights, as if they have been buffed. “Pell,” she whispers, a smile coming over her face, “You didn't tell me you have a date!”

“He's not a date,” Pell says with none of her usual bravado, her gravelly voice a few notes higher than usual. “He is simply a man, that is coming over for dinner. I recognize that you don't not see the appeal of that, but sometimes—”

“That's enough of that.”

“When's the wedding? Can I be your maid of honor? See, it'll be great, because even though I know all the embarrassing stories about you, I won't be able to give a speech, so no one will know.”

Astrid crumbles into laughter at the sight of Pell's apoplectic embarrassment. She manages to reign herself back in after a few seconds, and forces herself to be more serious. “Seriously, though, does he know that you—”

“Was once thought to be of the male persuasion myself?” Pell says dryly. As she returns to chopping vegetables, a genuine smile flits across her face, brief but joyful. “Yes. He's more than ok with it.”

This time it is Astrid who embraces Pell. They hold the pose for a minute, before a knock on the door interrupts them. Pell springs away, eyes wild.

“Shit, he's actually here on time. No one in this city ever arrives on time! I'm not even finished with dinner. Out the back door! Go!”

Astrid runs to the back door, trying to hold back her laughter as Pell tosses the whole roots into the pot of stew and skids around the kitchen in her socks, wrenching open cabinets. Astrid pulls the door open, but stops before stepping out into the cool night.

“Have a wonderful night, Pell. You deserve it.”

“Both of us deserve it,” Pell corrects. “Now go on, start a new chapter of your life.”

It had taken Astrid a much shorter time than she expected to gather her things. The only things in her apartment of real importance were her toolbox and her her clothes, and those had taken barely ten minutes to gather.

Now, she journeys through the empty and rapidly darkening outskirts of the city, bag and backpack slung over her shoulders. The shadows of buildings creep ever further along the street as the sun sets on Inapithe, giving the world a harsh, choppy quality. The only sounds are those of waves and the sharp cries of gulls.

The turret comes into view in the distance, an enormous and silent monolith standing sentinel against the horizon. Astrid's stomach twists into a knot. She could still turn around, she thinks to herself. She could turn around, and go back to her old life, and she wouldn't have to interact with anyone or do anything scary. She slowly comes to a halt, and casts a long look over her shoulder. Hesitantly, she picks up a foot, and begins to turn around, back toward her apartment.

“You heard about Zed's fight?”

“How could I not? They're crazy. No one in their right mind would go for the kind of stuff they do.”

Withing seconds of hearing the pair of voices, Astrid has hidden herself in the shadows of a nearby building, flattening herself against the wall. A moment later, Tove and one of her friends stroll out of a alley a mere thirty feet away, chatting animatedly.

“Your eyes doing all right?”

“They hurt a lot today. Going to dip some gloss later to take the edge off.”

“Careful, Tove, that shit can screw you up.”

“Oh, I know. Wish stims were cheaper so I didn't have to use it.”

Astrid watches them intently, holding her breath until her lungs are burning. Tove's jaw is swollen and purple from where Wendy kicked her, and her friend walks with a slight limp. Astrid can't imagine what they would do to her if they caught her, but it can't be good. The direction Tove and her friend are walking, they could see her at any moment.

Making a snap decision, she lunges out of the shadows, sprinting as quietly as she can down the side of the street. Her heart pounds in her ears, which strain to catch the shouts she is sure are forthcoming.

Somehow, she makes it. The next time she looks over her shoulder, Tove and her friend are out of sight. Astrid puts her hands on her knees and wheezes, sweat dripping down her arms and from her brow. Yet again, she curses her lack of fitness. When she manages to recover her breath, she looks up. To her chagrin, she finds herself directly in front of the turret. She must have panicked and run this direction, instead of back toward her apartment.

It occurs to her that she could still turn around, but she knows that she will not. The moment has passed, and it is too late. There is no going back now. She takes a deep breath, and then pushes it out as violently as she can, gritting her teeth.

Her next words are a promise made to herself.

“I'm not going to let anyone know I'm like this.”

Sylva answers the door before Astrid has even finished knocking, throwing her arms around Astrid in an enormous hug. “You came!”
“Yeah,” Astrid manages. “I sure did.”

Sylva leads her inside and up the stairs, halting her chatter only to occasionally beam at Astrid.

“First room on the right is yours, across from Wendy and two down from the bathroom. Its a bit cramped, but we can spend some time tomorrow making it cozy. Ignore any noises you hear in the middle of the night; my job has some odd hours. Breakfast is at eight sharp, at least in theory. If you need something, feel free to kick Drew out of bed, but whatever you do, don't go in Wendy's room. She can be awfully grumpy. Also, any old things you find lying around are from our last mechanic, so they might contain drugs. Maybe. In any case, probably shouldn't open them without a mask.”

Astrid nods along, half-listening. The room that Sylva leads her to has her name printed neatly on a piece of paper taped to the door. Looking at it gives her a strange, almost buoyant feeling in her chest.

Astrid carefully nudges open the door and enters her room. It is, as Sylva mentioned, somewhat cluttered, with crates taking up one corner and boxes scattered here and there. Instead of a bed, there is a bright red hammock slung across the back half of the room. There is a hole in the ceiling through which she can see the earliest stars beginning to come out.

“I know it's not much,” Sylva says, the guilt she feels clearly evident in her voice.

“It's perfect,” Astrid whispers. And in the strangest of ways, it is. It feels small, and safe, and manageable.

As she is unpacking, a prickle on the back of her neck makes her turn around. Across the hall, Wendy's door is ajar, and the young woman is staring at Astrid. Her expression is one of curiosity. Their eyes meet, and Wendy immediately shuts her door, though this time she does not slam it.

Arc One is over! Onward, to actual plot progression!