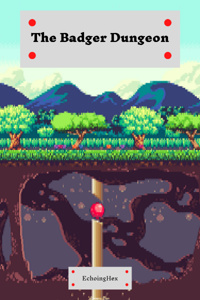 They're supposed to be places full of danger and loot, where heroes come to fight monsters, gain experience, and hopefully walk out with some really cool armor.

They're supposed to be controlled by a sentient mana crystal with an alien intelligence with goals only to expand, devour, and become stronger in order to protect itself.

Sometimes, however, they're home to a family of badgers and an assortment of other strange creatures.

Sometimes their core has absolutely no idea what they're doing and is really just trying their best, so can you all please stop judging them? It started out as a complete mistake and now they're just in way too deep to turn their back on the whole badger thing!

I love this!! Genuinely funny and great potential. I can't wait to see more and I really hope the author continues.

The spelling and grammar are great (unlike mine sometimes) making a good story easy to read and enjoy.

The characterisation is the core is really well done and I feel connected and engaged already. In just a few chapters, you already have a sense of the cores values and interests. This is no OP MC and neither is it a bumbling MC lucking their way through thick and thin.

The introduction of the badger family is well done and draws out the centeral qualities of the core. Though they are not necessarily engaging themselves, the feelings of the core towards them pulls you in to sting about them just as much. You get a real sense of why it makes it choices although it has an inexplicable annoyance with the appraisal skill 🤣

I like the style, the first person POV pull you in to the space with the core, exploring is small but expanding world. I would definitely recommend it despite its small size, as I think it has potential. Hopefully this review helps you make up your mind. Give it a try!!

This is still at a fairly early stage but it's an unusual dungeon core story. I mean it's a core, it starts in the ground, starts building a dungeon.
Dimensions are tiny initially - which makes sense, I always thought that a young core making 3 metre high tunnels and rooms was ridiculous. This one is more "borrower" sized initially and then becomes "palatial" when it summons its first buddy (a.k.a dungeon monster) a giant TWO FOOT TALL kobold ("I'm a dragon you know?"). Well at least the dungeon and it's wee dragon are to scale.

Eco-Friendly because the dungeon is sharing its space with some badgers (they aren't really aware). It's kind of like Nature Watch but instead of getting TV audience and credits the dungeon gets mana points. But it's first rule for the kobold is "don't scare the badgers".

So it's a really fun take on dungeons and cores but actually makes more sense than the usual sequence. I am pretty sure that if dungeon cores were real and could give points they would 5 star this one too.

Still in it's early stages, what I like about this story so far is the cooperation the core has with it's monsters. They feel more like a team than a boss and servant.

The first summon, a kobold, is particularly cute. I like that the kobold really appreciates how different this core is from other cores.

I think there's a lot of potential to build a fun and interesting dungeon!

Depends on your cup of tea

The style is the usual with RR, POV is mainly on MC, and very rare occasional side POV. Nothing of note, either good or bad.

The grammar so far is good. The only issues I think I spy are potential wrong/slightly incorrect sentence structure and formatting. So for instance one might see one too many commas or a sentence might be written in a weird way. Overall, nothing that really detracts from the story.

The story so far has mainly been light hearted, what little there is. Essentially, a new core has been formed, and it's basically fumbling its way along with half baked instinct on what too do, with a inner voice that sometimes explains what to do. Nothing of real particular note though.

The characters are good so far, the 3 we have. The core, the MC, is however the main focus, so only the MC has gotten real fleshing out, but the other 2 have started to be shown with decent success.

Overall I would rate this story a 4 out of 5 stars, but I hesitate to say whether I would come back to it. The MC is basically a fresh baby, no knowledge beyond what instincts he has. So this isn't a SI like other core stories you read about, if that's what you're looking for. Furthermore this one seems to be going solidly for the wholesome vibes so I don't believe there's any real action or drama one could expect for the foreseeable future unless the author does some weird out of left field tone shift.

This is definitely a story that some people will like, but for me it feels...for a lack of a better term, too meaningless? For me to put this as a story I'll be keeping up to date with. This will be a story that I'll (hopefully) decide to check back out months down the line if I have the free time, but for now, I'll be letting it stockpile chapters.