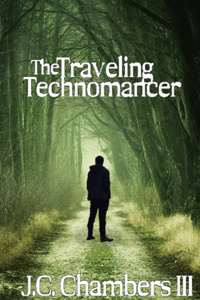 The Traveling Technomancer: A Westward LitRPG

When Owen Westward dies in a bank robbery, he is given a second chance at life in a new world filled with magic, adventure, and mystery. Although he is out of his element, he will use his knowledge of the old world in combination with the magic of this new world to become The Traveling Technomancer.

Story is aiming for PG-13 levels of content. Tagged with Profanity & Gore just to be safe.

The story has weird issues. The grammar is good. There is a glimpse of an interesting magic system, and the idea of a technomancer in a medieval style world is interesting and provides a good hook for the story.

But all of that is dragged down by the way the characters are written and interact with each other.

Owen wildly swings between "I have a strong psyche I'm good at dealing with stress" to "oooh boobies me likey".

MCs internal monologue tells us he is good at compartimentalizing and then the writing proceeds to make the MC act the opposite. The author tells us one thing, and shows us the opposite.

Azure herself is also a big bowl of not making sense. She casually shrugs off her entire team being wiped in front of her eyes, and her own impending death. So that she can info dump the MC and take care of him.

Theres also an issue with how Azure talks. In one of the chapters, a comment mentioned how she uses a lot of American slang, and that is very jarring. It indeed is rhythm breaking to hear a medieval spellcaster say something along the lines of "super", "like, yeah", and "did a number on him".

Theres also something weird about the consistency of the world. After the first fight, the MC and Azure are returning back to town, by slowly walking there. It takes about half a day to a day. They exit a forest, they pass through some valleys, they round a mountain(?), get to a large plain with a river in it next to a city. See what I mean? Its really hard to imagine such a world being real.

There are good ideas here, but the writing, world and character consistency are holding it back.

good so far with a few slight flaws.

I Have thoroughly enjoyed the experience so far. The MC isn't a typical wishy washy character nor is he some idiotic edge lord. He for the most part behaves like I would expect a survivor to. Especially after the actions he took that got him isekaid in the first place.

Still the story appears to be on a hiatus.

I just finished chapter 12 and saw that it has been almost 2 weeks since it was released. I hope all is well and that you are still working on this. A good start. I'm looking forward to more.

4 stars for being a decent start. I enjoy the different take the author offers on a tired trope.

Reviewed at: Chapter 9: The Guild Hall

Looks like i found my new favorite novel to read :D