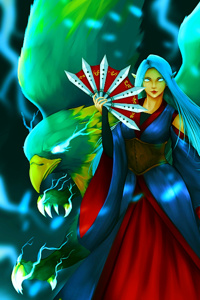 I've noticed a ton of novels I read that haven't been updated in a bit releasing new chapters. If this new vote option is the reason, I'm all for it.

I had become so steeped in researching arrays and construction formations that I almost lost track of time. I wasn't too worried that Elder Shadow would mind if I was tardy; he had never been one of those people that obsessed over promptness. But that may have been because I'd never given him cause.

I made it to his office in the time he'd scheduled for our meeting, only to find that he was missing. One of his subordinates passed a note he had left for me, directing me to meet at the Sects Sanctum.

Every Sect had one. A room that was secured from spying. A place that served as the fulcrum, the point of origin, where the Sects business was conducted. It was the place where Sect was centered, the outlying buildings and cave system only constructed once the Sanctum had been secured.

It was here that Sect Elder's met in seclusion when facing and making decisions, a place warded from all manner of intrusion. It was part of the Patriarch's private suite of offices, and although not sacrosanct, it was a place to be respected.

As I approached, I noticed two things. The first, that the impression everyone had when first arriving at Four Elements, that the Sect had been established at a fulcrum of each element and was well balanced between those four elements, became a pale imitation to the perfection of harmony that was centered around and within the Sanctum.

This place had been selected as the focal point for the Sect precisely because the elements here were so well balanced as to have achieved mellifluousness. The interplay and exchange. The give and take of the primordial nature of each element created a melody that evoked balance and unity. The elements sang of serenity and of calmness. It would take an effort of will to breach that island of peace with hostile intents and arguments.

The second thing I noticed was the confluence of four Spirits. Yvonne had said that every Sect was protected and contracted to at least one Spirit, but I hadn't realized what that meant. As attuned as I'd become to noticing and identifying them on my return from Xiwang, I'd expected to notice the Sects Spirit as soon as I'd landed. I'd been surprised not to find the presence of one when I'd returned.

Now I understood why.

Unlike the great towering presence of Wind, River, and Ocean I'd spoken with protecting Xiwang, these Spirits were both more and less than those tortured entities. The Sanctum had been constructed to allow each element a presence. It was more accurate to say that the Sanctum had been preserved to keep the uniqueness that allowed wind, water, fire, and earth to mix and mingle.

Natural chimneys had formed that allowed air egress, water to condensate and fall, feeding a small pool that had formed naturally, another pool of lava had formed, each pool separated by and restrained by metal and earth. The entire chamber was awash in spirit stones, saturating the chamber in Qi.

The chamber, as steeped in earth and metal should have aligned more towards the Earth element. Its presence was everywhere. It gave passage to air, an outlet for water, and restrained fire. But for some reason, it had either diminished itself to achieve balance, or there was some other agency at work I was unaware of.

I was uncertain if the difference in quality and substance between these Spirits and the ones protecting Xiwang had to do with how they were formed or the substance of the contract that bound them. I thought it likely that shape followed function and that the Spirits adapted their presence to conform to the tenants of the contract.

I was certain of one thing. The essence of Spirit that had gathered here was only a small fraction of the form and shape of each element. Each Spirit comprised so much more than what could be contained within the Sanctum that they had to be able to partition themselves. I wasn't certain if they used the same methodology as cultivators, creating Dharmic bodies and mind partitions to allow for multi-tasking, but they had to do something similar.

Whatever they were doing, their process was holistic, simple, and effective. It also served to hide their presence. It wasn't until I'd entered the Sanctum that they had triggered my Qi perception. It made them more effective Guardians of the Sect. Spirits that couldn't be detected by perception, at least not by those of the Qi Gathering Realm, could be used to defend and attack more effectively.

I had expected the meeting to be attended by Patriarch Umbra when I'd received the note to meet here, but was surprised to find what appeared to be every Head of Hall waiting. I had informed Elder Shadow about the smuggling I had uncovered in my missive, and I had assumed this discussion would remain private.

Both Patriarch Umbra and Elder Shadow had stressed the importance of keeping a low profile when recruiting me. My involvement in ferreting out the hidden actors behind the schemes affecting the Sect would be more successful with that secrecy. How was I supposed to remain discreet and nondescript when holding this discussion in front of so many Elders, each tasked with authority within the Sect?

"Patriarch Umbra," I said, bowing deeply. Elder Shadow had cleared his throat, reminding me that I wasn't alone and gaining my attention. I had been too enthralled by the Sanctum and the song of elements the Spirits were releasing, to remember the room contained the most powerful cultivator of the Sect.

"Elder Shadow has informed the Sect that you have had some issues," Umbra said, ignoring my inattention. "Explain."

Her voice had none of the nuance and emotion she'd displayed at our first meeting. She was robotic, unfeeling. Here, she was Patriarch, and there would be none of the familiarity she had allowed last time. I thought it likely she was constrained by the audience, until she knew who she could trust. She would trust no one.

"Unlike well-established Baronies and Fiefs on the mainland," I began, "the Fief I claimed as mine has some unique problems that are going to need to be addressed.

"Someone powerful enough to create an eight trigrams formation and form a contract with a Spirit of Wind, River, and Ocean established a town, a harbor, and dock. Whoever that cultivator was, it has been a long enough time since he passed through that the formation has begun to fail, and the contracted Spirits have been poisoned.

"The town is all but falling apart. The Spirits are dying, the ocean despoiled, the river poisoned, and the wind forced into new currents with the deforestation of the land. The eight trigrams formation has been allowed to decay, and the local Lord was using his people as batteries to power what part of the formation that still operated. He corrupted the power array allowing him to use beast cores and that Qi he was siphoning from his citizens."

"Were you able to discover the identity of this cultivator?" One of the Elders asked.

"And I'm not certain I ever will," I was forced to admit. "The town is steeped in corruption. Vital infrastructure ignored in order to line the pockets of a few. It is how the ocean became so badly damaged. The cores to keep the waste treatment array were never replaced, allowing raw sewage to be dumped.

"That might not have been a problem in a more open location, but the city was built on a natural harbor. A harbor protected by a reef barrier. The sewage was trapped, the water unable to disperse bacteria, disease, and waste as it accumulated."

"While inspecting the docks, I noticed an amazing number of ships docked. Considering how badly the town and area had been allowed to degenerate, those ships made no sense.

"What was their purpose?

"There was no cargo, no exports of note that would see so many ships adding this out of the way harbor as a port of call.

"As I was touring the docks, I noticed that certain areas were well maintained. Areas that stood out compared to how badly everything else had been neglected. Further investigation allowed me to discover proof of the Dock Manager's involvement in a smuggling operation.

"Someone, somewhere upriver from the town was farming a unique plant. One that can purify Qi, clear poisons, and condense those purified agents into a seed pod that has amazing healing abilities.

"The pods were able to restore two women, that had been used by the Lord, their Qi stripped so completely that they didn't have the energy to maintain life. Somehow those seedpods reignited the spark of energy they needed, restored some of that lost Qi, and allowed them to once again begin absorbing the world energy. All while removing the venom of a local insect they had been injected with."

I withdrew one of the seed pods from my inventory. One that I had harvested from the Torc. Holding it up so that each member could see what I did, I split the pod open to reveal the core within. The purity of released energy causing a stir as the Elders who had pretended indifference at my words before this, now sat up in disbelief and wonder.

"Seedpods that prove that plants can create and grow cores."

Thank you to those people that have joined my Patreon and supported me and Renewal and Rebirth.

Vote, comment, review... Every bit helps and keeps those of us writing motivated!

Bio: I'm a fanatic about reading. To say I read two to three books a day would not be exaggerating. If it's Urban Fantasy, Sci-Fi, or Fantasy, I play no favorites and give everything a chance. I love hard hitting sci-fi like David Weber. Urban like Ilona Andrews, and Fantasy like Mercedes Lackey.

I've always wanted to write a novel, so did so during the last NaNoWrite Month. This is an edited version of that novel.

Maybe someday I'll release the original chapters so you can see just how badly mass producing a book in only 30 days can be.