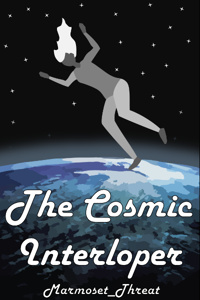 A cyborg transhuman escapes her corporate indenture and through unfathomably unlikely circumstances, she ends up in a fantasy world of full of unique magic, angry people with sharp implements, and the whole flavor-spectrum of divine entities. Hilarity ensues.

- No blue boxes or cultivation, this is not a LitRPG nor about martial arts

- Generally trying to keep this "rational"

My primary goal with The Cosmic Interloper is to write something that I myself would enjoy reading. Of course, that’s not the only motivation, but I think it’s the most important one for me to keep in mind, especially as the author. In fact, this whole story came about because after consuming oodles of fiction, I found myself craving a very specific type of story which I couldn’t find many examples of. Then I asked myself, “why not write it myself?” and here we are.

In general, while I’m not writing a comedy, I do intend for this story to be funny and a bit wacky or absurd. That said though, I am using this story as a vehicle to explore some potentially dark topics including (but not limited to) slavery, speciesism/racism, and existential questions of self, consciousness, and identity. Still, I’m going to leave the “traumatizing content” tags off, because I don’t feel that what I’ve written so far (or plan on writing) exceeds the threshold that would be necessary for me to tag it thusly.

Also, [insert your favorite boilerplate “views expressed” disclaimer here]. I shouldn’t need to say this, but the main character can be wrong on occasion (gasp!) and the way she views the world is not the objective truth (if such a thing even exists).

Reviewed at: 006-A: Contaminant, Woodswalker

The writing is well-practiced but beige and contains the occasional spelling mistake and grammatical oddity. Nothing which would prevent understanding but broke me out of immersion a few times.

The characters are well-done and project some depth. They are, however, mostly telling instead of showing who they are. Add in regular explanatory musings by the protagonist and you get the idea: this story, unfortunately, consists mostly of info dumps.

Don't get me wrong, there's a lot of cool stuff and interesting lore the author leads you through. The problem is that, eventually, it get's tedious to slog through the text walls (sometimes even repetitions). What excarbates this is the rather sedate progression pace of the main story line and the lack of dialogue, witty or not.

For me, the novelties this story has to offer barely outweigh the convoluted writing style. That said the only true novum to me was the idea of mind magic working like cyber warfare.

Again: Don't trust the hype. Read the first four chapters if you want a solid idea, so far there has been no marked change in tone. Personally, I'd say read this if you're in need of distraction (and fond of encyclopedia articles) but don't expect a truly engaging or meaningful story.

Better than I expected from the title

Reviewed at: 006-A: Contaminant, Woodswalker

The title was initially a turn off since it sounded like a Xianxia novel.

Gave it a try and glad I did.

Author makes no bones about following 'the heros journey'.  It's popular because it works.

Intro is a bit longer than needed.  Introduces a bunch of minor characters that we'll probably never see again and details that become irrelevant.

Reviewed at: 005-C: The Saint, Dreams and Nightmares

I have high hopes for this story, it has been very interesting till now. The portal fantasy trope is a bit overused in my opinion, but the way its handled in this story makes it feel like a fresh and unique concept.

This stories biggest strength is the world building. I am especially impressed with the mc's home world. It is depressingly dystopian, while also being disturbingly plausible. It also manages to convey this rich and layerd world without any infomation bombs.

Till now none of the characters is going win prizes for their uniquenes, but they do feel like actual people, and not just filler or objects to progress the plot.

This story puts attention in the details. And it enriches the story a lot. For example: the mc uses killoseconds for timekeeping instead of hours. And this makes a lot of sense for a society that has multiple planets. It also enhances the general alienness of the mc.

The writer shows to have good grasp on basic physics. So there have been no immersion breaking misrepresentations of science till now.

from what ive read so far...

The grammar is pretty good.

Enjoyed the realistic messages as well for the systems.

This is probably the first time that I have seen an isekai like story where the plot actually relies on the protagonist going back to their reality. I very much look forward to seeing how this progresses! If you like sci-fi at all, you will most likely like this!.

Went on Hiatus Just as it Was Getting Good

Pacing extremely slow; author not sure if they are writing sci-fi or fantasy so decided to toss in both.  When it finally starts picking up at the end of the initial introductory arc, the story stops.

This is a recommended fic if there are 10+ more chapters than what I've read up to.  If not, you will be sad the story stopped just as it was getting good, as I was.

MC is a female formerly-indentured nanotech infused criminal who gets portalled into fantasy.  She is just beginning to explore the fantasy world.  The author tosses in other perspectives, half of which I found skippable.  The MC's journey is interesting, and I'd enjoy reading more.

I think in going to enjoy how this progresses

I may be alone, but I absolutely adore when a modern day, or in this case a post-human cyborg, is dropped into a medieval setting and allowed to play with the locals.  It's made all the better when there is magic involved.  Dieties, Demons, and Saints?  Doubly so.  Add on excellent writing, believable characters, and Pratchett-esque trope inversions, and you have a truly marvelous story.

Binged on this story, found it an original take on some common tropes. The MC is well written and her origin story is compelling and absorbing.

In fact the scifi universe at the start of the story is so interesting that i'd happily read a fiction on that as well as the fantasy universe. (The fantasy world is a gread read too)

This is a great story, i would definitely recommend.