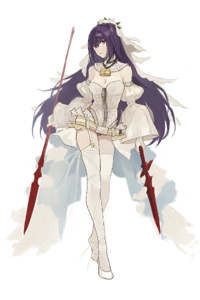 After Shidou left, Diethelm entered and closed the door behind him, he asked carefully,

“Your highness. If I may be bold enough to ask, could I know why you came to interrogate M.Shidou Toji?”

Azrael turned to face Diethelm. During all those two weeks, this man dutifully followed his instructions. What more, he was the possessor of a healing type sacred gear.

He decided to be a little more forthright with this man,

“Tell me. What do you think about devils? Or fallen angels?”

Diethelm tilted his head but still gave a perfunctory answer.

“They are evil beings who shouldn’t appear in the world and should be destroyed as fast as possible.”

“Hum...Beautiful textbook-like answer. But is it really what you think?”

Seeing that Diethelm didn’t answer, Azrael was sure that the man wasn’t truly okay with this definition,

“Let’s take this current situation. No matter how you see this. That high-class devil was truly in love with Masaomi. She didn’t give up on him even in death and never bent down. Tell me Diethelm. Was this devil an evil being worthy of being purged?”

"Listen, humans are very miserable creatures. We reject what we fear, we attack because we don't understand. Human's cowardice… Breed war. If you do evil out of a hatred for evil, that rage and hate will merely birth new conflict."

He let out a laugh as he said that,

“It’s so funny when I think about it. We accuse the devil and the witch of all our pain and of all evil deeds. Truly speaking, those races were truly the cause of many catastrophic events. But, could their evils deed compared to what we humans did?”

He shook his head as he said that,

“No, it’s impossible. Hundreds of years ago, angels, devils and fallen angels battled. It was truly a battle of epic proportions. But, compared to the two world war, this war between the three factions was nothing more than child play. Starvation, death, murder, rape. What kind of crimes did the so-called evil beings commit that we didn’t commit hundreds of times more?”

“Listen to me, Diethelm. There’s no race who is inherently evil. Nor there is a race that is inherently good. Good and evil does not depend on the race, but rather on the social value and the circumstance one was raised in. Not even angels are an exception to this rule. As for the church? Hehe...”

The sneer that appeared on his face was enough to give his opinion on the current church. He sighed as he stood up,

“You asked me why I traveled so far in order to find Shidou Touji? To tell the truth I just wanted to see. I wanted to hear from my own ears if one devil and one human, an exorcist to boot really managed to find love. I am sad to not have been able to meet them when they were still alive. After all, my dream is to create a world where all the races are in peace.”

After saying that, he walked out, leaving an astonished and flustered Dielthem. Those words of his were simply too shocking. It wasn’t different from trying to uproot all the foundation of the church.

Most exorcists were people who had a deep hatred for devils and fallen angels for different reasons. Asking them to make peace with their sworn enemies was basically asking for a revolt.

At the same time, he couldn’t help but respect this young man even more. He truly thought that the current system couldn’t keep with the times.

All races had some sort of alliances. He even knew about some hotels in different territories belonging to the devils.

The old times where exorcists only had to raise a holy sword and attack the devil was long over. But, this wasn’t a reality that people were ready to face. Anyone who tried to change this situation should be ready to face great hardship.

But if one could brave all those hardships and succeed, just how beautiful would it be?

After going back, the garden behind the house, Azrael saw the three kids still discussing as they put their feet in a basin.

Seeing Xenovia laughing at a joke from Irina, he couldn’t help but feel that letting her come with him was a good decision.

People who lived too long in a group would begin to follow two paths. Either they would slowly begin to conform to the rules of this group, or they would reject them and choose another path.

Until now, all she knew was from people of the church. All the values she learned were from the church. He didn’t want Xenovia to be constrained by the way of the church and become the kind of exorcist who simply followed orders without posing questions.

Once he was satisfied with what he saw, he finally continued to advance and soon entered their field of view,

“Irina, Xenovia, go heat the bath. Issei, stay here, I need to talk with you.”

“Ok!!! Xenovia! Let’s race. The last one is a snail~Goodbye Issei, see you tomorrow at school. ”

Irina already took a headstart as she posed those conditions. Xenovia, who was a little slow to catch up to what was happening suddenly jumped and began to run as she screamed,

Now alone, Azrael looked deeply at the little boy in front of him. Before sitting down next to him,

“Hey issei. How old are you again?”

Azrael raised his head as he looked at the sky, before finally coming to a decision,

“Hey, Issei. Do you believe in the supernatural?”