The dormitories for synths in training were relatively simple; a big, warehouse-like room with grey walls and dim lights. Walls like shelves were set in rows all throughout, forming hallways leading down to the back of the room. Set into the walls were a series of pods, stacked one on top of the other 50 pods high. Each one had been designed to be as useful and spatially economic as possible; they were only wide enough and long enough to provide a bed but there were desks that could be pulled out from the wall when needed, and computers, which were controlled by the chips in their hands. In one corner was a transmitter which would play announcements from their Overseers. They could program the transmitter to play news from around the galaxy if they were interested, or even - as DH had eventually realized - music from around the galaxy.

TO’s pod was in hallway C, on the right hand side:  twelve pods down the large hall and six pods up. DH had to climb up ladder  to the side to reacah their pod as it was far too cramped in the dormitories to allow flight. DH had been located down in row G, but TO had fixed that.

Only three days after they had met and started spending all the time they could together, TO had decided to have a chat with the synth that slept under them. It was relatively quiet at the time - some synths were sleeping, others studying. The synth under them, 46H56, was running a puzzle program on their computer when TO leaned down over the edge of their pod to observe them.

It took 46H56 a moment to notice that they were there, and they jumped when they saw TO’s face staring at them. They hit their head off the low ceiling of their pod and dropped their hands away from the computer, failing their puzzle. They muttered, rubbing the top of their head as they turned to face TO 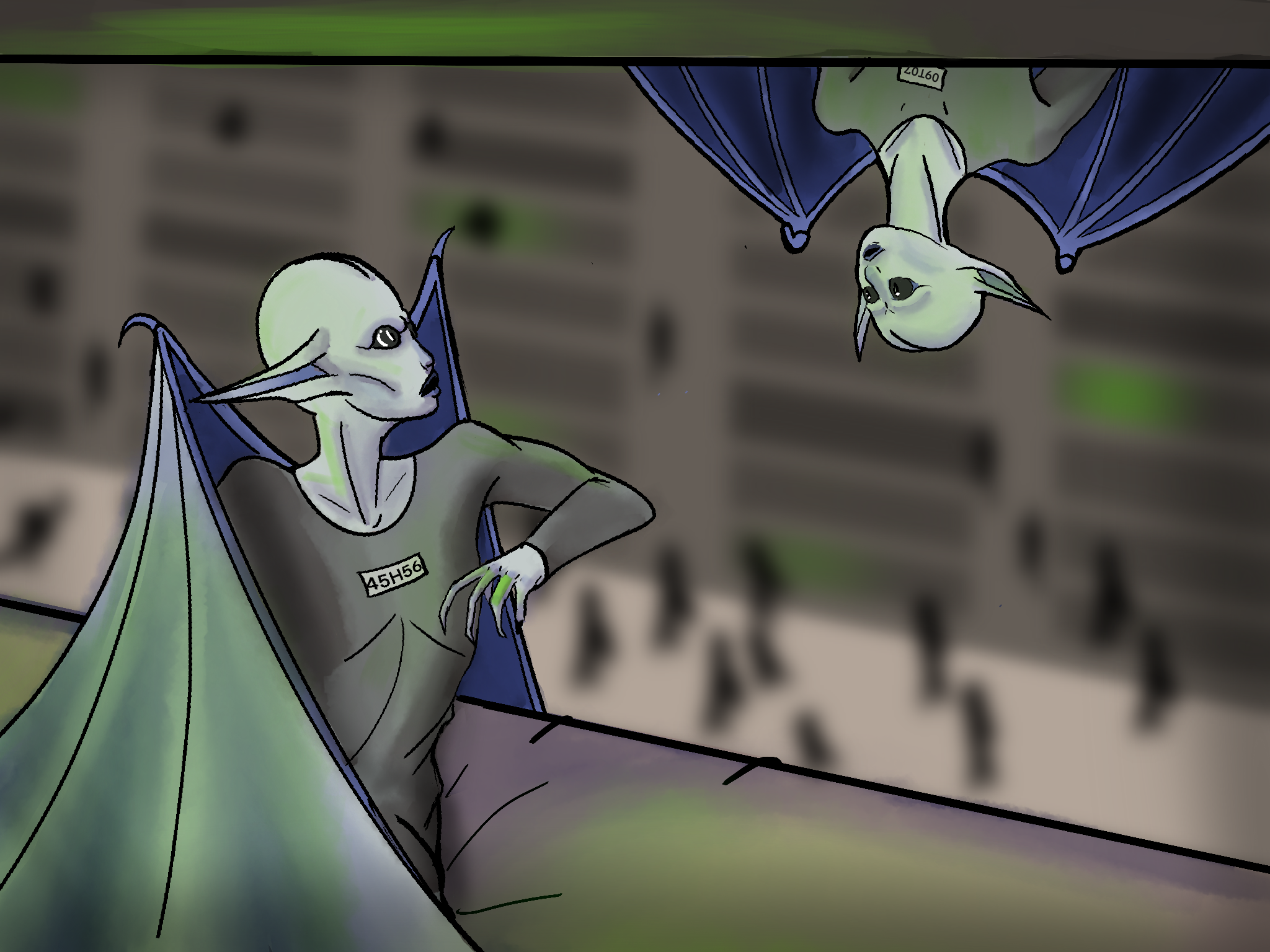 “I told you not to speak to me.” they said. 45H56 had been failure number 7. Questions about how their training had gone that day without a proper reason for asking (curiosity apparently had not been a proper reason) had earned them 45H56’s disdain.

Thankfully, TO had prepared for this. They had come up with a good excuse earlier that day when DH had told them that one of their neighbours had gotten angry at them for playing music on their transmitter. Best of all, the excuse wasn’t a lie, it just wasn’t the primary reason TO wanted DH near them.

“I’m helping them to improve.” TO said, “So, they’re going to sleep in your pod, and I’ll be able to keep a better eye on them. You can move to their pod and be further away from me.”

TO pulled DH through the crowd of unfriendly synths who gave them weird looks -but thankfully not looks of disdain- as they made their way to their pods after their training. Though DH slept under TO, they both climbed into TO’s pod. The transmitter in the corner was turned on and set to play some music as they relaxed and settled in. DH sat cross-legged on the bed as they started a logic puzzle on TO’s computer. TO had suggested that they work on puzzles to help improve their cognition.

Even though they were still technically training, there was a sudden change when they were settled in the pod together. They didn’t feel quite so tense when they were working together, and with the music on they could talk freely without anyone overhearing and giving them ‘the look.’ TO leaned against the curved edge of the pod- the thin sheets bundled up and propped behind them like a makeshift pillow for extra comfort- as they let their wings relax and droop over the outer edge.

“So, It’s gotten out that I’m helping you improve your flying.” TO said as they activated the chip in their hand. Just under the skin, a screen showed a series of files. TO choose the topmost one, and a holograph popped up before them, displaying a comprehensive history on the colonization of the galaxy which they had been reading.

“Is that bad?” DH asked, suddenly turning to TO and away from the puzzle.“Does that mean we have to stop?”

“Not at all.” they said as they flicked a smile at DH, “My Overseer approached me and said that they noticed I was flying with you during rest and recreation time. I said I was teaching you how to fly better.” They gave a satisfied grin, “Apparently, according to your Overseer, you’ve been improving quickly. They want me to help some of the synths who are lagging behind in my flight training.”

DH frowned as they considered this, their eyes flicking to the puzzle, then back to TO, “So… does that mean we’ll have more people with us when we practice?”

“That was suggested.” TO said, “But I said it might be better if I helped during normal flight training. So long as other Overseers don’t decide they want me to help with their synths, it won’t be a problem.”

DH released a breath that TO hadn’t noticed they were holding, a sudden look of relief flashing over their face, “That’s good.” they said.

“I wouldn’t let anyone intrude on our time together.” TO said, “If we had new people around us we’d have to watch what we say. We’d have to act like the others. No, I’ll keep that from happening.

“You!” Someone called from the floor. TO leaned over and looked down. to see another synth that they didn't recognize: a slightly more slender one than they were used to seeing.

“Yes! You are being noisy with your music. It is needless!”

TO pulled their head back into their pod so that the other synth wouldn’t see their ears. “It’s not!” they insisted, “We are working through logic puzzles and using the distraction of music to further train our focus!”

On the other side of the pod, DH was pressing their lips together, trying hard not to laugh.

“... Does that actually work?” The other synth asked, their ears now flicking outwards as they considered this.

“Of course it does. Why else would I be doing it?”

The other synth seemed to consider this for a moment before walking off, leaving them alone. When they were gone, DH started chuckling. TO gave their leg a playful kick.

“Shush.” they said, “Someone’s going to hear you”

“Oh, if they did I’m sure you could come up with something.” They grinned as they went back to their puzzle, “You’re helping me train my vocal chords so that I can be more easily understood when presenting information.”

“Yes, well, I will point out that my reasoning for our strange behaviour has worked.” They gestured out to the other pods, “Yes, nobody talks to us, but they didn’t talk to us before, just now they don’t look at us like we’re broken. We’re left alone.”

DH sighed and leaned back against the wall, “And if we’re being left alone… must I do these puzzles?”

“Yes.” TO said looking back at their reading, “If we’re going to be strange, we have to be above reproach in every other aspect.”

The idea that being competent, or more so; that excelling, could protect a synth from being corrected even if they were strange had stuck with TO. They worked harder than before in their training, and pushed themselves to study more and more complex materials even while they were spending time with DH. They had to be better. They had to be above reproach or they might be corrected.

DH sighed and looked sideways at the screen, the puzzle taunting them as they procrastinated. “I don’t understand it.” they said, “This puzzle makes no sense.”

“It will. Your mind will understand it and then you’ll be able to solve similar problems better in the future.”

DH nodded and went back to the screen, their ears flicking back in frustration.

All the same… TO hated seeing DH struggle.

“Or perhaps…” TO said carefully as they turned off their projection, “Perhaps we could work on a two-person maze?”

DH’s ears perked up. “That would be so much better.”

TO grinned as they went to the screen DH was working on. They navigated away from the puzzle and to a different screen. They could work on the maze together, figuring out the puzzles as they used their reflexes to get to the end. They huddled before the screen, leaning against one another as the simulation started up.

Before they could get started, they heard a shout from below. TO moved first to see what it was, and when they looked down they saw another synth, this one smaller than most others, being pushed out of the way by a bigger synth.

“You do not just stand in the middle of the path.” The bigger synth said as they pushed the smaller one out of the way.

The smaller one fell into the closed pod next to them, and watched as the bigger one walked on down the path. They looked down sadly at the floor, then glanced up, their ears turning in the direction of TO’s pod. They caught the sound of the music- their ears twitching along with the beat- then located the pod itself. When their eyes caught TO’s, they looked away and scurried off with their ears down and flushed blue.

“I think we might have found another strange one.” TO said as they watched the smaller synth go just a little further to their own pod- which was  on the bottom of the stacks- and closed the barrier. TO took note of where they were and tried to commit to memory what they had looked like. They were too far away for them to be able to read their number, but their short stature would make it easier to find them.

“We’re going to help them, right?” DH asked as they leaned over to look for the synth.

Still. DH was seeking out others. Were they spending time with TO simply because they had no other option?

“Of course we’re going to help them.” TO said, happy for the moment that DH was focused on trying to see where the synth had gone, and didn’t notice how low TO’s ears had drooped.

Bio: A writer and Illustrator with scenes to show and stories to tell