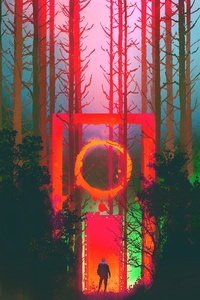 I pressed on through the labyrinth of the shop's aisles, the walls pressing in on me on any side. It is strange that we require bleach to be so far away from food in a store, but in a potion shop the walls are so packed together. I can’t at all imagine that mixing any of this would end well.

The lights were dim, instead opting for the magical fluorescent light of potions to take center stage. Glowing blues, reds, and greens sparkled out from behind protective glass cases. The store clerk followed behind me. I think of a few ways to get into a party. The best way would be if my grade improved; that would allow me to pick and choose parties at my leisure, if I was strong enough to be desirable.

“What grade are these?” I stopped at a shelf of swirling blue potions. The label above them read ‘Water Related.’ The potions at the top swirled in brilliant patterns, like light shining through churning water, they painted the world around them blue. The potions dimmed the closer to the floor they were stored.

“At the top, these are Silver grade swimming and water breathing potions!” The salesman unlocked the case, holding one of the crystal vials in their hand. The potion appeared to contain a section of the ocean, cut off and stored, churning of its own volition within the vial.

“I’m looking for iron grade water breathing.” The custodian's face wavered slightly, but quickly returned to a customer service smile as he unlocked and pulled out the bottom potions.

A grade could be applied to anything. According to rumors, it was a measure of mana density and purity, but that wasn’t known for sure. Magitech was the cutting edge of technology and typically closely guarded, what few patents that exist being claimed by either private Megacorps called guilds or governments themselves. Alchemy existed as a subset of that, the art of producing potions using system-assisted skills or modern chemistry and mana-infused reagents.

I held the potion in my hand. It was a dim, dark blue, barely moving within the vial. The reagents used to make it were mostly collected from the worlds beyond the gates, semi permanent attachments to our world.

The strong-arm control over Magitech meant that the only place to get a grade measured was either in a guild or at the government USAG hall. After the cashier rang me up, I made my way to the latter. The United States Avatar Guild was the United States' arm into the world of the Guild’s, working to enforce the law over the superhuman Avatars and the dozens of colonies spread across the worlds beyond the gates. They also contained and administered the gates that appeared in our world.

All gates that guilds or governments control come from the gates that periodically appear around the world.

A grading retest, like everything else, costs money. I could afford a few of them from the cores my system had given me from slaying goblins. System-generated, they were atypically orderly and structured. Most monster cores were disorderly and strangely shaped.

I strode through the shadows of monolithic buildings; headquarters for various private companies that ran operations in or around the gates. Seattle was one of the most prevalent cities on earth for gate appearances; in recent years they had only become more frequent. This led to it being a center for the evolving trades that grew around the “adventuring” industry.

The streets were packed, and I wove my way through them, in and out of the crowd. Twice, I had tasted a wafting trail of mana that reeked of monstrous appetite and killing intent. On the third, I darted into an alley to my left, before turning around and looking back towards the street. I felt it again, a sinister, fetid mana that passed by the alley, but couldn’t make out any source in the crowd of people. I felt it brush across my face, squinting as I looked at the alley.

The world was full of all kinds of people. Luckily I wouldn’t be interacting with them today. I exited the alley, making my way to the closest USAG office, a towering skyscraper. The lobby was the definition of opulence. I walked over to the clerk.

“Hey. I’m here for a rank evaluation...” Under a glass barrier, the employee slid me a piece of paper. Leave it to the government to still be using pen and paper for transactions. It was a paper invoice detailing the transaction. I sat at a table and began to fill out the boxes, waiting for a USAG employee to become available to greet me.

“Sorry for the wait!”

“No worries!” I passed the filled out form over, looking up at the middle aged clerk. I wonder how that attendant is doing...

“Okay… Looks right… just put your hand here and we will measure your grade.” The operator slid an orb shaped device over the table. I reached for the analyzer.

“He fuckin saw us. We’ve totally been made, Tom.” Dick said, looking over his shoulder in the crowded street. He pulled his black hoodie over his head, hunching over.

“There’s no fucking way. Hey, Harry, analyze the mana in this area.” Tom took a long drag of his cigarette.

“He had to have! Did you see him staring out of the alley? And that fucking look in his eyes…” Dick shivered.

“Kid's got a babysitter. This whole street is lit up.”

“Do you recognize him? Who is it?”

“Shit. Shit shit shit. Is he following us?”

The three of them made it to the corner of the next street, stopping and huddling.

“Is he following us?”

Harry paused before replying. “No. Looks like he lost interest in us.”

“There’s definitely no way we can invite him to the organization with a tail on him like this.”

“Not necessarily.” Tom replied. “The tail won’t follow him through a gate. Probably won’t want to leave a record.”

“Yeah, but who knows how long that could take?”

“If you want, you can go tell Goldy you were too impatient to extend his invitation. I’m sure that will go over great. No, we just need to make contact and invite him.”

The three of them stalked across the city, all the while looking over their shoulders. They jumped at every sudden movement and paused when they crossed the alleys between buildings. Eventually, they made their way to the back entrance of a high end restaurant, the local chapter house of the guild.

“Does he really have an assassin system? It would make no sense that he has a tail.”

“Yeah, unless they’re trying to find us.”

“That doesn’t make any sense either. Goldy woulda covered it up.” Tom leaned back into an ornate sofa, set in the middle of the tiled floor, and waved to turn on the gigantic television on the wall. “Whatever. We don’t get paid to think. If that silver rank comes for us… we just call Goldy. He will take care of him.” A wicked smile crossed his face.

Owl jumped over the rooftop, staring down at his mark.

“Excuse me, sir, this is private—” Owl jumped to the next roof, staring down at Damon. He stood precariously on the edge of the roof, his enhanced eyesight lending itself well to the elevated position.

Hmmm… what is that? Are they following him? Party members, maybe? Owl slid a flat camera from his pocket, zooming in and recording their faces. He watched as Damon ducked into an alley and they walked by, but from this distance, couldn’t hear their conversation. It seemed like Damon was waiting to meet up with them… False alarm. Owl thought as they walked by the alley.

Thanks for all of the love and support and comments, it is overwhelmingly great. Sorry for the posting delay, I went camping for the fourth and forgot to post before I left. I would also appreciate more people giving feedback and suggestions for the advanced chapters; my writing is still definitely in need of polish.

Also, over this weekend I just read the entirety of Discworld: Sorcery. It was awesome. Still mad I ran out of Blessed Time to read though.

Click the image below for the link to the discord (maybe, this is my first attempt linking an image)(also it will have one advanced chapter for feedback).

Thank you to my Patrons!