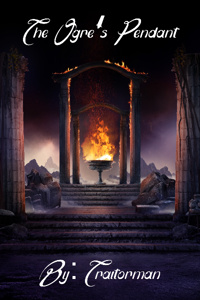 The Ogre's Pendant & The Rat in the Pit (Completed)

Final update for the day!

“Wurhi!” Ippolyte shouted. Dishevelled, she bore a make-shift torch and a fire poker. Her red eyes squinted at the Zabyallan in the murky light. “What’s happened?!”

“Move!” Wurhi skidded to a halt, attempting to slip around.

Thesiliea seized her by the shoulder. “Answer her!” she demanded. “We heard beasts and screaming and-”

Hellfire raged in the wine room. Men shouted. A monster bellowed in agony. Thesiliea grew very still. “By the ancestors…” she murmured.

“That’s your answer! Devils are trying to kill us!” the Zabyallan screamed. “Kyembe’s holding them off and I’m trying to get our weapons! Let me pass!”

The scratch of claw on stone froze her still.

“What…what in the firmament is that?” Ippolyte’s eyes grew wide.

Two abominations loomed at the end of the hall, silhouetted by the blaze in the wine room. Their eyes flashed, falling upon the little thief. Unearthly growls filled the passage, ripping through her bones.

“Go.” Thesiliea brandished her fire poker. “We will pin them down. Get help.”

Ippolyte raised her torch grimly. “To battle, then.” Her red eyes narrowed. “Come back quickly with our weapons.”

With undulating war cries, the Vestulai charged. Their improvised armaments pointed forward like spears. Wurhi gaped at their nerve.

The lupine devils lunged in return, their jaws slathering.

With striking agility, the warriors leapt back in unison. Their cudgels whipped up.

The beasts yelped, recoiling in surprise, and the Vestulai darted forward. Their movements were as water - so synchronized that one warrior’s motion bled into the other. Their weapons transformed into both whip and spear - cracking across lupine jaw to further open their guards. Then they thrust to the throat.

Wurhi gaped. Such blows should have proven fatal to any mortal thing, yet these devils merely staggered. Recovering, they snarled their wrath and surged forth, claws flashing. Skill and precision proved again a match for their preternatural speed.

With howls of anguish, they reared back. Each bore an eye gouged from its socket.

Before her horrified gaze their eyes were growing anew.

“By my mother’s mother…” Ippolyte murmured.

“Why are you still here!?” Thesiliea shouted. “Go!”

Guilt twisted in the Zabyallan. It felt as though she were abandoning the two warriors. A tide of black robed killers surged into the passage behind the wolves. She doubted that even the skilled mercenaries would last against such fatal resistance. “But what about-”

“Did you not hear her!? Our best hope is our weapons! Go!”

Wurhi grimaced. “Right.” With a quick glance back, she began to rush down the passage. The devils’ remaining eyes followed her. As she drew away, the beasts dropped to all fours and tensed.

The demons sprang. High into the air they leapt - each bearing the bulk of two men. The mercenaries ducked, thrusting upward. Such strikes would have skewered a charging lion, but these foes bore hides like steel, rending the fire pokers wholly inadequate. Unabated, the wolves landed on the stones behind them.

The black robed men rushed from the front.

Ippolyte whirled so the two Vestulai stood back to back: ready for a flanking assault. Such an attack never came. The demons - with eyes still fixed on the little Zabyallan - sprang after her in a fury.

“Wurhi!” Ippolyte shouted, but the masked men were upon them in the same breath. They could spare no more attention for small, doomed thieves.

“Shit! Shiiiiit!” Wurhi sprinted down the hall. Her body brimmed with vitality from Kyembe’s magics and moved with the celerity of terror. Yet the scrape of claw on stone drew closer behind her. For all her speed, she could not match the loping stride of these beasts.

As they ran, doors opened in the hall. The commotion had drawn Paradise’s patrons from their beds.

“Help!” she shrieked. “Devils! Devils are trying to kill us!”

“I say!” A portly man peered through a door. His golden clasped moustache swayed below his chin. “This might be a place of frivolity but your unnatural acts with animals are most distur-”

“Let me in, you idiot!” she shrieked.

“How dare you!” the old man blustered. “I’ll have you know; you speak to-”

His gaze shifted to what followed her.

His scream might have woken the dead. He scrambled to shut the door.

“You bastard!” she swore at him. With lungs burning, she sprinted past him.

The creatures snarled behind her. She heard the man scream again. She grimaced and braced for the sound of his flesh being torn apart.

She threw a glance over her shoulder.

The wolf-men had charged by the half-open door without pause. Their bestial eyes - now fully regrown - were fixed upon her. Her blood turned to ice. They had not come to rampage haphazardly through the pleasure-temple! They had come to hunt her! Why!? Didn’t demons usually go after the Sengezian!? Why her!?

‘That gem is cursed,’ Thesiliea had said.

‘Cursed as cursed gets,’ were Ippolyte’s words.

Wurhi grit her teeth. The irritable mercenary had been right. She was a terrible listener, though she heard well the hot panting of her pursuers. They would be on her in heartbeats. Her mind raced.

More doors opened in the passage. With each door opened, screams abounded in the pleasure-temple as patrons witnessed what horrors had entered their bower. Through one of the pass-ways up ahead peered a familiar face: a beautiful young man, looking out of place outside of his peacock-feathered costume. Wurhi’s heart leapt. The singer! That was the crazed knight’s chamber!

Upon sighting the beasts, the boy screamed.

Her heart sank as he flung the door shut.

She searched about frantically for another escape. Across the hall, the door to the Sengezian’s chamber lay open. Her eyes narrowed. If she could get in there, perhaps she could jump through the window.

Racing by the knight’s door, she prepared to leap for it.

A muted shout came from close by. “Defend yourselves, brigands!”

The muffled sound of heavy footsteps resonated near her.

Wurhi shrieked and whirled about.

St. Cristabel had charged through her door, both red-faced and roaring. It burst apart like dry grass. The knight bore a stone table as a battering ram, awkwardly levelled beneath her powerful arm, but seemingly weightless in her grip.

It was not so weightless to the hapless beasts it drove into.

It slammed them into the wall, and Wurhi could hear their bones grinding to splinters. Their yelps choked on blood. As they slid down in a twitching mass, the saint lifted the table over her head.

“Villains! You dare bring violence to this place of-” She stopped, snorting in surprise. “Amitiyah’s Tears!” she swore. “Monsters! Begone, fiends!”

She brought the weighty stone table back down on their bodies.

Wurhi cringed. She had once seen a vulture trampled by a panicking elephant in the Zabyallan markets. When its grey feet had lifted, the bird was nothing more than a red smear studded by black feathers. These wolf-men looked much the same.

A sigh of relief escaped her lips. “You killed them!”

“Not as yet,” Cristabel pronounced grimly. Her tunic was drenched in red. “Look. Even now they renew themselves.”

Wurhi stiffened. With each heartbeat, the beasts reconstituted. Their bone rejoined and their flesh ran together like water. Blood mixed with musk in the air as bone cracked and flesh made a sickening gurgle. “Oh shit.” She recoiled. “Oh shit!”

The saint looked to her, incensed. “How did this happen!?”

Wurhi winced. “I…they killed the doorkeeper and came in here like rabid dogs. They had men with them in wolf masks.”

“A cult of some sort,” the knight glowered. “But to what dedication, I have no knowing.”

Wurhi glared at her. “What took you so long!? We were screaming!”

Cristabel’s eyes fell. Shame clouded her features. “My companion and I had enjoyed a lovely night. We had retired afterward. I must confess, I was lost in the sweetness of dreaming.” Her lips tightened. “At a time such as this!”

She crushed them with the table once more.

Growling, she tossed the piece of furniture aside, sending it crashing to the tiles. She gripped the furred masses by what was once their throats and bodily lifted them high. Her blue eyes glanced to Wurhi. “Where are the others?”

The Zabyallan stared at the dripping ruins of meat.

“Ah!” she startled. “Back there! Kyembe’s holding off more of these demons and Ippolyte and Thesiliea are fighting their masked little shit-lackeys! I’m going to get their weapons!”

The saint’s face clouded. “Then they will need aid.” She turned.

“…where’re you going with those?”

“To reinforce our allies and-” She glared at the beasts. “-see if these can be drowned. Go with Amitiyah’s grace. And his speed.”

The Traemean knight marched into her chamber, carrying crushed devils as though they were sacks of feathers. The young singer screamed within.

“Wait, I thought you were going to help!” the Zabyallan cried after her.

St. Cristabel had kicked open the door to her balcony. The steam of the hot spring drifted through the air. Without pause, she vaulted onto the balustrade.

“In Amitiyah’s name!” she roared.

“Have you lost your wits!?” Wurhi shouted after her.

Shaking herself, she peered down the hall. She had a moment to breathe, and it had come time to deal with what seemed the source of her misery. Passing the remaining doors, she made for her room.

She dug within the fireplace. Her hands coated in fine grey soot as she dragged out what she had come for. A chain clinked. She lifted the ash-marred Eye of Radiin. Her eyes hardened at it. “Fine, you cursed little thing. Have it your way. You go back to your shit of a master!”

Fetching a small knife from the table, she ran back into the hall.

All about, more guest’s doors cracked open with cries of confusion and alarm.

Violence echoed all about.

She grimaced and hurried toward the weapon’s locker.

Guilt gnawed at her.

First, she would get their weapons. She had to fix this.

Alright, and that's that for the week!

I'd like to thank you all for following, commenting and for all the good ratings you've given me thus far. Always makes me happy to see. :)

Hope you continue to enjoy the story and that you all have an excellent week.

See you next time.

Please note that if I review you, I tend to see the positives in any work and seek to encourage people. I tend to review quite high. That's okay, as this is an amateur writing website. I'm no expert, myself, after all.

I like a lot of things, and I try to see both the strengths and the potential in any work and talk about those.

After all, most of the time, writing is a gift.

And I am not one to spit on gifts.

All stories and characters written by Traitorman are created by and are the intellectual property of J.M. Clarke