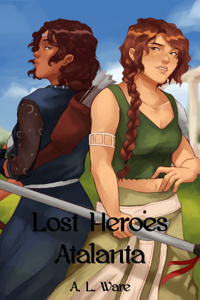 Everyone knows the stories of Greek heroes. Achilles, Odysseus, Perseus, Theseus, Heracles, and so on. Despite all the tales of heroic deeds, there was only one woman... Atalanta. Even though her legend was not lost to time like other female heroes, it was still tampered with.

This is her true story.

Odessa has been a Huntress of Artemis her entire life, having been rescued by them as an infant. She has been content to live her life, alongside her sisters in the Hunt, waiting someday for Artemis herself to choose her to join her personal handmaidens. Unfortunately, all that changes when the head huntress of her clan has a vision: the great huntress Atalanta is in grave danger.

Saddled with the quest to save Atalanta from some terrible fate, Odessa sets out to find the huntress. But what she didn't expect to discover was an upcoming footrace for Atalanta's hand. Suitors from all over Greece have been arriving to face the challenge. Whoever can defeat Atalanta in a race earns the right to marry her. However, if the challenger loses, Atalanta kills him. It is a brutal, dangerous game.

Odessa is determined to complete her quest. But as time passes, it becomees more and more apparent that the gods are meddling in mortal affairs. And even worse—she finds herself falling for the fiery huntress that she has sworn to protect. But with those responsible for Atalanta's secret arriving to seek revenge, Odessa will have to use her wits to outsmart them in their own deadly game.

A retelling of the Greek myth of Atalanta. First of a series on the lost heroes of Ancient Greece.