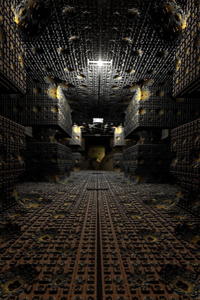 The plains around town were enveloped by fog, heavy and impenetrable. The tall and damp grass was difficult to navigate, sticking to the clothes and clinging like a desperate drowning man.

Soon, over a small hill, the ground sank. It went down and down, until a dark marsh shrouded in fog extended as far as the eye could see. David looked upon the vast expanse of water, mist and rotting plants and sighed. He had to go there, to cross the whole swamp and then keep going.

There was no time to waste. He didn’t know how much time the village had, how long they could survive without his protection, the only hero that was left. If a monster appeared while he was away, all would be lost.

He went down the slippery slope of the small hill. The soil was wet and his shoes were unsuited to keep his balance. He slipped and fell, and tumbled down the whole length of the hill until his fall ended in the dirty and stinking water below.

He got up and spat. The water was salty and tasted of rot. Molds and peat were thriving among the methane gases, and the air was putrid and heavy. The sky was dark already, despite it being day. There were clouds looming overhead, large and ominous, while the fog made their edges melt with each other in a large plain of dark grey.

There was nothing else for miles. Sometimes a small path would open up in the marsh, a passage made of roots and dirt. A drier piece of land, a momentary respite.

At other times quicksand would try to swallow him whole. Boiling pits of mud, where the decay that was going on underground released its gases into the atmosphere.

Something was moving in the water. The light, but unmistakable sound of a whirlpool where there should have been silence. David felt his throat know and his heart thump, but he could not run. He could not move. He was surrounded by mud and deep waters, standing on a small island of dry land in the middle of the swamp.

He swallowed, and summoned a knife. The cold steel was somewhat reassuring against his skin, but he knew that the short blade would not be of much use here. He had to think quick, but he didn’t even know what he was about to go up against.

Another sound. Then, something leapt out of the water, and slammed into his body. He was not quick enough to react, and fell down in the water cursing at his slow reaction speed. He landed harshly, and the pain he was feeling, coming from his chest, made him heave hard in search for air.

Whatever hit him, knocked the wind out of his lungs. But he was underwater now, and the gasping for air only made his situation worse. He swallowed large gulps of fetid water, while the animal stacked again. It slashed at his stomach, and tore open a large gash.

Blood was flowing, his entrails felt like they were being twisted and turned. At the same time, he could not feel his legs. There was something sticking out from behind his back, something was aching. It was itchy, uncomfortable.

There it came again. The half fish half beast, covered in mud and mucus, drilling the water and mud like a supersonic bullet. He met it with the blade, and it impaled itself only a few inches away from his face.

David laughed. He yelled in pain, as the laugh tore open his stomach even more, and he coughed blood. He could not feel his legs. His head was spinning. He felt another laugh surge from within, and his whole body shook and contorted. He looked down.

A pool of his own blood and viscera. He vomited.

And then laughed. He tried to stand up, but his legs were immobile. He stumbled and fell into the mud of the swamp. He pulled himself up again.

Then, he rolled on his back, and stared at the sky. The dark clouds were still gathering.

His vision was growing foggy. Or perhaps it was the fog that too was gathering much like the clouds. A raindrop.

His eyelids were heavy.

He closed his eyes. And slept.

“Current mission.” He said, his head dizzy as his conscience was in a daze.

Yells echoed through the swamp. Every creature burrowed deeper into the crevice they called their home. Aquatic spawn made their way to the edges of the plain, where it was safer.

Animals in the nearby forest howled.

And then he was awake again, David, alive and thinking.

He sprung to his feet like a charged spring, and grit his teeth. He started to march towards the end of the swamp, fast and steady, heedless of all that hid underneath. He could feel the waters now, he could feel them.

He could call upon them, he could command them. And command them he did. His anger found a way out of him through the waters, and they spun and whirled in his wake. Ravaging the plants, upturning the pockets of decay that were beneath. The earth too answered his angered call, and cam forth and created a path.

Working together, his magical powers led him to the perceived safety of the shore. There, he sat, and relaxed. His powers returned to their long sleep. His anger faded.

Heaving, he looked up. It was night now, and the large and bright moon illuminated the forest ahead through some small clearings among the clouds. Looking back, the swamp was bathed in silver moonlight, and the mist that was rising from the waters danced and moved like a living thing.

He could feel it, faintly, as the droplets of water in the mist almost begged for him to take control of them. But he knew he could not, for he was not powerful enough to do that. He only listened, and contemplated the magnificent and dangerous thing that was the world.

So beautiful, so perverse. So vast.

He had to go now, without looking back.