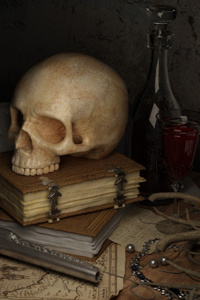 A Solitary God In A Dark Multiverse

Eons ago a devastating and apocalyptic battle took place that rocked every dark and loathsome corner of the multiverse. In the aftermath of the battle, deities, demon-lords, old ones, arch-devils, angel kings and archon queens, not to mention other cosmically powerful entities were totally obliterated. Despite this history-changing occurrence, life found a way and life went on in a godless multiverse for an unimaginable length of time. And in time, even the mightiest and most popular gods were nearly forgotten.

But one day, in a universe unlike our own, an altogether fantastic and magical universe, a deity is born. A new deity. A deity of a nebulous morality. Join the aforementioned morally unbound deity as he embarks on a quest to gain power, worshippers, and glory.

This story features a deity as its protagonist, but it's a deity who starts off alone in a dark and harsh multiverse. He needs worshippers to grow in power and has to earn his victories intelligently. He seeks to gain worshippers, discover the truth behind his genesis, and become the deity he is meant to be. He is a protagonist who will hurt others, and he's unafraid to kill and destroy what he can't control. This is his story.

If lore intrigues you, consider dropping by the World Anvil! It is chock full of juicy lore, and history, and it is slowly expanding as I add new articles to it. It is a place for me to write out the major details and introduce readers to the grander complexities that the story doesn't always let me write out in detail. If that is neat to you, here's a link: https://www.worldanvil.com/w/the-multiverse-lucianowrites

I really do enjoy the CONCEPT of this story. There are lots of brilliant and unique ideas being explored here, and it can be very enjoyable to read. But there are a few glaring flaws that prevent me from giving this story a higher score than 4 stars.

Next, what is the story? Yes, we've been told there's a goal to become an omnipotent god. But, how? 80% of the story so far has just been Althos talking to himself or the system about his powers. What about his interactions with mortals? I've yet to see the alchemist again. The only recurring characters, the goblins and the inn owner, are so one dimensional that I can't even remember their names. Althos has either threatened or awed most characters, before throwing them to the wayside never to be seen again. You keep introducing new concepts without ever finishing with older concepts. You never progress the story, you just add new questions. What is anyone's goal? What is their plan? How will they be threatened on the way to that goal? Where is the conflict? Where is the character?

I want to reiterate that I do like the concept of this story. I love all of the ideas that are present here, like a god evolving a civilization of ants. Or laws of the universe being sentient creatures you can converse with. Or a system put in place to teach baby gods. A domain of demons, the idea of other higher powers similar to gods but as different life forms, being able to bless and curse people based on domains, necromancy and druidity in a single entity. So many great ideas that I'd love to see fleshed out. I just feel that you're rushing things, and not fully developing any of the great ideas presented here, which turns a potentially great story, into a rather lackluster fantasy encyclopedia from the view of a detatched robot. I hope that you can improve your writing and turn this into the story I know it can be.

Urgh I think am ready to drop this now, I really like the concept and what you're going for with the story but the implementation is just poor, the dialogue is really stiff and your MC and some of your support characters are not believable and poorly written.

Firstly  Your is supposedly a chaotic neutral but his actions and thought process says otherwise 40 or so chapters in and the most significant thing his done is heal people and monsters. The only "chaotic" thing his done is made undead creatures which his done nothing with, no his not released them in wild so that he can cause "chaos".

Secondly the system in the story is really not doing the story its self or the MC any favours by being in the story, it's really really really not. All its doing is dumping info and being like an over protective grand parent to the MC. At this point it feels like it's a writing crouth to help move the story along but it's just pulling it down, there's a lot of telling and no showing, for example the MC would see something and wonder oh what's that? Then the system just dump shit load of info about who or what it is plus their entire life history thats not really relevant to the story and doesn't serve to move it forward.

To end my review I would like to say again that I really like the concept and this really has the potential to be a really great story but so far in my opinion it's not fulfilling that potential.

All powerful god awakens. Having dominion over many thjngs just after birth. Born with knowledge and instinctive drive to become powerful.

Then the 'system' arrives. Not the emotionless being programed to maintain the balance of the multiverse. But sentient overly chatty, and have questionable ability type of system. Displaying ignorance of simple things, and generally being unreliable. It may as well be just a voice in your head that knows a little bit more than others.

For the suppose god. He appears to not have any control at all. So much for his overwhelming powers that was sealed without his consent, and he couldn't care less. His skills talk to him and tells him what to do. So yeah, knowing words and not even knowing what the words meant apparently qualify you as god with dominion over knowledge.

Reviewed at: Chapter 15: Introduction To Alchemy

So this story initially caught my eye because of its concept, a newborn god, likely the last of it's kind being thrust into the world with the goal of finding out more about its powers as a deity.

The concept sounds good but the execution is honestly lacklustre, the first issue of many is the system.

It's supposed to function as essentially training wheels for baby gods, nothing wrong with that but- (say it with me) show don't tell.

This is something the story severely lacks, to the point where a large majority of chapters are info dumps, all the mystery of the main character finding out about the world and learning along with the reader is just gone.

When I discovered this story I assumed it would be about the curiosity of a baby god, since one of his domains is quite literally knowledge.

He is shown to be innately curious too, but when you have the system acting as a nanny to the main character telling him what everything is, taking over the main characters chance to figure things out for himself and improvise.

The system is there to lock the main character's power away and spew info, it holds the story back more than the author knows.

Second issue, stilted dialogue. If you look up the definition of stilted you will understand what I mean.

It FEELS clunky and awkward, it honestly makes it hard to continue reading when what should be one of the main aspects of the story, dialogue, feels like two robots trying to hold a conversation.

The third issue, the supposed intelligence of creatures, the main character is given the ability to talk to animals as a druid and god, we're told that these creatures, especially the goblin Triok or whatever his name was, is below average intelligence.

So, pray tell, why can he hold a cheerful conversation with a near-perfect vocabulary without seeming confused by any of the words or concepts the main character brings out?

I can understand if it's a goblin, they're similar enough to humans that I suppose it should be possible, but what about the caimon (lizard) the main character fights and befriends early on?

I don't know about you but being able to reason with an animal using language makes it seem a lot less like an animal and more like an intelligent sentient creature, and here's the kicker, the main character explains later that the creature isn't very smart.

It creates a large disconnect between what is happening and the main character's perspective and leads to being confused rather than immersed in the world.

The fourth issue, unbelievable happenings, what do I mean by this? So, early on the main character decides to feed ants some of his food that gives him influence over creatures.

he gets a unique title for it and apparently it has never been done before by any god, why? because no one would want insects to be under their control apparently?

That's all for now, having said all this. Author, if you're reading this you have a TON of potential.

your ideas are great, and you have some aspects of writing nailed down and your own unique style of writing that I can appreciate, Don't take this review as me telling you to stop writing, in the end, my opinion is just the words of one man.

Unique and good so far

The story is very entertaining and the first in a while i've enjoyed as much as i have. Recommended for annyone that likes god stories actually exploring faith, religion and "dao" or domains in this story.

Very exciting and entertaining story, and from the first chapters I knew this was for me! I love it, but there's some problems which I just can't explain, so I'll give it a four and a half stars! Don't stop!

A story that deserves more Recognition

Reviewed at: Chapter 69: The Symbols of the Past

A great story that is unique in its delivery. Rarely any grammatical mistakes and the characters are excellent. The style is a beautiful blend between formal and informal that makes it easy to read yet also challenge you to think. Overall great story.