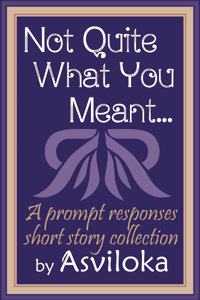 Not Quite What You Meant (Short Story Collection)

The bog-witch watches, unamused, as a pale golden cat wanders over and rubs at the queen's hand. Gently, with the ease of long familiarity, the queen picks the cat up, cooing as she rubs her ears, then reluctantly holds her out to the waiting hag.

“The firstborn of my household. Tayali is the only mother to have had children since my coming-of-age, and this is her eldest.”

“I did not come here for a kitten—”

“Oh, she’s fully grown. I’ve been trying to find a man for her, but she isn’t interested. Are you girl? Just like me.”

Lamir twists about in the queen's hands, trying to get down. Since the witch shows no signs of accepting the proffered cat, the queen cuddles her back to her chest. “It’s okay, you can stay here with me for a bit, looks like the mean old witch doesn’t want you after all.”

The queen's demeanor shifts, suddenly firm, regal and uncompromising. “And I don’t have one to give. No one in my household does. So unless you want Lamir, you’ll have to come back another time.”

The witch narrows her eyes. “You haven’t been staying single to cheat me, have you?”

“No, certainly not. I’m engaged to Prince Alvoserxes, as soon as the treaties are worked out at least. A process which neither he nor I have any control over, as it’s in the hands of our capable diplomats.”

The queen's voice twists a bit on that statement - ‘capable’ is giving them rather too much credit. But there would be an uproar if she took it upon herself to negotiate in person, especially with her intended future heir-father. The people would never stand for it. Such things should be impersonal.

“I’ll return in ten years,” the witch finally concedes. “I trust that will suffice for the treaties to be finalized?”

“By all the heavens, I certainly hope so,” says the queen with complete honesty.

In a puff of green smoke that smells faintly of swamp, the witch vanishes.

“I’m here for your daughter.”

The queen sighs gently. “Run along, Azirisa, I have to deal with this.” She kisses her heir on the forehead, motions for the girl to leave, and turns calmly to the witch. “My daughter? I’m afraid I don’t have one.”

The witch watches with ill-concealed annoyance as the girl vanishes down the hall. “The heiress is to be confirmed by the church in another month. Do you deny it?”

“No, certainly not. But she is not my daughter.”

“You are the queen.”

“She is soon to be the princess-elect.”

The queen shakes her head.

The witch scowls furiously. “No. I don’t accept it. You’ve been putting me off for thirty years, and now you finally have a child you dare to lie to me?”

“I’m not lying. You really should have researched our queendom more thoroughly before accepting my offer.”

“Why would I care about the petty rules of your petty queendom? I am The Bog-Witch! I don’t have time to keep up on the doings of mortals, on the rise and fall of your little tyrannies and boundaries! Just stop stalling and pay up!”

“I do not and never will have a daughter.”

“Then you have a very beautiful son, with a decidedly unusual title.”

“Then who are you claiming her parents to be?”

“Her father is Prince Alvoserxes, as I told you he would be.”

The queen shrugs. “That matters not to me.”

“My heir-father brought his own people with him for his household. I neither know nor care which of them he chose as heir-mother.”

“Well, then, if that girl isn’t your daughter, then who is?”

“I told you, I am and forever will be childless.”

“But no one means it!” The witch’s voice sounds almost frantic. “Everyone who says ‘oh, I’m never going to have children’, they all change their mind in the end.”

“No, nothing of the kind. We are simply fulfilling an old tradition, a ritual you might say. The blessing of a witch, you see, is a part of our inheritance. I inherited the blessings of the mountain-witch, the sea-witch, the ice-witch, the storm-witch, and the sand-witch from my predecessor, and I will pass them on along with yours to my heiress. Virgin to virgin, for otherwise the blessing is lost.”

The witch hisses in anger. “No one should ever hold so much power!”

“Then perhaps you’ll go to your witch-conclave and admit that you were outsmarted by a ten-year-old child? That I took your blessing and gave a promise which I will never break, yet never fulfill? Are you so selfless, so willing to accept the consequences of weakness? Yes, they could make things difficult for me, but I'll be dead in another century. Your reputation, though, how long would they hold this over you? That you needed to come begging for their help?”

“After all, five generations is not so long to you immortals. And surely, sooner or later, one of us will slip up. We are only human, after all. One day, all that power will be released and one or another of you will take your promised child, with all that power and potential.”

“I will wait,” the bog-witch finally says, as the queen knew she would. “You can designate an heiress, but the power will remain. You are right, we do know human weakness. If you ever once give in to temptation, if you ever once falter from your path, I will be waiting.”

The queen smiles. Then like the others, you will be waiting for an eternity. You thought yourselves so clever, thought humanity weak and careless, thought you could give us power and take it back effortlessly. We’re stronger than you think.

But she only says, “See you in ten years, then.”

And at last, a contemplative frown still on her crooked face, the witch vanishes. All that remains is a puff of green smoke smelling faintly of the swamps, soon to dissipate without a trace.

A note from Asviloka
Original Prompt:

u/TenthSpeedWriter: You are queen of this land. You are asexual, a hand-picked heir, like each queen since your nation's birth five generations ago. Today, on your 30th birthday, a witch knocks at your door. She wants to know where the hell that firstborn is.

Support "Not Quite What You Meant (Short Story Collection)"