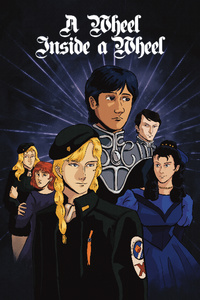 A Wheel Inside a Wheel

Two brilliant young me, Reinhard von Musel and Yang Wen-li, are forced to flee the countries of their birth and become refugees on opposite sides of a century long galactic war. While they both struggle to adapt to their new lives, their obvious talent propels them to the forefront of the war. Their choices will shape their adoptive homelands forever, and their clash will decide the future of the galaxy.

This story is broken up into volumes, each following one half of the conflict. You can read them in chronological order, or you can follow just Yang or Reinhard. See individual descriptions below.

Part One - Speaking in Tongues

When Yang Wen-li’s father dies, the only thing that he inherits is a mountain of debt, which can only be paid off with fifteen years of his life. Wanting to escape that indentured servitude, Yang flees his homeland and takes up a false identity in the Galactic Empire, a hyper-stratified society where stepping out of line is punishable with imprisonment or death.

Yang enrolls in the Imperial Officers’ Academy to study history, but despite his unusual and unmistakeable talent as both a tactician and a scholar, his classmates resent him for being a visible outsider. When tensions at the school boil over and several of Yang’s classmates attempt to murder him, Yang finds an unlikely ally in the top student in the class: the aloof Oskar von Reuenthal. But Reuenthal and Yang both have secrets, secrets which could destroy both their lives and their newfound friendship.

Part One (Alternate) - Talking Without Speaking

When Oskar von Reuenthal enrolls at the Imperial Officers' Academy, he doesn’t expect to make real friends. The IOA is a competitive place, and Reuenthal has never been well liked. But when a foreign student shows up to challenge him for the top spot in the class, Reuenthal can’t look away.

Part Two - Life out of Balance

When Reinhard von Musel's mother learns that her husband is about to sell her daughter to become the concubine of the Kaiser, she takes her two children, Reinhard and Annerose, and flees to the Free Planets Alliance, where the three of them must start a new life.

Part Three - Servants of the Pharaoh

Now an officer in His Majesty's fleet, Yang Wen-li struggles to maintain his principles in the face of everything that is expected of him. When he's unwillingly drawn into the politics of the court, he has to use all of his talents to keep himself and his new friends out of danger.

Short - Whatever It Takes to Keep the Body Warm

After their falling out, Reuenthal and Mittermeyer are both posted to the brutal wasteland of Capche-Lanka. It's difficult to hold a grudge when you're just trying to survive.

Three soldiers. Two bodies to be buried. One haunted house.

Part Four - Lighting Out for the Territories

While his sister has joined the fierce Rosen Ritter regiment, Reinhard's fame has earned him a post stuck on Phezzan. Instead of getting to fight, he's caught up in a web of secrets, including the shelter and care of a mysterious refugee from the Empire. Separated from everyone he cares about, Reinhard is forced to make some unexpected allies, and make connections with old friends.

After having sacrificed his freedom to save his best friend's life, Yang must figure out how to win, and not just survive, the largest civil war in human history.

This story is crossposted on ao3 at bit.ly/wheelinsideawheel

Reviewed at: SMST - Chapter Three - Sending It Along!

As someone who's never watched the source material i figured i might end up a bit out of my depths and missing some context but that feeling never was realized. Javert has done an excellent job in realizing a world and it's characters in an engaging and captivating way that kept me binging all the way through for the week it took to read. I feel like darn near every moment of that was well spent and left me wanting more.

The characters all come from a variety of backgrounds and it's evident in their voice and actions even as they grow and change through out the story. Each one with their own distinct voice, if confusingly similar names, that's obviously not Javert's fault, but i am so terribly bad at names :'(   I really enjoy that they (most pov characters) are all very queer, personally, but there's nothing so explicit that it would throw of most other less thrilled readers

The style is above average for this website, with a clear narration and smoothly executed movement through time and place. The time skips never seem to rushed or abrupt, and all have solid context to keep you grounded as well as enough overlap with other parts of the story to keep everything together. The pov changes can be a bit confusing if you are as bad at names as i am, but even then Javert tries to use names frequently enough that you are never left in the dark for long before you figure it out.

The grammar is darn near impeccable as far as i can tell. I was never once tripped up over a sentence structure or typo. Everything flowed smoothly.

The story is, along with the characters, my favorite part. Every chapter has things happening, whether it is character growth or plot progression and what a plot it is. It covers about 15 years of characters lives and we get to see quite a lot of the relevant and important bits without bein being bogged down in the nitty gritty of day to day activities. Everyone and everything matters and it builds up to the innevitable with a brutal and unrelenting certainty. There will be a bloody galactic war, and it will determine the lives of billions, with every character playing their rolls.

The reason i docked the story score a bit is because of the tendency to repeat the same bits but from a different perspective. It can be a bit tedious but there's usually enough new that it doesn't feel like a waste of time, and many readers will enjoy more time spent with their preferred characters.

All told i highly recommend this story to anyone interested in sci-fi, military, or drama stories. I only really like 2 of those and am still having a grand time reading.

Better than I expected it to be

To be fully honest, the first chapter of this story did not instil too much confidence in me. Yes, it was all well-written, and there were no parts where I could criticize the grammar of the stuff. But... there really wasn't much going for it.

The beginning of the second chapter had the same problem. After that? Well, things finally started happening. The 'unliked smart kid' trope began playing to the max, and some semblance of discontent began spreading in. I won't put out any real spoilers, but the summary puts it all out pretty clearly. He is not liked by most of his peers, is smarter than most of them as well somehow, and is bullied to a point where questions should have been asked. Oh, and he's also 15.

Don't take it as a negative thing. Really, this stuff is better than a good 99% of what you find on this platform(you can take that statement however you like). The references are nice, the innuendos are actually a bit subtle, and there is an undercurrent of British dry humour.

Overall, I give this whole thing a 5/5. Will possibly turn this into an advanced review in the future.