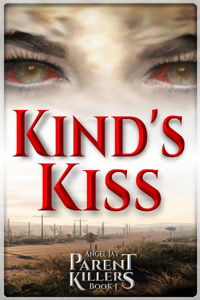 "I said 'at first'." David's eyes return to me, and his smile is almost evil when he continues. "I wouldn't mind the latter though..."

"You got the looks of one."

"I...." I look away. I'm a scared deer, staring at the headlights of a fast-approaching car.

Then David continues, making it worse. "You look cute when you're blushing."

He reaches out, his fingers brush my cheek, and I stop breathing. Somebody coughs. He looks up and quickly jerks his hand back. "Another time, perhaps. My jailer's waiting." He gets up and leaves.

I don't dare to look up. I know Camelia's standing there, eyes blazing.

When we file out I make sure she leaves the bus before I do. She might not put a dagger between my shoulder blades, but one of those silver nails would skewer me just fine.

We’re herded through the front entrance where a plaque tells the world how great the Kind Foundation is. Despite Camelia’s presence David and I exchange a look. He smiles sadly and shakes his head. There’s no escaping the long shadow of his father. We're sorted into boys and girls, and led to the slaughter - I mean changing rooms. Think of cold blue tiles, wet floors, the ever-present smell of chlorine and wet towels. People talk and tease, wet feet slap on the floor, and lockers bang.

Many places have individual changing rooms, and I like that. It’s not that I’m a prude or something. Nudity itself doesn’t bother me. We’re all human, and we all have the same or similar parts. Arms, legs, boobs, or the dangly bits of the other gender. It’s funny yet sad the way some parents go all out when dealing with simple things like dressing rooms and nudity… Should the poor children be exposed to their parents 'attributes'? Should minors have their own individual changing rooms? Should adults and minors share changing rooms when they are the same sex? The opposite? Obviously that would lead to a discussion of generic nudity, stuff people might do before marriage, and even after… And what if you have a different color skin or hair? Life can be hell when you’re born ‘different’, have kids, or parents.

Perhaps we should have segregated swimming pools, based on gender. Sexual orientation. Religion. Breast size. Color of your underwear. It’s amazing what people come up with as an excuse to judge and mistreat others. I’m not in a hurry to be judged. Of course, I could try to avoid swimming pools and group activities altogether. But that never works so I better get this over with.

So I follow the crowd, enter the public changing room, females only, and postpone the inevitable by watching the other girls change. Some of them came prepared and are the first ones ready to 'eye the competition'. They were wearing swimwear under their regular clothes, and I chide myself for not thinking of that.

The 'competition' brought boring, functional one-piece swimsuits. No bikinis or anything impractical or indecent, as we were told. Swim caps strongly suggested, goggles allowed.

The Jennifers thought otherwise and decided to put in some effort. Their outfits would require a redefinition of the word ‘practical’, stretching the term ‘decent’ until it resembles spaghetti, and leaving out the ‘suit’ part. Comments fly and people laugh. The Asian Jennifer looks a little abashed. I have the feeling she just went along, pressured by her peers.

Camelia ignores all the skin and commotion. She gets out of her dress and squeezes into a pair of long, tight swimming pants. I steal a glance. I’m surprised how muscled she is, something she hides well underneath those dresses. When Camelia puts on her cropped surf top - red, obviously - I turn my back towards her and the room. I open a locker to stash my stuff, then start undressing.

I have scars, lots of 'em, all the way from the top of my shoulder blades down to my buttocks. It's as if someone drove a lawnmower over my back, then left for the shed to get a lawn aerator and do me twice over. The mess has faded somewhat over the years but there's enough left to draw attention. I know it has something to do with my father, but all I have is the memory of a hospital bed, pain, and vague faces. I've asked Mom to no avail, she doesn't want to talk about it.

I know little about the scars and perhaps even less about my dad. His name is Myrddin Merle. I have no pictures, no letters, addresses, anything. All the little bits I think I know are circumspect at best. Most come from Uncle Charlie, who is supposedly my father's brother, and perhaps the only real family I have left. Besides Mother, of course.

Uncle Charlie told me to be proud of my scars. He's also responsible for making things worse.

Mom and I visited him a few times when I was still small. They both said 'hello', and she would leave me behind, for a couple of days or weeks, to accomplish things she couldn't do with me around. Yet another one of those taboo subjects.

Those visits provided good times for a young kid weary of traveling. I remember my uncle's face, a small cigar hanging from the corner of his mouth. I remember the low-roof buildings and dusty pickup trucks. Hunting small animals in a dried-up river bed. Riding shotgun through the endless brown and grey fields surrounding the town. Admiring Jose Louis's card tricks.

I had a secret crush on my uncle's assistant Jose, which he probably thought was funny. He was a young, handsome man who did the odd job for Uncle Charlie, like making coffee, or cleaning up the bottles before a customer arrived. He and my uncle played cards often and passionately, and cheated whenever they could.

But what stands out most in my memory are the stories my uncle told me. Somber tales about ghosts and spirits and Mexican gods, stories that got even better after a few bottles. Tlaloc. Quetzalcoatl. The Legend of the Cempasuchil. And tales of Pwyl and Culhwch and Olwen, characters from the old continent. He worked them into his designs, and many a client walked out with a piece of mythology embedded in their skin. Jose Louis could handle the simple stuff, but the more complicated stuff was done by my uncle, and Jose Louis worshipped him despite their endless fights.

Uncle Charlie was the real artist. He was - or is, as he might still be alive - a middle-aged, bald guy, driving a '72 Chevrolet El Camino, and running a tattoo shop in Pojoqua, New Mexico. He inked me.

I picked the design myself, the snake and the skull encircled by a thorny wreath of roses. My uncle must have added the pig Latin words decreeing me a maiden of death. Or it was always part of the design, and I never noticed. I was young. Fortunately I always had good taste, even at the age of six. Imagine how my life would have been if I had picked a pink pony.

Mother was furious when she returned. Needless to say, we never visited him again.

Funny though, other kids didn't mind the whole 'maiden of dead' tattoo thing. Envious, yeah, and then bullying me because of it. Their parents however... I guess it does take some explaining when you are an upstanding teacher with a good reputation, and your daughter sports torture marks and a tattoo straight from a Metallica album cover. Mom tried different stories yet only one would stick, and so it became our official line. I understand that, as a single parent, as a substitute teacher, you don't want to answer certain questions. And as a child, you don't want to suffer the stares. Disapproving if you're lucky. Rueful and understanding and compassionate if you're not. As a daughter, you don't want to hear your real mother say how you were adopted, the abused child of a distant relative.

Believe me. The pitying stares hurt more than the scars ever did.

Whispers break the silence. Someone giggles and nervous laughter follows. A small cry of envy. And then a collective snicker when one of the meaner girls whispers something foul yet funny. Schadenfreude is always the best. Evil bitches…

I sigh and put on my swimsuit. It’s a high-necked one-piece affair, white and a little too classy, but it does cover my back completely. The zipper is a pain though. Perhaps I should have put on the damned thing before leaving for the swimming pool but, well, it would have looked funny. And... I didn't think of it. I sigh once more and reach for that stupid zipper when a small hand settles upon my lower back. I freeze.

“Let me help you,” she says. Then another hand zips me up.

I breathe in, and out, in and out again. Slowly. Then I turn and look at her. Camelia looks up at me, head tipped back just a little. She has tied her long hair into a ponytail, which makes her resemble a smaller, younger version of McKinnon. Camelia's non-zipping hand slips down and comes to rest on my hip. Instead of the usual cold, icy stare, she gives me a look full of quiet understanding, loneliness, disappointment, and something else I can't place. A drop of water crawls down from the corner of her right eye, crawls, falls, then mingles with the other drops on the tiled floor. With a shock, I realize she's crying, and I open my mouth to say something stupid.

I swallow. The crowd is watching, I know they are. Half the girls are hoping for a fight, the rest longs for a kiss. Neither is going to happen anytime soon.

“Get a room,” one of the meaner girls says.

Camelia’s face goes blank. Then a whole range of emotions flicker by, none of them pleasant. She bares her teeth and I flinch back, but she isn’t looking at me, she's reliving a memory from her past. When her eyes focus again they have returned to their cold, deadly pale grey. Her mouth forms a thin, predatory smile before she turns to face the crowd. The voices and splashing sounds from the swimming pool fade away. Time slows down, people stop breathing. The only sound left is that of water, dripping from a leaking faucet in one of the shower stalls. It guiltily drips… drips… drips away.

“Mine,” Camelia growls. Her head swivels slowly from left to right and back.

I shiver. Nobody dares to speak a word while Camelia leaves the dressing room.

“She’s scary,” I repeat, and try a smile that just won’t fit.