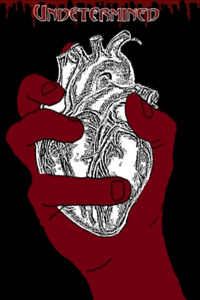 Walking through the darkened streets of a medium sized town was a gorgeous woman.

If one were to ask what stuck out about this woman in particular, the first thing one might think would be her blue hair, however the current state of the woman's expression would immediately take away from this first impression.

Her hair was unkempt, disheveled in horrid manner, and her eyes were filled with veins.

A demented smile plastered her face, and she looked around with madness as she walked through these dimly lit streets.

Reaching to her side, the woman gripped her sword, reassuring herself.

The woman walked forth, swaying her body as she made her way through the crowds.

Yet the people did not so much as stare or turn their heads.

For within this realm of darkness, madness was the norm.

The existence of a single woman who had gone mad was nothing more than an everyday occurrence, in the Dictatorship of the Determined.

Bringing her sword to her mouth, the blue haired woman smiled with madness.

The woman was in a small cavern outside the city, dimly lit by torches on the walls.

This small cavern was filled with all sorts of trinkets and living supplies, but this statue took the center stage as the woman stood before it, looking to it with fanatic reverence.

This single word resounded in the mind of Mackayla.

A voice so soothing and beautiful yet so sinister and demented.

It was enough to make the woman fall to her knees in awe, smiling with madness as she savored the statement.

The woman smiled horribly, delighted just to have received a response from the object of her fanatic love.

The voice spoke with kindness, however it then became horrible and corrupted as it finished off the statement.

[Until more fools appear, that is.]

[Of course I won't. You've been so loyal to me for such a long time. Thank you for that, Mackayla.]

Mackayla responded with a tear streaming down her cheek, overcome by the sweet tone of her ruler.

Looking up, the woman smiled, bringing her hands to her head as she used her fingers to comb her messy hair.

'Ah..... madness is such a wonderful way to make even the most obstinate ones obedient. Don't you agree, my other self?'

'It certainly has stopped those who are lovers of justice from pursuing their own goals. By driving them mad with fanaticism of myself, I have prevented many from going down an irredeemable path.... and as a result there are many who I have not had to kill.'

'Of course. After all..... when it comes to those who wish to pursue justice above all..... they are the most obstinate when it comes to changing their views. They will stick to their morals completely, and without extreme measures, they will never change. However....'

Resting her chin on her left demonic hand, the woman who was both good and evil smiled wickedly.

'If you are able to shift those views, then they become the most fervent of all.'

Sitting at a grand table with enough seats and enough food to host a banquet were two figures.

These two figures were dragonic demons.

The first was a female with bright green hair and magenta scales, and the other was a male with blue scales and a darker shade of blue for his hair.

"When her eminence absorbed our powers at that time, our personalities didn't change too much."

The female currently lay in a pile of her hair, both of her eyes closed as she spoke.

The male on the other hand, stuffed his face with the delicacies, hoarding them one after another.

"She gave us our powers back, but Envidia changed significantly after having her power stripped. Yet you never stopped shoving every edible and inedible thing into your mouth.", the girl said without moving.

"Nom nom..... mhm.... and you never stopped forcing me to carry you around places.", the man responded as he continued to reach across the table, gathering all the dishes in front of him.

"Why is that?", the girl asked, raising her face so that her hair no longer covered one of her eyes, which she peeked open.

Looking to the girl, the man stopped eating as he begun to think to himself.

"Perhaps because that's how we already were in the first place?"

The two sat in thought, however the man now took a piece of bread and slowly chewed on it.

"I think it has something to do with the fact that Envidia's jealousy for Evelyn had depreciated over time, but my love for food and your desire to rest never dulled."

Plopping her head on the table, the girl immediately took her rest, falling asleep on the spot.

It was then that the door bursted open.

"It's rude to talk about people when they're not present you know."

"Hm? You could hear us talking? Well, not that it really matters. It's not like we were saying anything bad."

Walking into the room were two elementals, both with similar hairstyles in zigzagged ponytails, complementing one another.

The first was a being of ice, and her dress likewise was made from ice.

The second was a being of lava and flame, wearing a matching outfit of fire.

"Please have a seat, guests. It is not often that Sir Gormand and Lady Apathia invite anyone to this place, therefore as your chef, I will ensure that-"

As the man pointed out two seats, he looked back to see that Gormand was eating the food on both of their plates.

Closing his eyes, the man wrinkled his brows.

"That enough food is prepared so you will be able to at least consume something while here."

"Hey Gormand, what the hell!? Eating our food before we even sit down!? What the hell kind of reception is this!?"

"Who said it was your food? My chef made it."

Envidia stood forward, quickly taking a seat as she pointed to the now empty plate.

"But I'm the owner of that plate.", Gormand responded.

Holding her hand to her forehead, the woman of flames merely let out a 'tch!' in irritation.

"The next person to talk is going to regret it.", Apathia mumbled from underneath her hair.

"WOULD YOU ALL SHUT THE HELL UP!"

A single instant had passed as Evelyn spoke while taking her seat, when Apathia disappeared from her own seat, grabbing the head of the woman of ice and throwing her to the ground, causing the very floor to crack open on impact.

And then, in that same instant, Apathia was once more in her seat, her head laid in her hair as she slept.

"Sister. You ok? You gotto listen to Apathia when she speaks. She has a pretty bad temper.", Envidia stated without looking down.

"That's right. You don't just talk when Apathia tells you to be quiet.", Gormand added, crossing his arms with a series of nods.

Evelyn meanwhile, merely stood up, her head throbbing and her mind filled with confusion.

It was then that the room became a pinball machine.

And Evelyn was the ball.

Flying all around the room and bouncing off everything she hit, the woman tumbled around the room with complete confusion, however she eventually landed in her seat, stars in her eyes.

The room was silent for a few moments, however it was then that laughter broke out.

All three hosts, with Evelyn aside, began to laugh lightheartedly.

Evelyn merely looked around, slowly coming to her senses.

Shaking her head, only a single thought penetrated her thoughts.

And then, she let out a light chuckle.

'How strange they are.'

Bio: Hello. I am DubstheDuke, an engineering student who writes novels for fun. Please check out my series "Undetermined" if you are interested in a nontraditional story where the differences between heroics and naivety are explored, and the main characters are more self interested and evil than they are kind hearted and compassionate- with some spouts of insanity.