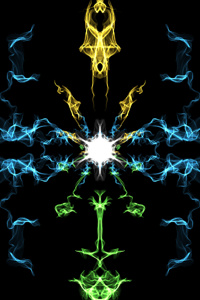 She died. Or maybe she didn't.

But something took an interrest in her. So now she is here. The Labyrinth. How will it change her ? I can't wait to see it by myself...

"To rise and to fall, sides of the same always spinning coin, just dependent of the point of view. Is this the end of something ? The start ? Both ? In any cases, I’m eager to see what this hive-shaped poisonous insect jar while held. It’s always dangerous to make a Kodoku..."

Whispered the voice, but the young woman was already sleeping deeply and didn’t hear her. Those words were lost in the void, auspicious of a uncertain and chaotic future...

Warning : Sexual content, with potential gore in it, maybe rape, and general gore and other shocking matters. Sensitive soul abstain. (or try it and see if it's that bad.)

Release are whenever i've the time to work on it, which is something very random. I will try to upload something every three days, though.

Cover was made with Silk: http://weavesilk.com/ which is licenced under Creative Common ^^ And by the way, if anyone want to make a fanart of the novel, I would be honored to use it as the cover ^^ I greatly respect illustrator, keep creating amazing piece of art, you're the best ^^

Important Note : This is in Hiatus for now, because I need to focus my mind on something else, but I don't intend to abandon it. When I've the mind for it, I'll take it and rewrite it partially, rearrange it and correct the shit-ton of error I made ^-^

Great! But not for me.

Reviewed at: Not a chapter - Little piece of information 2

I can immediately tell why people would like this novel, it just itches the right spots for them.

However it itches the wrong spot for me, but it doesn't mean it's bad as a novel - in fact I'd encourage anyone to read this and see if it itches the right spot or not.

It's approaching the dark-area of fantasy, from tentacles to some gore it really goes far and describes well. The multiple POVs for me is a bit much, I do think they're interesting but I would've liked more of the main character at the start. (The POVs were good in themselves)

A very interesting concept for a story. The MC is essentially a blank slate with nothing but a name and they have to survive in the labyrinth, from increasing her skills and getting in the tentacle pool. Has great potential for a long novel if continued to be done well!

For someone who doesn't have English as their first language, I applaud your skill and effort at the language. Unfortunately I have to be quite truthful about the grammar, it's good but not great. Oftentimes there are spelling mistakes, grammar problems but they're mostly the little things and don't really impact the story all that much.

If English was your main language I would have did about a 3 star, but I am very obssessed with spelling errors and such. I find it hard to read a novel that has it consistently and other people could easily deal with it, preferences? I don't know, probably.

The MC is interesting, but I haven't really found a way to relate or begin to like her. It would probably get better throughout the chapters but as an author you want the reader to get stuck on your character immediately, she needs a special flair or quality. She is just too plain.

The other POV characters are more interesting than the MC in my opinion, which isn't what you want. But if you could apply what they have onto the MC then you're golden.

A very interesting and enjoyable novel that has great potential. LitRPG being thrown into a new setting as far as I know, and it looks to be doing well in regards to that. A main character that leaves much to be desired, however she certainly has potential too.

For those who want a unique novel and are not overly fussy with grammar like me, give this novel a shot! It deserves it.

All aboard the tentacle bath

Reviewed at: Not a chapter - Little piece of information 2

This a fiction featuring a wide variety of characters and settings, with a focus on the darker side of things.

Grammar
First to get the obvious out of the way: English is not the native language of the author, and this shows quite clearly from the start. As a result, it can sometimes be hard to follow, and many will likely be put off by this fact.

Most of the errors can be chalked up to that, but there are still a few that I'm sure the author could fix with another read through.

One thing that stands out is the use of spaces before question marks and exclamation marks. This has been pointed out by a commenter, but not fixed yet. Even if you disagree with another language's rules, you have to obey them when writing in it.

Style
I found the author's style to be quite engaging. It is quite tense throughout, and the use of asides by the mysterious narrating entity really add that extra bit of excitement.
One detracting aspect is the occasional use of separate consecutive lines of dialogue from a single character. Combining these would be preferable for ease of reading.

Story
The themes are a bit dark, with elements of body horror and other things that might disagree with some readers. I had no issues with any of it, as I think it all fits with the interesting setting the author has chosen.
I mean, reborn into a new world as a lone zerg-like alien creature, who wouldn't want that? The tentacle bath might take some getting used to though.

Character
This story features a lot of different POVs. They all seem plenty different enough, and have their own reasons for being in the story, as well as different ways of speaking.
I would have been fine with a single chacater only (the first one introduced), but that just isn't the story being told.

Overall
Past the less than stellar grammar is an interesting and unusual (in a good way) tale waiting to be disovered. Give it a try!

Reviewed at: 22 - Healing and Changing ; You know It really look like a scam, Right ?

The multiple POV is by far my most favorite  part of the story ot gives breathing room for the characters. Unlike other stories the POV are from different settings (from sifi to medivial fantasy) and using the litRPG elements to connect them. All the mc are at least likeable that reading about them does not feel like a chore with Eleonor hogging most of the chapters. The story on the whole  is good. I liked reading the story and I feel like it is one of the better ones in royal road