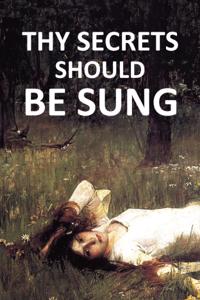 Thy Secrets Should Be Sung

Once upon a time, a Dark Knight abducts a beautiful Princess and carries her away to an enchanted garden, desperate to win her hand. He’s absolutely convinced that only the love of a good woman can save his poor, woebegotten soul.

Ha! What a tired cliché! Unfortunately for the Knight, the Princess is far from a helpless damsel in distress or easily beguiled maiden, and as the Knight attempts to woo her, she in turn, works her own agenda.

It's extraordinarily rare to find an unknown work of such quality on this site.  The search for such diamonds in the rough inevitably lead to finding many, many pebbles. This is no mere pebble.

In a fit of irony, I want to sing praises upon the unknown beauty that is Thy Secrets Should Be Sung. This quality simply should not appear on this site. Given how I usually review material on Royal Road (which is a bit on the harsh side), I need a seven star scale to work with here.

Style: 7/7.  The author is masterful on this point, though I will mention only a few points.

Second, the author does a wonderful job of the characters moving between the different formal and informal modes of speech. I would normally support this with further detail, but I will simply leave this point as conclusory.

Story (6/7): The story is a character-driven extended dialogue between the Dark Knight and the kidnapped Princess. He woos her, she refuses him. But these are not children nor simpleton, and their interactions are beguiling.  To be clear though, this is not a work meant to be binge-read in a single-sitting.  That is not to say that it is difficult to understand; rather the emotions evoked in the reader are so strong that the reader simply must rest.

I docked a star for two reasons. First, it is implied in the last two chapters that Rosemary is a refugee from the (literal) collapse of the Greek Pantheon.  This seems to be a very important point for the climax in the last chapter, and yet it's sudden appearance so late in the story makes it feel a litlte hamhanded.  Perhaps it is foreshadowed earlier in some of the references to classical works and myths, but if so, I missed it.

Second, in the last chapter, the Dark Knight is revealed to be, not only a woman, but a former Princess herself. This is odd in so much as there was no foreshadowing whatsoever that I could find on this.  It's a surprise, but a disconcerting one and it doesn't work.  On the one hand, leaving the Dark Knight as male would have worked perfectly fine and the story would not be lesser for it, the Dark Knight having learned the importance of if you love something, set it free.  On the other hand, the story would also have worked if the Dark Knight had been portrayed as female from the beginning, and so I'm left to ponder (without answer) why the author hid this from us.  The only explanation I can come up with (which is very likely wrong), is that the author did not want to address lesbianism within the story and, by leaving the reveal for the end, there was literally no space to do so.  This also meant that while I had some reservations about the sexism intrinsic in the interactions between medieval knight and princess, I am now utterly baffled about whether or not I feel weird about it.

Character: 7/7.  In so much as the point of the story is to explore these characters, and, to a lesser extent, their development, I have nothing to say here.

Well, I first of need to say I don't read too much like this. It just feels like the old texts that I would be forced to read during my younger years by teachers that couldn't help but swoon around some old guy that lived 300 years ago.

If that didn't make sense to anybody, I won't fault them for the confusion. It is very hard to nail down what I truly think about this fiction. Its style is something that fits the dramatic theme very well, all the characters speaking like it's some ancient play by a certain person that I utterly detest(if you remove the fact that these people are actually using sentences that can be read easily).

Overall, I would say this is good enough. Story is a bit abstract, the way they talk might cause initial confusion, and the grammar is alright. Conversations get halted quite often but that's just more nitpicky than-

This is a lovely, relaxed sequence of distinct scenes, each a worthy short story in and of itself, but weaving subtly together into a tapestry of words such as I fail to properly describe. It is eloquent and quaint, simple and beautiful, old-fashioned and timeless.

Delightful, soft, and unwavering, the style is one of this story's many strong suits. The interweaving of action and dialogue is exquisitely done, perfectly matching the tone of the work, and I can find no fault with it.

Grammar, while excellent, is flawed in some instances. Specifically, quite a few homophones have slipped through, which do distract jarringly from the otherwise perfect prose. This is the only thing holding it back from a perfect score.

The story is simple in conceit, but layered and unfolds delicately across the chapters. The characters are multi-faceted and well considered.

I must confess I haven't finished the story yet, as it feels best served unfolding a chapter at a time, with space to breathe; taken as a sequence and not as a single thing to rush through. I've been so impressed with it so far I feel compelled to write this recommendation as soon as possible. It is also possible that, like so many other stories, it could fail to stick the landing. But I'm not sure that would really matter when the journey has been so utterly enjoyable.

This is a story that is Romantic with a Capital R. It feels like it was written in the 1800s, style and references. (And it's a relief to learn that this was intentional! I felt so nervous reading this at first.)

I thoroughly enjoyed the crisp, polished feel this tale weaves. It felt like something I would be assigned to study back in college, and while I would not have appreciated all the work that went into this back then, all the things I read in college allow me to appreciate the intricate details of this story now.

If you're not well read in the famous English staples, the bits and baubles that should be appreciated might be missed. It's still beautifully crafted.

The characters are consistent, the tone balanced. It has a slower pace, where the action is in dialogue rather than prose. That's a style that's very, very on-brand for this type of story. It's not for everyone, and normally not even for me--but my goodness was the quality of writing wonderful.

I give an overall score of 5* because this story deserves it.

If there's a way the author thinks of making this story more approachable to people that aren't well-versed in Romantic literature and Greek myths, I think that would be a worthy endeavor!