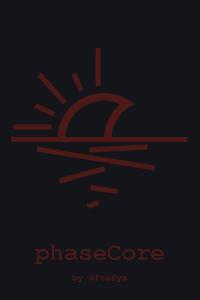 The ocean wave crushing above my head sent me awake.

Grunting and rolling on the side, I noted that the place I found myself in was decidedly not my own bed or even my home. Dreamlike haze had yet to find its way out of my head, and thoughts rolled around slowly and unwillingly, like marbles through the wet dirt, colliding into each other and bringing one another to the forefront of my awareness.

"Did Alf drive me on the beach as a prank?"

"Also, what kind of prank would that even be?"

I forced myself to stand up. The beach seemed to be pretty ordinary, a gravel-and-shells kind, not a sand kind. The lighting had a red tint, like a byproduct of the sunset or dawn. Turning to the sea, in the direction where the source of the light would presumably be, I lost any remnants of sleep and became vividly aware of the following three facts.

"What the fuck," I muttered under my breath.

The sun sat perfectly halfway through the horizon. About one fourth of it was hidden behind what I could only assume was the moon. The sea appeared crimson with how the light was reflecting off its surface.

"Let's go over the possible scenarios," I thought, "in order of decreasing probability. First one: someone drove me for like 10 hours just to leave me on the beach and I have somehow missed the notice about the eclipse. You know it's good when that's the most likely option. Second one: I'm having an extremely lucid dream unlike any other I've ever had in my entire life and... fucking hell, you're stalling, Vell. Obviously, you're in another world. Then again, I don't really remember falling under any kind of trucks or making contracts with gods and/or demons."

I was so busy processing the situation I found myself in, that it took a gust of cold wind and the goosebumps that came with it to make me realize that I'm completely naked.

"Nothing to do about it right now, I suppose, but if it's sunset, objective number one is to find something to cover myself with. Right now it feels fine, but in the night it will probably get colder. I fell asleep in my clothes, though. No physical items can be carried between worlds? What counts as one? Actually, let's see."

I prodded my back teeth with my tongue in the place where the dental filling was supposed to be. It was still there.

"I'm just going to assume that everything not "easily detachable" is still in place and I don't need to worry about stomach acid disappearing forever or something like that. Not that I would've been able to fix it somehow in any case."

Thinking about all of that ultimately pointless bullshit, I made a beeline to the left over the shore, seeking for a way to get on the firm land, looking forward to stop torturing my bare feet with gravel. As I approached the edge of a shore, I've noticed a man looking around.

I waved at him, trying to get his attention, disregarding the embarrassment that nudity caused me to feel. The chance at getting the confirmation on my situation, some clothes, direction to the nearest gathering of people and maybe some general advice took priority.

He started to shorten the distance between him and me, as I realized 1) he was looking for me and 2) he actually speaks English for some bizarre reason.

"Welcome to Yav," he smiled widely.

That confirmed that either I was transported to another world or I'm really shit and geography - I don't remember any place with that name in my world. Or that he's in on the prank and he's bullshitting me - that would certainly explain him speaking English. That being said, it was harder and harder to entertain any notion except for the other world scenario. I couldn't even begin to imagine what it would take to fake something like a cooky sun of this world.

I took in his appearance. The baggy jacket with rolled up sleeves hid something similar to a chestplate. The similarly baggy pants implied some protection down there as well. A middle-sided bag hanged on his shoulder. The dark, greasy hair of his was tugged in a ponytail. There was one small scar on the chin and one on a left brow.

Before I could make any inferences from that, he interrupted my stream of thought.

"I'm sure you have a lot of questions," he said.

"Uh. First of all, do you have any spare clothes? Second, how did you know I would be here? You were obviously looking for me, so you had to know somehow. Is it a common occurrence for people to just appear in this world? Or, god forbid, is there some prophesy about..."

"What world are you from? Does the sky there look like that?" he pointed at the weird sun of this world. I noted the scar around his finger that I've missed before.

I couldn't finish the sentence before I felt a sharp pain in my head and then nothing.

The screen shined in the dark, taking away all the detail from my room. I was slouching on the coach with my sis, watching a trashy isekai show.

"Assume that one day Truck-kun comes for your soul," she said, "what would you do, when you end up in another world?"

"Probably perish, either instantly or within a year," I shrugged, "There is any number of possible danger vectors glossed over in shows like this. Let's imagine an actually different world. Even if the same fundamental principles of physics and such apply, there's no reason to think the atmosphere would be breathable for an otherworldly creature, or the pressure would..."

"Wait," she interrupted, "you're approaching this as if you would get transported to a completely random world. Usually, if you're summoned, you're somewhat tailored to the purpose of the summon, aren't you? It's reasonable to suppose the world you're summoned to would be very similar to yours."

"Fair enough. Even then, even in a very similar world, developing independently from my own, all sorts of important things would go differently, like the evolution of bacteria or viruses. Generally, most of the edible food might not sit well with me in a new world. Like lactose intolerance, but for everything due to me not being a product of evolution in the same ecosystem."

I cleared the throat.

"Barring the biological problems, there are cultural ones. The problem of language usually gets handwaved away - there is rarely a good reason for the inhabitants of another world to speak English, and even if they do, knowing absolutely nothing of their culture would lead to the endless faux pas galore, and depending on how violent the culture is, I would either be ridiculed, jailed or executed. Even if all of those problems go away, people aren't summoned around to do accounting. Do I look like someone who would survive the first encounter?"

"That's all so lame. Don't you want to just imagine yourself conquering the whole new world, using only your wit, trusty companions, numbers going up and a conveniently rare and overpowered ability?"

"Sure," I sighed, "but there's always a tiny voice in the back of my head saying 'it wouldn't work like that and you know it'".

I woke up for the second time today, this time with my hands tied and my face pressed to the gravel hard with the boot.

"I said stand up," the man said irritably.

"What is even the point of all of this? Do I look like I would run?"

"Shut up. Get on your feet and let's get moving."

The red ambience the sun gave to the surroundings was still there, but it became significantly darker. Making one step after another trying not to trip over a rock I didn't notice, with an occasional shove and a profanity from my captor, my only thought was that I wouldn't really mind an overpowered ability manifesting itself right about now.

We left the shore and made our way through the fairly shoddy road that evidently haven't seen much use. You'd see something like that at the outskirts of a bumfuck village in the middle of nowhere, not near any big town - the car wouldn't be able to drive through here. Or a horse, or whatever they used instead of horse - I still had no idea about neither the technological level of this world's civilization nor the local fauna.

"Where are you taking me?"

"If you didn't want me to talk, why didn't you put a gag in my mouth, you fucking idiot?"

After what felt like eternity of mindless waddling, the scenery changed a bit. Road took a turn to the right and widened a bit, and the rare exhibits of bushes and trees turned into the forest to the left of the road.

A faint whistle emerged from somewhere in the forest.

"The fuck? There isn't supposed to be any..." the man behind me grunted, stopping mid sentence.

The next things I heard were the hiss of an arrow and a thud. I bolted to the ground, covering the head with my hands, as if it would change anything if the archer chose to shoot me as well. Turning my head around, I saw a body on the ground with an arrow going straight through its eyesocket. The blood flowing out of the wound slowly, but surely made a puddle.

"Hey! You're the new phaser, right?" someone exclaimed from the woods, "You can stand up now, I'm not going to shoot you."

The girl with a short hair and a bow approached. She gave me a look, her eyes lingering for about half a second longer than necessary below my waist.

The corner of her mouth twitched, as if suppressing a smile.

I felt my face turn red, and I could only hope the ambient lighting would make it less noticeable.

Thanks to Crop Harvester for pointing out some grammatical oddities.