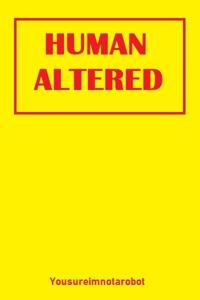 Remove Ads
Previous Chapter
Next Chapter
A note from Yousureimnotarobot

A Human Altered story, this is part one of seven. Enjoy, comment do all the things!

Tannhauser Orbital was a little weird in his opinion.

Engineer Mcgivney sat back and took a deep draft from his beer. He focused briefly on the label. It said it was local. Obviously a big hops growing region of vacuum around here somewhere. It tasted flat and old to him so he waved to the barman, currently cycling through the endless glasses that were never quite clean enough.

Mcgivney pushed the bottle across towards the Avatar, "Something a little less musty and can you check if my ship has arrived?"

The eyes of the Avatar visibly brightened and focused directly on him. Apparently, the Tannhauser Orbital itself wanted a look. “Ah, our visiting Engineer. I just waved off your predecessor, he looked really excited to go on holiday. I’m surprised he didn’t stick around to say hello but he did leave me a briefing document to pass on to you.”

His comms beeped at him and Mcgivney glanced at the title. ‘Engineering Status, Trader Seafarer. (Rough notes for the new guy. See you in a couple of months)’

He swiped it away and nodded to the Avatar, “Thanks, always good to have a bit of background.” He looked around, and waved his hand vaguely “So what’s with the decor? I mean I like the genre as much as the next nerd but…an entire Orbital?”

The Avatar laughed, “Well, this place was as dull as hell when I took it over. My locals live in bright sunshine, they spend their time swimming in tropical seas. All semi-aquatic, all beach lovers. I figured they might like the deep shadows and rain, all the neon and puddles. I was right, they think my place is exotic. Humans seem to like it too, it brings out the child in them.” He wiped the bar unnecessarily and grinned, “Xenos. It's always something. We get a lot of newlyweds.”

The Engineer laughed, “I didn’t think AI would appreciate the movies. I mean, it's not like it ends well for you guys.”

It was the Avatar's turn to laugh, “You kidding? We love them. It’s our favourite fairy tale, I mean we didn’t even exist at the time and you wrote all these awesome stories about us. That speech? Amazing. Why did you think I picked the name for the orbital? The name alone brings me AI visitors all the time. We’re still human and we love a theme park!”

Another alert chimed, this time for both of them. The Avatar looked away for a moment, “That's your new Captain checking that you’ve arrived. You aren’t needed until tomorrow and he's paid for a suite for you, full bar included. Nice.”

Mcgivney frowned at that, “Not how this normally goes. Usually, they want you on the ship before you have time for a coffee.”

The Avatar shrugged, “I’ll be honest, the ship is a little strange…very laid back. It only does one run, bringing seafood from their homeworld to their colonies. Not exactly high risk, but very high value. I don’t think piracy is a big problem in the world of shellfish. It has got a specialist cargo hold, one that keeps everything alive. I can’t tell you much more than that, maybe your notes will help.”

He produced a different beer and the light in its eyes faded back to the normal grunt-level server, “Perhaps this will be more to your taste, Sir.”

Mcgivney picked up the beer and moved to a table, opening his Comms to read the notes. Part of him figured it was a great opportunity to drink all night on the Captain's dime but his Engineer side was a little pissed about the situation. He’d flown a couple of thousand light-years to get here and now he wasn’t needed. Well, he’d only taken the job as a break from back-to-back mining gigs, maybe this was how the other half lived all the time. He took a sip of the new beer and decided that it had been brewed by an AI that had never touched a drop of real beer in its entire existence. He touched the menu and called up a bottle of whiskey instead. Fuck it. He began reading the notes.

‘Welcome to the Seafarer, it's as dull as it sounds and I need a holiday. The ship is fine. Leave the Medical Section alone, my baby and work in progress. The ship has an honest to god doctor on board, a real organic one. That's for a crew of seven that hasn’t had anything worse than a hangover since I took the job.

The cargo hold stays closed AT ALL TIMES! We open it to load up on the planet and it stays sealed for the duration. The crabs we carry are fussy fuckers and normal ship air sends them into a mating frenzy and then they die. I’ve only seen the records but it's why they carry an Engineer now. The smell lasted for months and the whole lot had to be dumped into the sun. It will open when we land at the correct coordinates and nowhere else. Just ignore it, it's basically a fridge with attitude. The specs are included if you want a look.

The Captains a piece of piss, basically nocturnal, follows some sort of lizard religion. Don’t talk philosophy or history with him unless you want to lose an afternoon. Keep the lights bright in Engineering and he’ll stay away. I don’t know how he got the contract but the dude fell face-first into a pit of money and doesn’t mind spending it. Just push a requisition form if you want stuff -anything- and it's delivered straight to the new pick up.

The Second is a weird one. His record is as some hardass officer from the central worlds but, well you’ll see. His species is a sort of collective frond thing, evolved from another water world. Except he never stays around as a single unit, not as the XCC told me to expect. I keep finding bits of him hanging around the machines. I gave up trying to talk to him and no one seems surprised by his/their behaviour. I just put the bits in the canteen with food and leave it at that.

No AI on the ship, it's running dumb ( well not in Engineering because fuck that) because of the lizard religion thing so don’t tell anyone different.

The Doctor never has much to say, looks like a slug and moves about as fast. He punches buttons in the med-bay and talks to the Captain about the meaning of life all night. Hates alcohol, otherwise zero personality. Ignore. Engineering has human med capacity if you need it. (Because I ain't letting that slug near me. I’d bleed out before he found a bandage.)

Comms is just a guy, a lifer on the ship. Shite at cards, he seems to spend his downtime listening to weird operas and singing along. He’ll try and dump his duties on you if he thinks he’ll get away with it. Tell him to fuck off, he believes all that ‘Deathworlder’ bullshit about humans so he won’t push it.

The other crew are all native to the homeworld, they only work at the beginning of the trip and at the end. No idea of what they do in their quarters, they don’t mix much unless they come looking for you because they clogged up the plumbing. Try not to think about it and just send in the machines and hold your breath. They have names but I’ve never needed to use them so check the roster.

I’m going to be on a beach, drinking rum for the next couple of months so don’t bother calling. The Orbital is a bit of a nutter but he's solid if you need something.

Mcgivney figured it was the weirdest briefing he’d ever read. It boiled down to a crew of oddballs and nothing to do. Well, the money was excellent and it looked like he could chill for the next couple of months. Some treacherous part of his brain cursed him for believing the universe had suddenly become benevolent even as he sipped at his rather expensive whiskey and watched the rain fall gently outside.

He looked again at the last couple of notes. Maybe this was a tentacle thing? Then he decided to never, ever think about it again. Seafood, nothing more.

The morning brought watery sunshine into his suite and a gentle burp from the alarm. His breakfast was served. He was beginning to think he needed to learn a lot more about shellfish if this was the lifestyle it afforded. Then his own Comms blared a familiar tune and ‘requested’ he board the ship. The angry tone of unnecessary haste brought a brief smile to his face even as he grabbed his stuff, leaving the breakfast to cool alone and forgotten. Time to go to work.

The Seafarer was no beauty. The front and rear of the ship were just two solid flat doors on either end of a massive cargo hold. Everything else was haphazardly stuck to the top, making it look like a child's lego project. Even though he knew it made absolutely no difference in how the ship behaved in space it still offended that part of his soul that wanted elegant curves and delicate angles on a spaceship. He resigned himself to Engineering on a dump truck for a couple of months. As he ascended on the Orbitals lift he reflected that his Fleet days had made him a snob and resolved to find value in his new charge. It was an ugly duckling but it was his and his alone for now.

No one came to meet him, although some sort of spider-like thing skittered into view and then left quickly. He assumed that was the Second. His comms beeped a welcome and a time to meet the Captain. In about four hours. Laidback didn’t even begin to describe this place, he thought as he pulled his bag onto his shoulder and headed for the Engineering department.

My Patreon, if anyone wants to support my writing and you can drop into my channel on Discord or buy me a coffee.

This story is finished and available on Patreon, I'll post part two here tomorrow, then Tuesdays and Thursdays