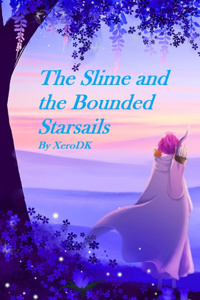 The Slime and the Bounded Starsails

Remove Ads
Previous Chapter
Next Chapter
A note from XeroDK

I see that you've made it past the prologue. I want to thank you for sticking with me and I hope you enjoy the rest of the story. My fiction, that you are all clearly enjoying, is a slow-paced character-driven piece with a beginning, middle, and end. And so, there's no endlessness or web-story format that will inevitably disappoint you into quitting somewhere in between. If you're going to quit, you'll find plenty of reasons in the story developments. Also, since there are story developments, this isn't a slice-of-life series. If I don't read another generic slice-of-life story for the rest of my life, it'll be too soon.

Well, the point is, if you're here for the wacky-ness of the gender bender tag or the path to OPness in Isekai, turn back now. If you want a good character-driven story filled with themes for the average and not-so-average young adult audience, you've come to the right place! On that note, this story does feature some tropes that I hoped to make better but you'll have to read that in the story!

My release schedule isn't fixed but I'm going to try to upload every week and try to get through the material we've already gone through in my previous version of this story as soon as possible.

The boy’s life never had much meaning, mostly because his life never started. His parents never gave much love to him. He was socially awkward and had few friends. He wished death upon many classmates who bullied him. He knew it was bad of him to think so but he didn’t care.

His life was miserable and was cursed from the second he was born. People around him never understood or tried to understand his mental issues. Attempting to have an adult conversation with adults when he was a child was useless when no one believed his issues were real. Words from a child never amounted to much.

He found that the people who wanted to present themselves as understanding and tolerant were mostly ignorant and prejudice while patting themselves on the back at how righteous they were. It was all too much for him.

To be fair, his parents and siblings didn’t know how to handle someone like him. Their neglect was brought by their fake smiles of understanding while snickering. He never asked to be born differently. Was the world playing a cruel joke on him?

It was too much for the boy. Being constantly told he was wrong, told he was sick and told he needed fixing. And so, he ran away from home briefly at the age of nine.

Why couldn’t he have been born normal?

It was a question that plagued him. The boy wanted to change his situation so he worked hard to study and invest his time in self-improvement. During his years in high school, he spent time in college programs and began to work towards a career in medicine.

Seven more years of misery and hoping for a better future were shattered suddenly. Before he knew what happened, his life was over.

Perhaps it was true about what people said about their life flashing before the eyes of those who were dying. Whether it be divine intervention or the hallucinations of an oxygen-deprived brain, the result was the same.

If the boy ever believed in a god, now was the time. He prayed that his death would come sooner as the people around him seemed to surround his mangled and bloodied body.

The exercise of a dying person was short for the young boy named Cayden. There was little to reflect on. He fully accepted the hopeless situation of life and death then prepared for his rest.

He had a hard life and now that it ended, it was time to let go. That relief gave him the last happiness he would ever have in the world he inhabited for all his life.

It was odd to him, though, that anyone would be satisfied with just one world. Before the invention of the railroad, people didn’t leave a hundred miles from where they were born. Ironically, after the invention of the internet, many people felt they could experience a lot of life from their phones or computers. Similarly, there were stars in the sky, land yet unreached and the people of Earth die in this age without stepping on another planet.

Of course, he knew of plenty of volunteers that would jump on the opportunity to visit space but that wasn’t his point. Anyone can experience something. It was another matter to live in it.

His life came to an end because of experiences he had yet fulfilled and now he accepted that his dreams would never come true. He recognized his selfishness. He never asked for much but at least grant him that life yearned. The life he worked hard for. To live his life the way he wanted was all he ever asked for.

The next moment, the boy saw a light. Heaven’s doors? Or was it Hell’s gates?

No…it was a vision. A vision of a planet. The terra forming the continents were in an unfamiliar shape to him. An Earth-like planet? The stars looked so beautiful from up here. Somehow, his disembodied consciousness turned his field of view to a spaceship. It was definitely some sort of space vehicle because of its thrusters in the back. The vessel had many lights to it, possibly from windows.

This had to be a dream, he thought. This was a dream from a dying kid and it was so vivid. If he still was alive than he had to wake up!

He awoke, somehow. However, he still felt disembodied.

However, unlike previously, his vision improved.

Immediately, he felt something was terribly wrong. The three-sixty sight was something his human brain couldn’t comprehend. It was as if he had eyes all around his head, seeing through his own body and through walls. He tried to move and thrash around but he couldn’t. He couldn’t move.

He sat at the same spot for a few hours. His mind simply went blank. The situation was far too incomprehensible for his mind to process. Was this limbo? Was this real?

He finally snapped out of his trance and acknowledged the space around him and his present body. His body was a slime. A green slime like in an RPG game or something similar.

Did he reincarnate or was this the afterlife? Questions for later.

With his three-sixty view, he could see a vast distance if he concentrated. He could also shift his perspective to outside his body and to as far as he could see with his new vision. The slime was in a misty and damp cave of some sort. There was a small light in the distance so he couldn’t be far from the surface. The slime was born here a short time ago.

He witnessed some live births of his new brethren. The water and other sticky substances gathered in a pool, spawning a new slime every minute or so. Immediately after birth, they learned to move by instinct, an instinct he apparently lacked.

Slimes of different shades of green and blue were here moving around aimlessly. It was then he realized he could see in the dark and distinguish between different colors. It seemed that his vision didn’t depend on reflected light. It was like an advanced night vision.

He observed the other slimes for a while and learned that slimes moved by shifting their weight. Since a slime was basically a sack of slime, it had no upright orientation and could move like a cell against a surface. There were some cells in an animal’s body that can move by moving its membrane across other membrane surfaces, immune cells for example. With this idea in mind, he attempted to move.

His slime body rolled over a few centimeters.

Progress! He could move!

He began practicing in a circle and shifted his weight up and down to jump. However, after a series of jumps, his body went splat on the floor. His body shape collapsed and he was nothing but a puddle. The slime understood now, not only was he born from this stuff, but he also needed to eat it off the cave surfaces in order to maintain his energy. Jumping up and down must have expended the little energy he had. Now, the other slimes saw his weakness and came rushing towards him.

Ah! Since he was a puddle of slime nutrients, the other slimes were coming to absorb him! He needed to reform quickly or else he’ll lose his body.

A small green bipyramidal crystal that came from his body laid on top of his puddle. He didn’t notice the crystal while it was in his body since it blended in so well with his color. Now that he got a good look at it, this crystal could be his true form. Even though his body was splattered across the ground, his three-sixty vision was centered around the crystal.

He had no time to think, he was moments away from his body becoming slime food! He didn’t know if he needed his slime to stay alive but it was better than being even more disembodied!

He concentrated and attempted to pull himself together. A light then shined from his crystal in the form of a varied pattern of lines that extended into his slime. The shape of veins glowed throughout his slime as his slime moved and consumed his crystal. He was back together again.

The slimes stopped their advance and started to aimlessly wander again. He didn’t know if he needed air, but if he did, he’d breathe a sigh of relief.

The reason he was able to reform his body so fast was probably because of the flop he did. His body was spread out, covered more surface area and passively absorbed the slimy nutrients in his area quickly and so he was able to regain his energy in time.

To avoid another incident, he decided to move away from the spawning pool where thousands of slimes were still wandering about. Throughout his limited time jumping and moving, he found his sense of gravity and balance so he could orientate himself relative to the world. Wanting to see what the outside world looked like. He headed upward towards the light he saw.

I tend to write things with purpose and follow the convention of writing a gun into the story to use it. Small sentiences can have greater meanings in the future which adds re-readability.

Support "The Slime and the Bounded Starsails"