Hello all!  This chapter is not part of the story, but a place to try and answer some questions that have been cropping up.

I’ve gotten a lot of requests for a map of my world, particularly after I had Domenic giving Redmund a geography lesson. The inspiration for my map is a picture of the globe with Antarctica centered, giving a perspective of our world where our oceans are the focus. I thought “that would be a great world for an ocean-centric story” and put it in the back shelf of my mind until I started brainstorming Seaborn.

I used that map for my own reference. I couldn’t find out who first printed it or if there is a copyright on the original image, so I’ll say that the original picture does not belong to me.

The picture I’m sharing here is … well, I hesitate to take ownership of it. Let’s just say that my artistic talents don’t extend beyond writing, shall we? Anyway, this is the (very rough) sketch of the world I’ve been keeping things straight with. 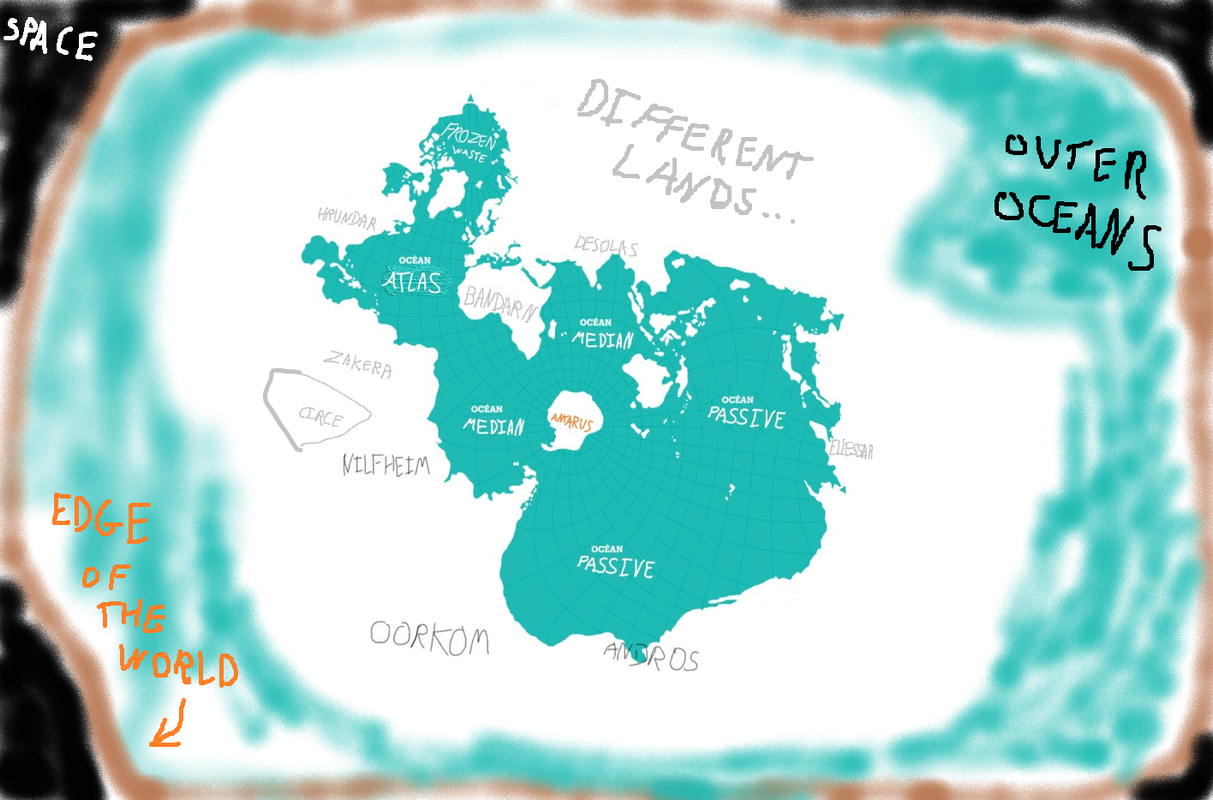 I also want to address the first major continuity error that came up. I do my best to avoid these, but this story is practice for my editorial skills as much as anything else.

In chapter 2 Domenic said he had two levels in Trading. I intended to let him have a low-level trade skill from his travels. When I got to chapter 17 and had him trading, I referenced my spreadsheet of Domenic’s abilities to make sure I had his level right.

And he had no Trade skill listed.

I realized throughout the story I’d been sharing Domenic’s stats without a Trade skill. I looked for where I’d mentioned it earlier, and missed the only reference I’d made in chapter 2. I thought I’d just forgotten to mention trade early on. So I wrote in an excuse in chapter 17 for him learning the skill. Boom! Continuity error.

Now I’ll be asking you all what you think the best way to fix it would be: go back to chapter 2 and correct the reference? Or re-write the scene in chapter 17? I haven’t tried doing a poll on this site yet, so this will be an experiment!

I’ve also been given suggestions that the Trade skill doesn’t need to be listed on his stats, since I’ve established that not every minute skill that’s learned is listed. Is that a reason you all would believe? Let me know your thoughts in the comments!

Finally, there’s the subject of Patreon. I’ll admit, I never expected to have so many messages in my inbox asking if I planned to put one up. I never assumed my story would get the kind of traction where people wanted to me out as an author or get advanced chapters a little quicker.

I’ve decided to give Patreon a shot. It’ll be a bit of an experiment, as I’ve never set one up before and I’m not sure on your expectations for it. I uploaded all my current material to my page, and will keep updating my Patreon as I write. These chapters will include things that I usually change or edit before posting to RR (I’m always going back and adjusting things) so there will likely be minor differences between the first Patreon material and the RR post. (I imagine people will also point out continuity errors like that Trade skill thing before I post, so hopefully RR gets a more refined product!)

Patreon suggests creators make tiers of patrons for different levels of exclusive content. My advance chapters were the only benefit I felt comfortable doing right now, so I eliminated the higher cost tiers. The only tier to be a patron is currently set at $3. I have no idea if that’s dirt cheap or more than people are willing to give for advance chapters on an unfinished story, but I’m sure you all will let me know! 😊

So if you don’t want to wait to read about Domenic learning the basics of magic, check out my new Patreon!