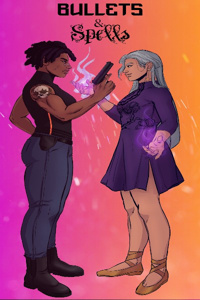 We explored the rest of the office building and found more traces of the informal settlement, but no one else is currently living there. With the amount of useful and sentimentally valuable things adding up my suspicions form into a question.

“Is it possible to make a virus with magic?” I ask while examining a food wrapper. I saw a few like this one in this building. They aren’t brands I recognize: Banna-Bites, Know-Me Meatsticks, Bola-Bola Buns. The wrappers are cheaply made.

“It’s possible to do anything with magic,” she reiterates for me. “It would require a good understanding of virology, a high level of magical articulation,” she ponders aloud. “But it could be easily countered by another magician,” she points out.

“What about a bunch of homeless humans who don’t know magic exists?”

I can see the point I’m trying to make click in her head.

“You think the necromancer killed these people?” she asks.

“You said that they could be perfecting their method. Why wait for people to die, when they could speed up the process?” I find another of the wrappers. “If a dozen or so homeless people die from a virus, it’s not going to raise too many eyebrows. This could be a way of speeding up whatever the fuck they’re planning.” I come across a toothbrush and toothpaste in a sandwich bag. “A lot of the stuff here is useful, it’s not stuff they’d leave behind. I think everyone who was living here died.”

“And everyone else would be too scared to come in here,” Witch-Hazel adds. “So they could come and do what they want without being disturbed...Gods and Goddesses.”

“I think this food is how they did it,” I note. Taking out my phone, I search the names of these snacks and nothing turns up. “I’ve never heard of these, and the internet hasn’t either.” I drop the wrapper. “This necromancer might’ve made these, put a virus in ‘em, and waited for it to do its job.”

I look around again, but the more I see the more it unsettles me.

“I don’t know if it’ll help, but I’m gonna put out more feelers to catch this monster; but Hazel, what are we walking into?”

The witch shakes her head and claps dust off her hands.

“The only reason that I can imagine someone would need to reanimate this many dead people is to make an army,” she answers.

“And with the lengths they’ve gone through, it’s probably to ambush or invade something. They might have beef with one of your... what did you call your magic cities again?”

“Right. They could be building this army to invade one of them. Hopefully,” I add.

“I think your magic cities have a better chance of understanding and surviving this rather than Oleander City,” I explain. “This place is shitty enough without a horde of the undead running through the streets.”

“Do your arcaniums have defenses? Like guards or something?”

“We have sorcerers, I would compare them to your cops but they’re actually useful and help people.”

I laugh a bit.

“You think they could handle this?” I ask while heading to the stairs.

“Depends on the arcanium, and how fast they could respond,” Witch-Hazel answers, following me. “Is there something you’re trying to say?” She catches what I’m leading to.

“I’m not saying that I want us to die getting this creep, or fail to find them, but every plan needs realistic pessimism. If” I stress “we can’t stop this guy, is there someone else who can?”

I go down a flight of stairs before I realize Witch-Hazel isn’t following me. I look back at her, she has a curious look on her face. She’s examining me.

“Would it really be so painful for you to be more hopeful?” She asks.

The Witch tilts her head a bit and I suck my teeth at my corny addendum.

“C’mon, there’s nothing else for us here.”

The Witch obliges and we exit the office building. It seems all it’s good for is death.

We get back to the car and in the miserable heat, I ask an important question.

“Wanna get some ice cream?”

“There’s gotta be an ice cream truck around here, right?” Hollyhock says while whipping around a corner.

“Nah, when it’s hot like this, you need a cone in your hand immediately.”

“You’re just making stuff up as you go along.”

“That’s what everybody does. Oh, shit, there’s one!” She maneuvers the car and parks behind the truck. “I want a waffle cone, with chocolate,” she says while getting out of the car. There’s a group of small children, they’re producing coins from their pockets and counting them.

“We’re tryin’ see how much money we have,” one of them answers.

“I ain’t ask if you had money, I asked if you wanted ice cream.” With that, she takes out a couple of hundred dollar bills and hands them to the man in the truck. “Let ‘em get whatever they want,” she says to him. The kids flock to the truck and her.

“Hey, this lady’s buying us ice cream!” A kid screams.

Other phrases of acknowledgment ring out in the area. The crowd around her gets bigger. Kids hurry to make their pick and the man in the truck rushes to get them. Hollyhock haunches down to hear what a particularly short kid has to say. She then picks her up so she can see the menu. That’s when I see it.

A rare, genuine smile stretches wide across the assassin’s face. She’s swarmed by kids and couldn’t look more in her element. Rather than the cold, unfeeling person, she claims to be, here is the woman who cares about others. Who spares people trying to rob her, whose heart breaks for the dead, and buys ice cream for a bunch of kids on a hot day.

There is a light in her eyes I haven’t seen before.

This is a side of herself she either ignores or isn’t aware of.

When the crowd of kids all have their ice cream they wave goodbye to Hollyhock and she waves back to them. She gets her ice cream and picks the same for me. We lean against the car while enjoying our cold treats.

“Nothing like ice cream to spread some joy,” she says. She takes a small bite out of the cone.

‘Would she let me say she’s cute? Or would she deflect it?’ The assassin catches me looking at her.

“What?” She asks, a small smile remains on her face.

“Nothing, nothing at all.”

“Doesn’t seem like nothing,” she notes. I catch her eyes flit down to look at my lips. I’ve caught her doing it before.

“Eat your ice cream,” I reply, nudging her in the shoulder. “Who knows when you know who will strike again?”

“Hopefully not today, I’m about to knock. It’s too damn hot to be running around, looking for dead bodies. How does that creep do it?”

She doesn’t seem too concerned that anyone might overhear our conversation.

“They’re probably using climate magic. You use it in a large area or localize it around yourself to control the temperature.”

“How come you don’t use it?” The assassin takes a mouthful of ice cream, getting some on her nose. I shake my head a bit.

“Too much work.” It’s a good half of the full reason. Hollyhock uses her pinky to clean her nose and then licks her fingertip.

‘Gods and Goddesses, her lips look so kissable.’

The ice cream truck drives off and with it, the shade that kept us a little cooler. We chat and finish our ice cream before it melts.

“Think this day will throw another curveball?”

“You think this day will have any other unexpected surprises?”

“You’re starting to get me tight,” she says. “Aight, let’s-” her phone buzzes in her pocket. “Speak of the devil.” She doesn’t finish the saying and answers the device. “What’s up?”

“Hollyhock, I’m in a situation, need your help ASAP,” the voice I recognize to be Larkspur says on the other end.

“Ping your location, I’ll be there stat,” Hollyhock says with no hesitation. “Can you stay on the line and give me some details?”

“Bring some heat with you.”

How crazy would it be if the ice cream truck driver was the necromancer? Also, can you guess what those wrapper names are?

Thanks for reading! Peace and much love!

Bio: I’m a young writer from NYC I want to be a professional writer someday and hope I look good while doing it. I like writing action and romance and even exclusively either. Follow me on Twitter and Tumblr for updates and bug me about my stories!