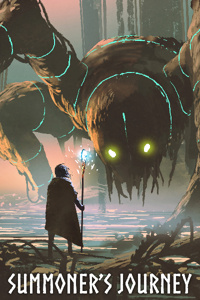 Story is excellent, but it definitely has a slow start. I really appreciate that we aren't getting another magic sword-wielding mage under the all too common bullshit excuses. Also, the main character is noble and optimistic with hints at a darker backstory; regardless, he is a nice change of pace from the overly rational, cynical main characters that are basically their own trope here on RoyalRoad. Don't get me wrong, I love rational characters, but I needed a break.

The character, Elijah, is especially grating in the beginning--he does get much better, however. On the other hand,  I still hope he gets killed off, or that there is some big twist with his character. The other secondary characters are a bit flat as well, but thankfully, they have much more potential.

Something familiar but different

It started of slow and then ramps to 100. A book I'll read more than once. Then biggest downside is the author hasn't release a thousand chapters yet. Because I'd have read them all if I could lol it's a good book. And theres a nice twist and premise in the beginning. Honestly a good read.

Reviewed at: Chapter 11: Choosing a weapon

For anyone looking for a good fantasy litrpg I'd recommend this book.  It's easy to sit down and go through the chapters and watch as the world comes to form from the authors words to your imagination.

The author takes the effort to describe the world through the character's experiences and observations rather than giving lenthy explanations that would interupt the flow of the story.  Throughout it all there is a nice fast paced story with the characters not sticking in one place for too long.

As for any negatives the two relationship between the two mc feels flat.  One instantly offers aid and the other instantly accepts no questions asked.  The first hint of any conflict between the two isn't until Chapter 10 and seems very minor.  There's not much distintion between the two personalities at the point I stopped despite them coming from different worlds.

MC isnt the other worlder for once?!?!!?

Figured once our weird islander friend met the man who fell from the sky, that the sky man would be our new perspective and future MC... BUT NOPE! Author manages to completely keep us in line with island boy and everything is great! You can tell i'm struggling not to tell you everything but that would be spoiling and I cant do that so if a story about an other world traveling companion sounds neat, then you should totally read this puppy!

Seven chapters in and it already shows that it's written with purpose, proper structure and good writting. Proper foundation, worldbuilding through dialogs and descriptions, refreshing lack of infodumps. High hopes for this one.

I am a sucker for this genre

I'm totally biased. I love this genre of story, that is, summoner/magic.

Prose: Good. Not great, but author is quickly improving. Action scenes are great. Some descriptions/scenes too slow/fast but again the author is improving.

Characters: Real. A bit one-dimensional at the moment, but there are a few places their personalities shine through, and it's still very early in the story. I see potential.

Worldbuilding: Not much to say at the moment, will revisit in a while.

Edit: I'm dropping it. Prose is just too rough. Characters talk like they're explaining something to someone all the time, instead of having normal conversations. Reactions to things are hyperbolic.

Reviewed at: Chapter 26: An old friend

I only really have good things to say about this story, so I'll keep it short.

First of all, it only has one POV (up till this point at least), but other supporting characters seem to have their own motivations. Even the ones that aren't part of the "main crew".

Second, it's a fleshed-out world. The LitRPG system is clearly well thought out and is not just a copy-paste. And though we don't get dumped a ton of lore, the bits we get elude to a world with other entities and history. (My bet is that Antillar has used the world for another story/DND before, my best way to explain it would be that the world feels complete and "ready" for the story to take place in it).

Third and a major point for me. Characters seem balanced. It's not just the isekai character that kicks ass, nor insanely trained Viking summoner main character, nor the super-capable-warrior-princess-magical-girl (the story hasn't progressed to where we know her backstory), actually I'd say that it's the completely standard bow ranger + traps build mute-ish guy that has been the most impressive.

The meta part in the description had me scared for an MC that doesn't have blessings/cheats from some external source but ends up as someone that's just inherently OP/Mary Sue ish. But it didn't end up that way :D

VICTO's review is pretty good as a summary/review of the first chapters I'd say. And to add onto that one, the chapters continue to be pretty action-packed, though I think it'd be fair to say that the main story is going to be pretty slow in progressing.

Lastly, I appreciate a new LitRPG without harems, and it's one without health/mana bars at that too, we are truly blessed ;)

4 people get together and jump into a dungeon to save the world, get stronger, and pillage phat l00t. Bit of wuxia with the magic, bit of D&D with the character types, bit of steampunk with the setting. Worth a read.

It's well written, the magic system is novel and interesting, characters have backstories and personalities, the story seems to be going interesting places.

On the other hand, there's a fairly large number of cliches and the writing itself isn't all that engaging to me personally.

However, the tipping point is the handling of the isekai'd guy. It's rare to see that character take up a side character role, and with the setting of the story, it really ties things together.

LitRPG in a good way

I read to Chapter 15 as of this review and so far I like the story a lot. Solid characters, nice pacing and good world building.

Only thing that comes to mind on the negative side is that I would freak out much more, if I came to another world. Minor detail and maybe still explained further into the story. Definitely worth following.

Loved Every Bit Of It

A person gets transported to another world, not like his own. A storm tells the Order of his arrival. They march out to hunt him. He meets a man who saves him from ravenous wolves. They both head out to the nearest town.

And the MC is the guy who saved him. Lol.