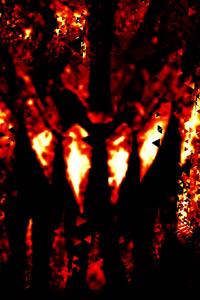 Jio notices smoke in the distance and a wooden wall, assuming it's Bm's village, and as soon as they reach the wall, two Gecko guards by the gate stand on guard with their bodies covered with imposing scales and scutes protecting their bodies from most physical attacks. Jio assesses their strength and comes out of a scenario where intruders lose to the two guards in front of him but not him if he was the intruder.

As the two get closer to the village, Jio notices that the guards speak a different language, and Bm confirms his theory. The guards immediately stop the two and prepare to shed blood if necessary.

"What business does a human-like you two have in our territory?" One of the guards asks and demands an answer.

Surprise that Bm can speak their language, Noah and Henry point their weapons at her and ask, "How did you know our name and the Gecko's language? Explain yourself!"

"Daughter of Grants," Bm answers as her skin starts to change back to her Gecko form and recognizes her immediately and turns back to her refine and pleasing to the eyes form.

"It's an honor to see you back to the village stronger than before, Miss, but who's the boy?" Henry announces as he points his weapon to Jio's face.

"I highly recommend that you don't point your weapon to Jio's face, or he'll kill you!" Bm playfully declares as the guards swallow their saliva, wondering what can Jio do as they let them go through the gate.

Jio looks at Bm and seriously asks her about her status, "You're not the leader of this village or something, right?"

"What do you mean? I'm just a regular villager, and my friends and relatives are happy to see me home," Bm answers with a smile.

Anyone close to Bm by blood will always feel her presence when nearby and will approach her with a warm welcome. The news of Bm's return spread like wildfire, and everyone wanted to see her progress in terms of strength.

Everyone is pleased and proud to produce an exceptional Gecko and a Gecko that efficiently changes appearance conveniently. A slime beast, to be precise, then a Gecko.

Eventually, the crowd surrounding the two diminished as they returned to what they were doing.

"In your continent, the Human Race and Monster Race live in peace, so the people don't have enough information about the Monster Race," Bm let out as they continue to walk somewhere secluded.

"I better ask more questions in the future," Jio states.

"Big Sis! We can't believe you get this powerful! Teach me your secret!" Sun (Boy) announces in Gecko language as he hugs Bm.

"You look so beautiful! Do you think I'll be beautiful like you, Big Sis?" Moon (Girl) lets out in Gecko language as she hugs Bm.

After they greeted their sister Bm, they curiously looked at Jio.

"I'll tell you, twins, later," Bm answers and continues, "You might have noticed Jio, a human."

The twins instinctively take their weapons out and point at Jio, but Bm immediately tells them to put their weapons down and explains that he's a guest. Bm understands the twins' actions and properly introduces Jio to the twins.

"Anyways, you twins want to spar with Jio?" Bm asks as she looks at Jio.

"Guess I can't decline to this one," Jio let out.

"Try to do your best, Moon and Sun. He's not a human, you take lightly," Bm giving the twins warning and winks at Jio.

"You don't understand, sister; Moon and I train hard over the years, and Jio looks weak," Sun arrogantly let out.

"And two Geckos against one fragile human is easy like getting thrown to a cliff when Sun and I was one year old and survived," Moon continues.

"So... Where do we spar anyways?" Jio curiously asks.

"Tomorrow in the Dome, which is another hour of walking where most monsters entertain themselves by watching other fight or fighting one another," Bm replies as she takes a scroll out from her storage ring and gives it to Jio.

The scroll contains information about the Dome, like the rules, location, history, and purpose that quickly caught Jio's attention. According to the scroll, the humans they captured will fight to the death and need to win one hundred times to regain freedom.

"Looks like you obtain something from devouring the Dark One," Bm lets out after she notices Jio's aura or energy through Jon, Jio's soul weapon.

"I'm not sure yet; I can feel the demonic energy in my body, but I can't let it out or something," Jio replies.

"I see, I'll let you meditate alone, and I'll try to catch up with my twin siblings," Bm said and walked closer to Jio and kissed his cheek.

Wondering about the Dark One's power, Jio sits cross-legged on the tree branch and meditate. In the middle of the night, Jio heard howls in the forest and reminded him of Mrs. De Vil, his mother, and her Soul-Familiar.

"Soul-Spirit," Jio whispers and thinks of how to summon this power.

In Jio's knowledge, Soul-Spirit is born from thick and compressed magic or energy and becomes a self-aware being. Soul-Spirit uses a host to get stronger and potent, but greed always makes the host attempt to absorb the Soul-Spirit to have its power, and most fail miserably, which drives the Soul-Spirits to stay away from any creature other than themselves.

Early in the morning, the group starts to head their way to the Dome while the twins keep their eyes on Jio, making sure he's not a threat to the Monster Race or to their sister.

Jio takes Jon out while they're walking, catching the twins' attention as Jon slowly covers Jio's body and morphs into a smooth, plain-looking, and black armor. The twins can not believe what they saw and when they think the transformation is finished, wings come out, growing from Jio's back. Bm looks at her siblings and smiles at the twins.

"You know you two can kill me inside the Dome," Jio discloses as he throws the scroll he received from Bm and let out, "You two can try."

Sun immediately takes a dagger out, but Moon quickly stops her twin brother and realizes Jio's wing extends with the tip pointing at their heads.

"Jioooo, you don't need to scare my siblings like that," Bm let out like she's having fun.

Bm and Jio laugh and talk the whole way while the twins keep their distance and keep an eye on Jio. The twins don't like humans.

When Jio notices houses and buildings, he knows that they are getting closer and is curious at the same time since he can't recognize most monsters or species like going to a zoo for the first time as a kid.

During the hike, the twins saw their sister happy with Jio and realized that the sister they knew had such a beautiful smile they never knew existed.

All of a sudden, Sun asks Jio out of nowhere and points a Slolecene, "You know who's that guy is?"

"He's the fastest Slolocene there is, and his name is Page," Moon said out of nowhere.

"That's good to know," Jio replies to the twins.

Slolocene - a sloth-like in human size with smooth hair and razor-sharp claws.

"We're lucky to use the Dome this fast," Sun said.

"Since it's always packed and requires registration and will take anyone a whole month before we can fight inside," Moon continues.

"Be ready since you three will be fighting first (1st), and the Ancient and Sierra will be watching, so do your best," Sun and Moon listen to their sister and look at her with admiration.

The Dome is the same size as the Hell School's Coliseum, and the only difference between the two is that the Dome is like a cage-like design where monsters kind and humans fight for their lives but not all the time.

In the entrance, Jio looks at the two Gecko statues standing majestically, which caught his attention, and before he can ask who the statues represent, the twins answer the question in his mind.

"That's our father and mother," Sun and Moon said together.

"They sacrificed their lives to save everyone that day," Bm looks at the statue with respect and continues walking towards the Dome's entrance.

"I see," Jio said and made him think why the twins dont like him from the beginning.

After Bm shows the token she received from the Ancient to the gate guards, they immediately bow their heads and give instructions to the fighters and spectators.

As the Dome's cavea get filled by spectators, the announcer welcomes everyone, "Would you believe that the Ancient, Sierra, and Miss Gecko is here watching with us! We're lucky to be with them today!"

The Dome trembles from the cheering crowds, and the announcer continues, "On the left side, The TWINS! Sun and Moon!" The announcer announces while the crowd roars, "On the right side, Miss Getko's unknown friend!" The mass starts to boo because of Jio's human-like appearance, and everyone thinks that his wings separate him from becoming a human.

They don't have the slightest clue.

Suddenly, the Ancient somehow managed to walk into the center of the arena with Sierra and Bm without anyone noticing them, which surprises everyone in the Dome.

"To all my brothers and sisters who live in Sera Madre with me, I wish you all good luck and hoping to get everyone's support when the time comes," the Ancient lets out with his eyes close as always for hundreds of years and never changing appearance with a human figure made out of stone and purplish light glow coming out of the cracks around his body especially cracks around his eyes.

"Today is the beginning of what I foresaw... A long time ago, and I thank you all for the future sacrifices... Thank you," the Ancient bows his head after he passes the words he wants to say.

Dumbfounded by the Ancient's words, everyone stared at him since he's been the protector of Sera Madre for hundreds of years, and they supposedly bow to him, not the other way around.