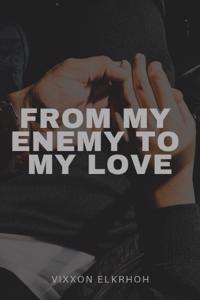 From My Enemy to My Love (bxb)

"What did he say?" Gareth asked me again as Alex and Vincent walked out into the hallway.

"If what Alex says is true and Vincent didn't mean it, then it doesn't really matter anyway," I said. I stepped away from Gareth and went to the small table. I took a cookie and shoved the entire thing into my mouth. But was Alex right? Because it seemed like Vincent meant every word. But then, why would he continue to be friends with Alex if he knew he was gay and thought it was disgusting? He said he was protecting Alex by trying to get rid of Mateo. I didn't doubt Vincent believed it when he said Mateo was out for Alex's money. He was wrong though. Mateo's family were not poor and most importantly Mateo was not that type of person. But did Vincent mean it when he said Mateo was disgusting because he was gay? I got the impression that Alex knew exactly what Vincent had said. I trusted Alex so when he said Vincent didn't mean it, he must not have meant it. But then why even say it?

Ugh. I was confused.

I didn't realize Mateo was right next to me until he spoke.

"Vincent confuses me too," Mateo said. "He genuinely cares for Alex. That is clear, but right now that is the only redeeming quality I see in him. He thinks everyone is out for his money. As if money is everything. And he's rude and blunt. He hates me for no real reason."

Mateo nudged me. I hadn't realized I was just staring at the cookies until then.

"Are you sure you're alright? What did he say to you?"

"If it was something bad about me," Mateo said, "don't worry about it. He's just looking out for Alex. I'll win him over eventually."

I nodded but felt strangely empty. People rarely affected me this way. It was more than the words he spoke. It was more than Alex saying he didn't mean what he said. When Alex called him out there was something in Vincent's eyes that haunted me. He was hurting. Did I just ignore that because he hated my best friend? Maybe. I mean, what could I do about his pain anyway. Nothing. He wasn't my friend.

"Hey. How long are you going to stare at the cookies?" It was Gareth this time. Where had Mateo gone? I looked around the room. He was across the room with Alex. I had been in such a daze I hadn't noticed when Alex returned. I looked around the room even more, but didn't see Vincent anywhere. He would have been hard to miss. Not only was he tall, he had a presence to him that demanded attention.

"Do you want to go lie down?" Gareth asked.

"But I thought you were going to sleep over. Or if you wait a bit, I can give you a ride home."

I pulled out my phone and looked at the time. "No. It's alright. I can still catch the bus. I'll just see you later."

"Are you sure because..." I was already walking through the crowd to the door. "Fine. Goodbye," Gareth called after me. I waved a hand back to him without looking.

I stepped out into the hallway, but before I could take another step someone grabbed my arm. "You're not even going to say goodbye?" Mateo asked me.

"You were busy," I said. "And it's not like I'm never going to see you again." He looked back inside at the crowded room, outside in the crowded hallway and then he pulled me further through the hallway to a quiet spot.

"Are you sure you're okay?" He asked. "Because you don't seem okay."

"It doesn't have anything to do with me does it?"

"No." Well maybe indirectly because Vincent had me confused and I never would have met him if it hadn't been for Alex and Mateo.

"Look," Mateo said awkwardly. "You were the one who rejected me. I didn't think you cared if I dated anyone else."

"What? No." I had completely forgotten that Mateo asked me out when we were fourteen. I had rejected him nicely. We became even closer friends and that was the end of that. Neither of us had ever brought it up again. "I'm happy you are with Alex. He's a good guy. Honestly, I haven't ever thought of you like that and I had kind of forgotten you even asked me out."

Mateo sighed. "I guess I shouldn't be surprised," he said. "Although, I've got to admit it hurts a little that my first crush forgot me so easily."

"I was your first crush?"

"I told you. Don't you remember?" Now he was becoming exasperated with me.

"Of course I do," I lied. No. Not lied. I hated liars. I exaggerated so I wouldn't hurt his feelings.

"It was for the best anyway," Mateo said as he looked down the long hallway back in the direction of his apartment. "I think I love Alex. And I should thank you for keeping my secret all those years. You never told anyone. Not even Gareth. That was the first time I knew that even though you like to talk a lot and are kind of a snoop, you can keep a secret and are a true friend."

That made me smile.

"So you're not leaving early because of me?" he asked.

I held back the laugh that almost escaped my lips. I didn't want to hurt his feelings. "No," I said. "Go back inside and be with your boyfriend."

Mateo smiled grandly at me and clapped me on the back of the shoulder. "You're a good friend," he called out to me as he was already rushing back down the hallway towards his apartment.

I was a good friend.

I made my way out of the building and onto the sidewalk by the parking lot. I stopped when I saw Vincent leaning up against a beautiful silver car. He looked at his phone. The light from his phone illuminated his face in the dark Autumn night. His unique eyes flickered to me. I had never seen eyes like his. They were a golden color with a rim of darker brown on the outside. Maybe that was why I had noticed the pain in them earlier. They were hard to look away from.

"I'm going to make my friend break up with yours," he told me flatly.

"Then I'll stand in your way to keep them together," I replied.

He frowned at that. "Then you are my enemy," he said.

That seemed dramatic. It wasn't like I was going to physically fight him and keep him away from Alex and Mateo.

I shrugged. "You aren't mine. I just want my friends to be happy."

"Then you should leave him alone. He's happy with Mateo."

"That is a false happiness." He stood up straight and opened his car door. "I've got to break them up now before Alex falls even more for your fake friend. He's been through this pain before. I'm not going to let him go through it again."

He started to get into his car, but he stopped when I said, "Mateo won't bring him pain. Mateo loves him."

He scoffed and rolled his unique eyes before he got in his car. I stood there in silence as he started the car and drove away.

I wouldn't let Vincent's stubborn misunderstandings ruin what Mateo and Alex had. I looked at the time on my phone. Great. Now I had to run to catch the bus.

Support "From My Enemy to My Love (bxb)"

Bio: I've been writing on Wattpad and thought I would also post my stories here. I write bxb/mxm romance novels. There is mature content in my novels.