Reborn on a Systemless Earth... With a System

Chapter 51: Arrival in the Land of Grapes

And finally, in the end, comes to a complete stop.

Delta, still glancing at me in annoyance every now and then for reasons I am beginning to suspect I will never be able to understand. Francis, on the other hand, is absolutely absorbed in his phone, and whispering various witty comments. I think he’s doing more video game streaming.

I look over to his phone, and yes, he is indeed playing Royals of Foreign Lands Mobile, currently engaged in some sort of large-scale battle while protecting a certain area. He is very good at these video games!

“Now stopping at Paso Robles,” an announcer says in a loud voice to the entire train car. I have noticed that this phenomenon happens often; people are able to project their voice across rooms, buildings, or even entire city squares through, I assume, the magical power of electricity.

The train cars open on their own, and we pick up our bags from the storage area. I have a backpack filled with clothes and toiletries, while Delta and Francis have one small suitcase each. One thing I am particularly impressed by is the fact that both of these suitcases are not being held up by hooks or straps, but rather they have miniature wheels and are being dragged around in that way. It allows them to spare their phyiscal strength by putting all of the force into the wheels, rather than into their arms. Wow, what genius design! I wish I had a suitcase now, all of a sudden.

I walk through the door and onto the train platform, and then the other two follow, seemingly paying no attention to their surroundings. I, on the other hand, am intensely absorbed in doing so. This station, this landing platform... It feels quite similar to the one from San Fransisco, being clean and well-paved, but much smaller. It is as if we have been transported from a vast metropolis to a small town on the edge of nowhere without making even a small effort on our part. In only six hours, we have completely changed our locale.

As far as I am aware, though, Paso Robles is still in California, and still near the coastline, just much further south than San Fransisco. The temperature still feels extremely hot though, that’s for sure. Sweat almost immediately forms at my forehead when I step into the arid, sunny weather of this new town.

For some reason, there are fences blocking the train platform off from the rest of the town, which looks to be quite sunny and vibrant. I assume this is to keep children and animals away from the dangers that come with a giant moving vehicle passing through, and that other people are meant to clear the fence with a test of their skill. I find that to be a bit rude and demeaning towards those who, say, have a physical disability or otherwise do not possess the abilities required to easily climb over (such as Francis, most likely), but I decide to test this out.

I jump clear over the fence and land on the other side with a graceful squat and touch of my fingers against the dirt.

I look back at my friends. Delta’s stares have grown even more disapproving. Francis still hasn’t taken his eyes off his game.

So much for adventure...

Okay, it turns out that I was supposed to go through an automated ticketing system for accounting purposes, and that I was violating some sort of laws by jumping over the fence without depositing my ticket. I am starting to learn that trusting my assumptions about the way Earth works has lead to and will continue to lead to some awkward and even outright idiotic situations. Sadly, I do myself no favors when I jump to conclusions, but I doubt I will be able to stop it anytime soon. My mind was simply not designed to think in terms of rationality and caution.

Once all of that is sorted out, though, the three of us are good to go on figuring out what to do next. As usual, Francis and Delta have already made a plan and have simply declined to inform me of exactly what that is.

“Let’s check into the hotel first,” Delta says. “Then we can find a map or something.”

“Does this city have a bus service?” Francis asks. “I really don’t wanna do Ubers all day if we don’t have to. Not that... I’m stingy with my money or anything. I just like getting good value.”

“Francis, there’s a bus stop literally right there behind you.”

“I like buses,” I say. “I feel that they are not as nice as trains, but their wheeled capability allows them to travel wherever they want to go, rather than trains which must stay on the railing to which they are attached. It makes the entire situation much easier. If only there were some sort of hybrid train-bus that had road-driving capabilities but also pulls a large amount of passengers at once...”

Delta turns to Francis. “Should we... show him Disneyland later?”

“I don’t want to get a cease & desist, so probably not,” Francis says.

We wait for the bus and take a ride to our hotel, our temporary place of residence for two nights only. It is a wonderfully interesting place, consisting of dozens of rooms on thirteen floors. I have stayed many a night in hotels and taverns and other temporary residences in my time as an [Adventurer,] but they have never been as much fun to me as camping out in the wilderness with my close allies. However, this particular hotel is extremely inviting, intensely interesting from the outside. I can tell that this is going to be a very, very nice place. There certainly is a reason they call it the Quality Inn, after all.

In fact, with how pretty this small town is, and how aesthetically appealing the hotel’s outside is, I can almost feel something inside me, like....

I want a Destiny Point for it, but I guess my system requires a more clear-cut example of discovery and wonder before it will award me a point. From my time on Mystix, it was extremely rare when I ever earned a Destiny Point for anything related to exploration and discovery, but I found that the best instance for this was to stand on a high point overlooking a wide swath of the world, and to take that view in.

Now I am slightly upset that I received nothing back in my dream when Miss M showed me a view of the entire Vast Continent up on that mountain peak. I guess even places like that have been long explored in a place like this.

We receive our “key cards,” which are slips of plastic that will apparently open our hotel room when we find it on the tenth floor. I am incredulous about this except that the wonder of electricity does not seem like it will ever cease to surprise me. Perhaps even something like this plastic will somehow lock and unlock a door automatically.

“I wish I could master electricity with my system,” I say mostly to myself.

“Because of all the wonderful things you can do with electricity,” I answer. “It’s far better than anything normal magic on Mystix can accomplish. Sure, we can generate fire or ice, conjure up spirits, capture souls in gems, draw mystical cards linked to our destinies... but we can’t send messages across space. We can’t look up any kind of information we come across in a mere instant. We can’t create moving images that will be seen by other decades in the future. We can’t cool an entire building through strangely shaped boxes and ventilation systems. Electricity is something fearsome. If I had control of it and brought it to Mystix, it would simply destroy the way of life as we know it there, and replace it with something far superior. Earth is a utopia and I would very much like to figure out why.”

“Hell if we’re a utopia, but I really never thought of it that way,” Francis says. “Maybe we do have it pretty good somehow.”

And, just as I predicted, the key cards work exactly in an magical way. One tap of the card against the door, a beep later, and the door is automatically unlocked.

We enter the hotel room and an unfamiliar smell hits my nose. It is an odor that smells clean, and yet dirty at once. It is the odor left behind by a thousand previous guests combined into one, but after sanitization, after cleansing and cleaning by housekeepers. It’s inviting and yet safe all at once. I have never smelled anything like it before.

And I get a look at the room itself. It is small and cozy. There is a TV on one side, a full-sized window that opens to a balcony outside, and... Wow!

“Please, please tell me you didn’t do this on purpose,” she says.

“You swear you’re just an idiot?”

“I don’t know what you’re discussing,” I say, “but look at this thing here! It is the biggest bed I have ever seen in my life!”

Right against the wall opposite the TV is one gigantic bed, one so big that surely four, even five people could sleep on it at once and feel at least mildly comfortable. Perhaps that is a bit of an exaggeration, but it fills my heart with glee just seeing it. Sure, I prefer a firm sleeping place, often even the floor, but the sheer novelty of this situation is enough to make me very happy.

Instinctively, I begin jumping up and down on the bed. Woo-hoo!

“What are we gonna do?” Francis asks.

“Deal with it,” Delta says. “Awkward situations are what happen when people book hotels while also being morons.”

I get down from the bed and examine the balcony. Being ten floors up, it is clear to me that I could get my best chance at a good view now. So I step outside and gaze at the city: 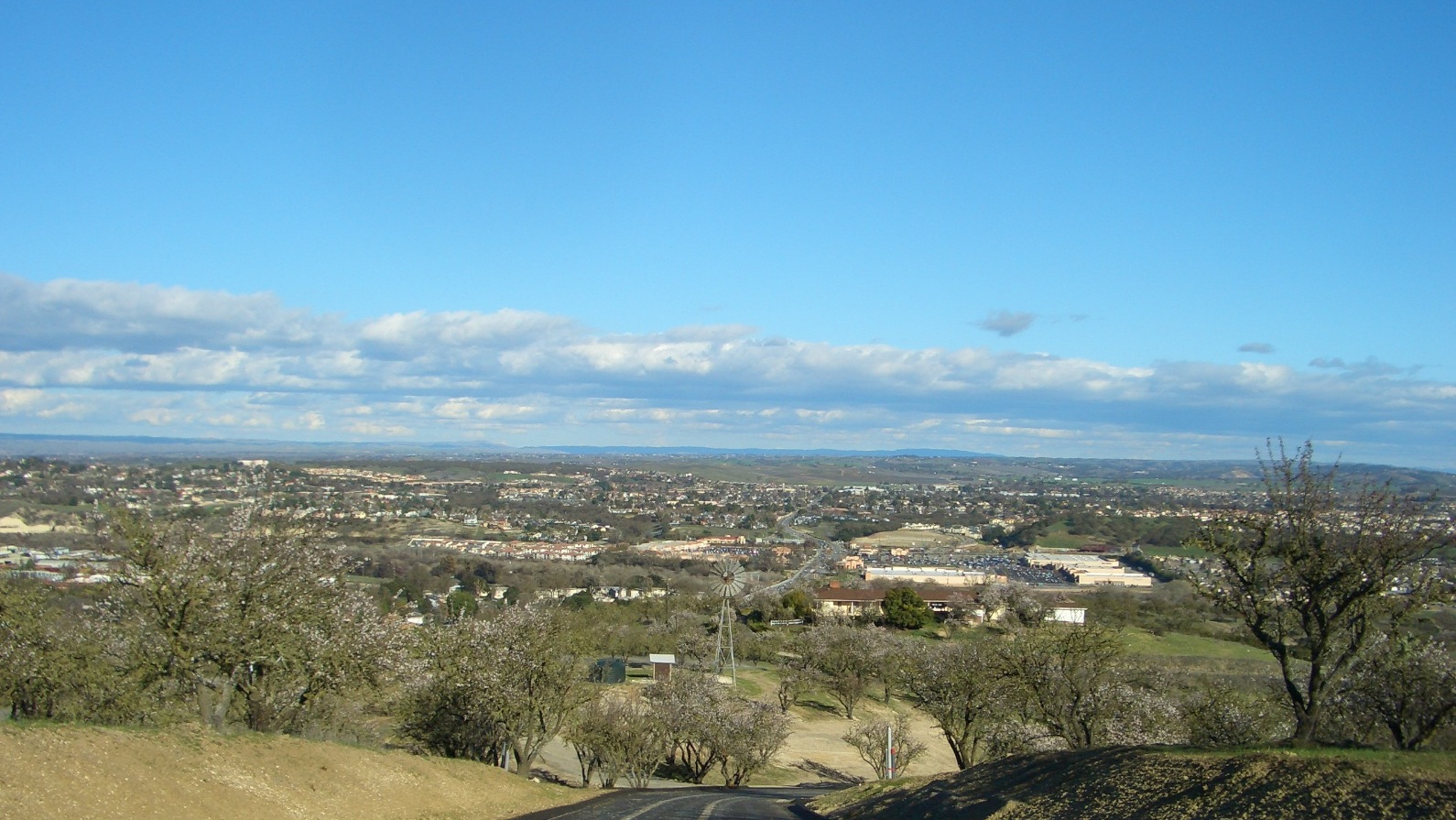 The rest of the day is going to be very fun, I can already tell.

Here begins a new onslaught of chapters in my attempt to win the Write-A-Thon. Be warned that many chapters will release today.

Support "Reborn on a Systemless Earth... With a System"