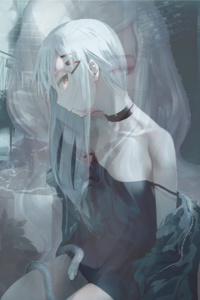 If you were told there was another unseen world hidden in plain sight, would you believe that?

If you were told invisible otherworldly beings pulled the strings in the background for their own sick and twisted amusement, could you accept that?

Diogenes Genovese, a man of science who denies the unbridled reign of gods and demons, struggles through the adversity and opposes the unjust world he finds himself a part of.

Bombarded by a string of ever escalating calamities and disasters, his beliefs are tested; pushed to never before seen extremes, while surrounded by a slew of lunatics, he seeks out the truth of the irrational world we live in.

Volume 1 prequel, "There’s No Way My Girlfriend’s a Psychopath," available on Amazon/Kindle Unlimited.

This story is crying for a genuine summary

Current summary exist only to fool potential audience. It contains author pointless philosophical monologue about isekai (I found this story by key word "isekai", naive me) providing no clue about the plot. I wasted 3 hours to reach 22 chapter and dropped the story.

No doubt, this is well written stuff. But, for god sake, I expected something absolutely different, and it took me a while to abandon hope.

Dio is incredibly unlucky guy. All his ex girlfriends are insane. And this is not "erotically crazy" but "disgusting crazy". This is straight horror, and sexual content here barely exist. Mostly way more deaths than nudity.

And Dio is so deep in denial of supernatural, that it pisses me off. Full "don't do that" experience like in classic horror movie.
Check the story out, if you like this genre.
Not my cup of tea.

99 Problems and all of them are women

Ghost Girlfriend is excellent. Wonderfully suspensful, spooky, and eerily slice-of-life, our boy Dio is just some guy who's trying to find his way in life. Go to school, get a job, get a girl, maybe wife her. Simple, right?

No. Not for Dio. Dio has terrible luck with women, his choices haunting him in his every day life for years now, but it seems the final straw to our man's sanity here will be one not entirfely of his consequence.

My only hope is to see the conclusion of his actions as the tribulations and his shoddy luck carry him forward into the unknown.

What do the two letters QE mean and how does it relate to this review? You’ll probably get a hint only if you’ve read volume 2 since volume 1 is actually very deceptive in nature. I have to admit that the author did a really good job veiling an entire genre under the guise of a seemingly simplistic story. I’m pretty sure the author purposely left it out of the genres since the genre alone feels like a total spoiler itself if you saw it beforehand.

Overall the story is actually a lot more complicated than you’d expect and it’s cleverly hidden under a veil of smoke and mirrors. A good analogy for this story would be volume 1 and volume 2 are two halves to the same coin. As for the way the web version ended it only really makes sense when put together with the alternate version in volume 1 added in with volume 2.

Even the afterword in both volumes seemed to somehow be connected in a strange way. Somehow the afterword of volume 2 felt completely out of place to me and I was completely thrown for a loop because of it.

The ending in general leaves you with countless unanswered questions and it was definitely done intentionally.

What is death really? Is there really nothing after death? Is reincarnation or transmigration really just fantasy?

What if it was actually something completely normal, and it was not as magical or mysterious as we thought it was? What if there was a scientific reason behind it instead but it just didn’t particularly fit with what we considered as transmigration or reincarnation. What if there was also a scientific explanation as to why you could or couldn’t keep your memories when being brought to “another world”?

Just who or what is Dio really anyways?

Well the author really doesn’t confirm anything. Everything is vague, but at the same time not vague. You’re constantly left in a grey area where the author, like a game master, makes you choose for yourself what is the truth while he pulls all the strings in the background.

I’m sure the author thought people would choose between only the two options presented, but QE makes me think otherwise. I say both options are correct with regards to Dio. That’s just me being a rebel though.

I definitely can’t say this is a story for everyone, but I definitely enjoyed the hidden thought provoking side of it. If you’re looking for some sort of overpowered MC who’s completely broken and unstoppable you really shouldn’t bother reading this. If you’re someone who enjoys being thrown for a loop and left confounded, baffled and questioning everything you know, then this is a perfect story for that. It’s very deceptive and I’d say it’s a pretty underrated story. It’s really a story that seems simplistic, but is actually much deeper than you’d think upon first glance. If you fall into the trap of only looking at the surface level of crazy exgirlfriends and ghosts you’ll miss a lot of what’s actually hidden.

Instead, what you should really focus on is what is the meaning behind the sequence of distorted events. What is hidden in them. How do they happen? Why do they happen? Basically the who, what, when, where, why, and how.

If you don’t want to think too much about it or even find it’s too scary to actually think about it, then just sit back and enjoy the horror on the surface along with the occasional bits of humor. It’s enjoyable either way.

The story for me was a 5, style was also a 5, grammar I didn’t pay much attention to. There were some places that could maybe use a bit of editing. I don’t really care too much about it though. There wasn’t anything overly distracting that stood out glaringly to me so I’d give it a 5 as well. I personally liked the characters so it’s a 5 for that too.

Thanks for the story.

I really enjoyed the first volume, it was intense and the way the mc tried to be unpredictable while describing his thought process was amazing. You always know why he thought what he did made sense. I bought the second volume and thats really missing. There are more conversations with less thoughts, the mc appears less smart as well. It feels very different from the first volume, maybe the short chapter style were better at maintaining the pace of the story or you went back and edited more or some other thing changed. But regardless i did really enjoy volume 1, the pace reminded me of works like other great works like Steins Gate.

Came for crazy stayed for the story

The main character Dio is such a poor chap that you can't help but sympathise with him.

This story bring so much more than just a cheap isekai adventure, with all the weird supernatural incidents happening around Dio , you can't help but wonder if he's going insane or not. Alongside the underlying mysteries surrounding him , this novel really brings too much to the table to not be a published book

Kudos to the author for such an enjoyable read 😂👍👍👍

Dio, our lord savior and absolute madman of a Tank takes on the love, attention, and affection of all them Waifus, so the rest don't have to.

You only ever want these Waifus in the fictional parameters, and never IRL unless you like being terrified but horny. Alpha Waifu is legit animal. No joke, she would eat you, and you wouldn't even be a mention in her memories. maybe as like an ok macaroni and chilli dish, but who remembers those? you just know you ate something that day, and for her that something could have been your entire family. This ain't even like the main reason you should not piss her off, and she was DIO'S FIRST WAIFU!!! this boy seriously got all the luck and none at once when its with women. Newest Waifu might seem sane so far, but like think yo black bruhs crazy cousins girl that you think wants to be a baby mama but she seems chill at first and all but more you get to know her, more things start to settle into the "this is fine" house on fire dog drinking coffe meme. big O'l do not touch. No matter how sexy that woman be, do not touch or be ready to go down and in on some real wack ####### potentially, you won't even realize man. She that good at setting the pace. Oh yeah, then theres GHOST WAIFU!!! Long story short on her, there aint no short version man.

TLDR: Dios life soundtrack is a mixture of its always sunny in phillidelphia, some alternate extremist version of manga Girls Saurus, and something from the looney bin season of american horror story with all the crazy stuff stirred in. A+++ Dio takes more than one for the team.

If you decide to read this, you're in for a good read. A good time though? Unsure. Maybe more of a cautious advisory tale than anything. If I've learned anything from what I've read though, it's that any day you live through is one you can call a day you won. At least from a survival standpoint.

Salt has power. But sometimes even salt can’t save you from ghosts

An unique story that's quite different from others. Characters are well made. They feel alive. Only the occasional grammar mistake every few chapters or so.

It's an interesting story about a man, some crazy ex-girlfriends, and a VCR tape.

I do wish Adele could've been saved though...

Read this ‘story’ if you want to be a bald dude

I literally have one figurative patch of hair left after wanting to pull my hair out because of how idiotic the MC is. He's frustrating and tbh this story is just cringe at times. I would steer clear of this one unless you can rock the bald look.

First of all, it is not an isekai, but do not go out yet.
The story is about an ordinary guy with horrible luck with women. All his ex-girlfriends are very beautiful, but their psychological is compromised. On top of that, strange supernatural phenomena start to happen around the MC.
But this is only the first layer of the story while the others remain hidden.
If you like suspense, horror and psychological, it is a must read. For those unfamiliar with the genre, give it a try.