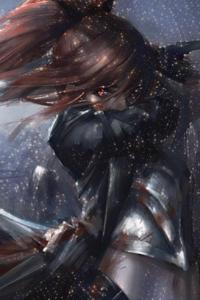 I was Summoned as a Hero, but I Became the Demon Lord Instead

I inspected the detached arm in front of me more closely, I first tried to somehow move my fingers, however, no matter how much effort I put in I couldn’t even get it to twitch.

I closed my eyes and checked if I could sense the presence of my arm, but in the end I sensed nothing. It was like my arm was a completely separate entity with no relation to me at all. Yet, how was that possible? There was surely some sort of relation. If there wasn’t, why did my arm only regenerate only when it was completely destroyed?

Was it related to mana then? My blood served as fuel for Yueliang that she converted into mana. Her intent was to use it to fuel a powerful magic to break her seal. But just where did this endless supply of energy come from to begin with?

If I think of my blood as gas and mana as the conversion of that gas into another form of energy, such as electricity, then shouldn’t conservation of energy still hold true? It can’t really be possible that I’m an endless supply of mana birthed from nothing, right? Every source of energy is finite, so where do I derive the seemingly endless supply of energy required to fuel the immortal object ability I was bestowed with?

“Is it from the surroundings?”

“It’s from the plane in which gods reside.”

A familiar voice I didn’t expect rang out abruptly from behind me. She threw formalities out the window and immediately pushed me down and pinned me to the ground.

“As compensation for answering your question I’ll be taking double today. I’ve been wondering how it would taste in this position.”

I never saw it, but based upon the sound from behind, she’d licked her lips greedily right before she plunged her fangs into the back of my right shoulder. While she straddled my back, she sucked away full force until the last drop of blood disappeared from my body.

When she lifted her head back the immortal object message appeared in front of me as usual. That was when I suddenly realized, when this regeneration was most active it was actually the best chance I had to understand my ability.

Was it just a coincidence she showed up right now for her meal, or was she trying to provide me with an opportunity right now? She’ll definitely never answer me honestly even if I asked her about it. She’d just claim she’s only here for her daily meal as usual or something.

At this point I didn’t resist her in the slightest, I let her have free reign over the blood in my body. I closed my eyes again and focused on the instant the blood in my body regenerated. It was honestly a strange feeling, it didn’t hurt at all whenever it regenerated, rather it always felt strangely pleasurable like the inside of my body had somehow been cleansed.

As time went on, she drained my blood over and over again until slowly, but surely, I noticed a small, almost negligible difference. The blood that regenerated, although it was nearly unnoticeable, it definitely felt like it was filled with more vitality. I only vaguely felt it was a smidge purer than before and the concentration of mana that Yueliang converted from it had grown a bit, although the degree to which it changed was practically insignificant from when she drained my blood from a single cycle to the next. It was only if I compared it from the beginning to several cycles apart that the change was distinct enough to pick up on.

I somehow benefitted from her repeatedly sucking me dry. Just to be clear, it was definitely not in a sexual way. Although I can’t deny that my thoughts were led astray at times due to the lewd nature of the act. It’s also pretty mentally taxing trying to stay calm whenever her chest presses up against me when she eats her fill.

“Yueliang, what is the meaning of this?”

“It seems your abilities as an immortal somehow shares a connection to my immortal bloodline. It feels like it’s on the same level as my bloodline, one that once existed in the plane of gods. I don’t know much more about my bloodline aside from that. My parents were unable to pass down any information to me. But it appears that draining your blood like this will aid in strengthening your ability as an immortal in the long run.”

“Why are you suddenly being so cooperative and telling me about this now?”

“Hmmp! Don’t get cocky, it was just a passing whim of mine, nothing more. Also, I’m just having a meal, if eating more makes the meal taste better, then why wouldn’t I eat as much as I can?”

When she finished her tsunderish line, she ruthlessly crushed my head to dust and vanished as abruptly as she first appeared.

I found it really difficult to fully wrap my head around her. She was troublesome to deal with, very grouchy at times, and extremely hard to read.

During this feeding session, I faintly detected a strange sensation, albeit just barely. I wasn’t referring to the sensation of her chest on my back though. It was the feeling of energy flowing into my body from an unknown origin. Rather than it being mana, it felt like son energy source a level above it. I wasn’t certain, but it felt like something combined with mana that formed a more saturated energy of a superior grade.

I focused my senses on my detached arm and checked whether the same energy resides inside it. Luckily, after a bit of time passed by I discovered it. I successfully confirmed that energy was one in the same as what flowed through my body. Although very faint and vague, it definitely resided inside my detached arm. Was this form of energy something that originated from what she called the plane that gods reside in?

After some time spent in deep concentration, I discerned that there was actually a very fine flow of that energy connected between my arm and body. I postulated it was due to this connection that my arm did not grow back.

If my theory was correct, if I severed this connection one of two things would happen. I’d either lose the arm for good, or it would very likely trigger my arm to regenerate. I was more inclined towards the latter outcome.

I practiced and attempted to manipulate the strange illusory energy I vaguely sensed. I focused the energy into the tip of my thumb and index finger on my right arm. It was surreal as I somehow felt the energy as if it rotated in between my fingers like a flat disk directly beneath the surface of my skin.

With my thumb and index finger, I pinched at the fine string like energy that connected my body to my severed arm. The moment I squeezed down the string snapped in two pieces.

Right before my eyes, the arm that was once there disintegrated into nothingness. What followed soon after its disappearance was an immortal object message in front of me.

I actually sensed the energy when it returned and reformed itself around my left shoulder. It extended out autonomously and recreated my arm attached without any trace of residual scars.

I was astounded by the process and my intrigue grew stronger than ever before as a result. Was there a way to utilize that energy as a destructive force instead of only a regenerative one? Could it possibly explode or detonate in the form of an offensive attack? Or better yet, what if I controlled my hand remotely and created Thing from a certain family sir named Addams? Wouldn’t that be super cool?

How do I do either of those things though? Would it be possible if the string was more robust, bulky, and thick? If I gained better control over the energy, was it truly a possibility? Actually, was it possible to create multiple hands with this ability? What if I could get my arm to regrow while keeping the connection to my detached arm? Wouldn’t I become an unstoppable Asura who could wield thousands of weapons in hand at once? With an ability like that, couldn’t I become a god of war heralded by all and looked down upon by none?

However, all these ideas sounded like they were considerably high level and required a lot of time and energy, much more than what I presently had. At this time I was equivalent to a toddler who’d stumbled upon electricity for the first time. I shouldn’t get ahead of myself. Potential applications should come after I have a better understanding.

My first objective should be to increase the abundance of this energy and learn to better control it at will. How to do that is the real problem right now.

It seems Yueliang sucking my blood is one method I can use to purify and make the energy I presently have stronger, but is there a way to increase the quantity of the energy I can host inside my body? If my body is equivalent to a bottle then it naturally has a capacity it can house within it. Would simple leveling up in this world work to increase the size of the bottle? What about destroying my body a few hundreds of thousands of times? Maybe that would allow me to create a sturdier container that could withstand higher pressures of that energy. Well, I’ve got all the time in the world to figure it out while I’m down here with nothing urgent to attend to.

I’m not really in a rush to get stronger or anything. I can just take things at my own pace and slowly work my way through the dungeon. Like Yueliang said, it’s going to be about a year before she’s able to break the seal after all.

Ah! I almost forgot why I worked so hard to begin with. I focused myself once more. I glared with squinted eyes resentfully at the ceiling above. When I found a fine string connected between my head and the ceiling, I pinched the string; the connection then split in a similar fashion to what happened to my arm earlier. Another immortal object message appeared and my head suddenly felt heavier than before, it signalled to me that my plan was a grand success.

After my success I forgot all about that cursed bunny. I gleefully went on my way and practiced manipulation of the newfound energy I’d discovered.

I was Summoned as a Hero, but I Became the Demon Lord Instead
Volume 1 (Word Count: 108K)